Does night light increase the risk of thyroid cancer by 55%?

Are you still worried about whether you should turn on the light to sleep for fear of darkness? A study may help you “solve” this trouble!

Recently, a study from Cancer showed that brighter lights at night can increase the risk of thyroid cancer.

Too bright at night increases the risk of thyroid cancer

The study included 464,371 adults. The researchers conducted a 13-year diet and health survey on them and recorded their residences. With a median follow-up of 12.8 years, 856 people suffered from thyroid cancer. It is worth noting that this study started with outdoor lighting at night and did not involve indoor lighting.

The 856 cases of thyroid cancer were analyzed, including 384 males and 472 females. According to the light level of the house, the group is divided into five subgroups.

Studies have shown that compared with people exposed to the lowest night lights, people with the highest exposure levels have a 55% increased risk of thyroid cancer (HR 1.55; 95% CI 1.18-2.02), and their thyroid cancer types are mainly papillary thyroid cancer .

The reason, the researchers believe, is that the exposure of night lights destroys the body’s biological clock, thereby increasing the risk of thyroid cancer.

Many foreign netizens have “criticized” the research. They said:
Street lights and neon lights are the signs of the city. There are thousands of other carcinogens. Are street lights chosen because they are lucky?
Studies have also shown that swallowing saliva can cause cancer!
No matter where you live, life is dangerous. Either busy living, or rushing to die.
Next, the “Ministry of Health” will cut off the power at 8 o’clock every night so that you can “get a good night’s sleep.”
In other news: Marriage is the main cause of divorce.
…… 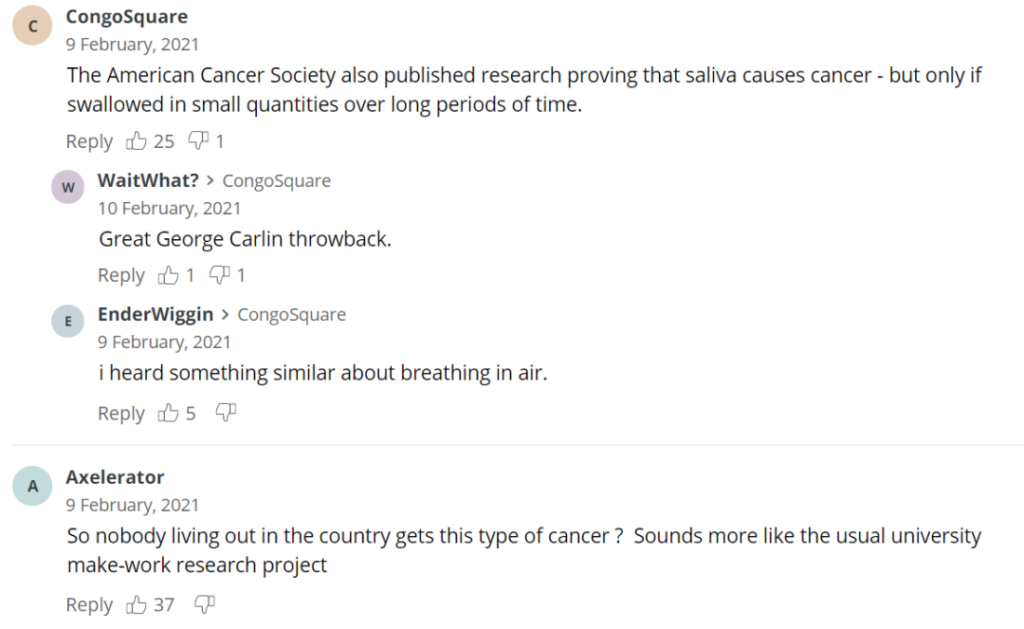 In response, the researcher responded, saying, “As an observational study, our research is not designed to determine causality. We don’t know whether higher levels of outdoor lighting at night will increase the risk of thyroid cancer. High. Hope our research can inspire scholars to further study the relationship between night light and cancer and other diseases.”

In fact, there has been research on the increase in cancer risk at night.

Spanish researchers have published a case of cancer research using the space station-artificial lighting at night can increase the risk of cancer!

The researchers collected the nighttime artificial lighting exposure of 1219 cases of breast cancer, 1385 cases of normal female control group, 623 cases of prostate cancer, and 879 cases of normal male control group in 11 regions of Spain, and adjusted for age, education level, and economic status. , BMI, smoking status, family history, morning and evening habits and other influencing factors. And the situation of receiving light is roughly divided into two kinds, one is the situation of exposure to outdoor artificial lighting at night, and the other is indoor lighting. Outdoor light exposure at night is divided into two types, one is mainly blue spectrum exposure (mainly LED light exposure), and the other is visible light spectrum exposure.

The researchers suggest that night lighting can be considered to use ordinary light bulbs or long-wavelength light for lighting, try not to use LED lights.

Regarding indoor lighting, studies have found that men who are accustomed to turning on the lights when sleeping have a 2.79 times higher risk of prostate cancer than men who sleep in total darkness. But whether women turn on the lights to sleep has no obvious effect on breast cancer.

So, for the sake of health, boys who are afraid of the dark should turn off the lights and go to sleep!

Sleeping with the light on will make a person fatter!

In addition to cancer, studies have shown that exposure to night lights can also make people fat!

A study published in JAMA Internal Medicine followed 43,722 women for a median of 5.7 years. The study found that people who turned on the light or the TV while sleeping were more likely to gain weight.

Compared with people who do not have a light source in the house while sleeping, these women have a 17% higher risk of gaining weight of more than 5 kg, and the risk of sudden overweight or obesity is increased by 22% and 33%.

The results found that as long as the artificial light source is exposed to sleep, the risk of weight gain will increase, and women with normal weight [body mass index (BMI) 18.5-25 kg/m2] have the greatest increase in risk. Compared with women who do not have a light source while sleeping, exposure to artificial light sources has a 17% higher risk of normal weight gain of more than 5kg, overweight women (BMI 25-30 kg/m2) have a 15% higher risk, and obese women (BMI>30 kg/m2) the risk is 6% higher.

Why does night light increase the risk of weight gain? The researcher said that perhaps it is because light can interrupt sleep, reduce sleep time and reduce sleep quality, and increase human desire to find high-energy food. At the same time, light will directly inhibit the production of human melatonin, destroy the biological clock and so on.