A glass of milk daily increases the risk of breast cancer by 50%?

A glass of milk daily increases the risk of breast cancer by 50%?  American experts recommend using soy milk instead of milk.

Breast cancer is the most common cancer among women. Globally, the incidence of breast cancer has been increasing since the late 1970s.

In 2020, breast cancer has replaced lung cancer and has become the world’s largest cancer.

The latest global cancer burden data released by the WHO International Agency for Research on Cancer (IARC) shows that there will be as many as 2.26 million new cases of breast cancer worldwide in 2020.

Although some countries is not a country with a high incidence of breast cancer, the situation is not optimistic.

The incidence of breast cancer in some countries is also increasing year by year, and the growth rate is 1 to 2 percentage points higher than that of countries with high incidence.

Breast cancer is largely related to genetics, but it is also affected by lifestyle habits such as diet.

In February 2020, researchers from Loma Linda University in the United States published a research paper titled Dairy, soy, and risk of breast cancer: those confounded milks in the International Journal of Epidemiology.

The study conducted a follow-up survey of 53,000 women for 8 years, and the results showed that even a relatively moderate amount of milk intake will increase the risk of breast cancer in women.

The reason for this increased risk may be the sex hormones contained in milk. However, there is no clear association between soy products and breast cancer.

Therefore, the researchers recommend using soy milk instead of milk.

The study evaluated the dietary intake of nearly 53,000 North American women (average age 57.1 years). None of these women had breast cancer at first. The researchers followed them for nearly 8 years.

As of the end of the study period, there were 1057 new breast cancer cases in the follow-up.

Researchers found no clear association between soy products and breast cancer. However, compared with lower or no dairy intake, higher intake of dairy products is associated with a higher risk of breast cancer.

In addition, when comparing the intake of whole milk and low-fat or skimmed milk, the results showed minimal difference. There is no obvious link between cheese and yogurt and breast cancer.

The first author of the paper, Dr. Gary E. Fraser, said: “This observational study provides strong evidence that both milk and other factors closely related to milk are the causes of breast cancer in women.” 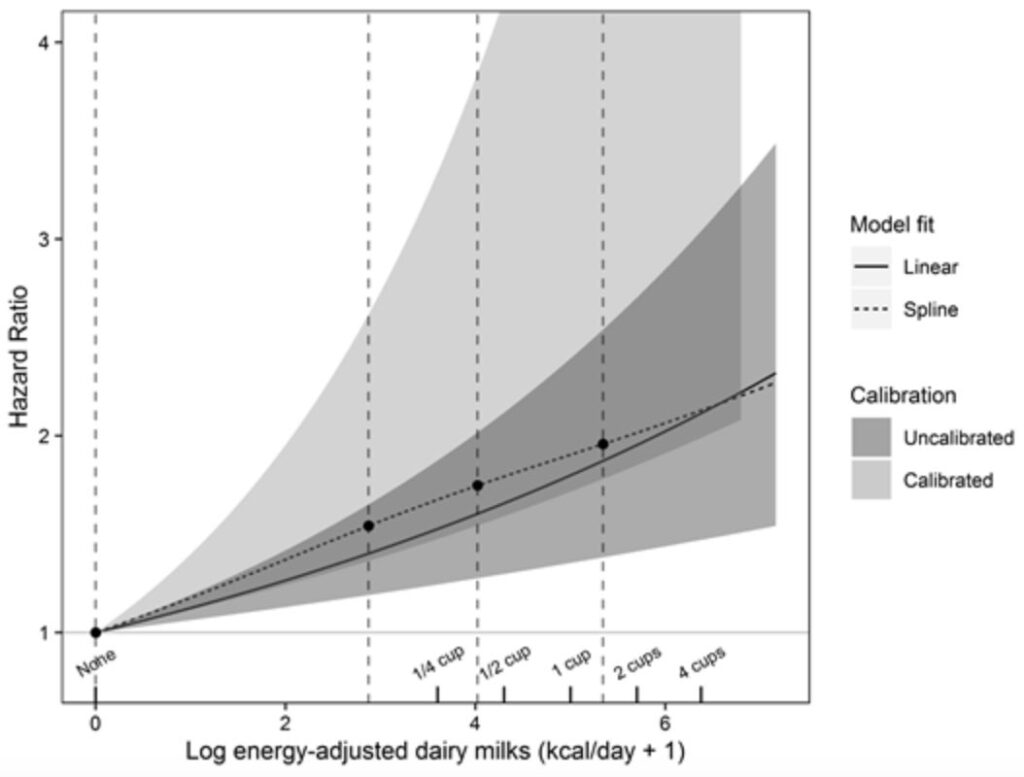 The current US dietary guidelines recommend drinking three glasses of milk a day. Evidence from this study suggests that people should be cautious about this recommendation, as replacing milk with soy milk will significantly reduce the risk.

The harmful effects of dairy products are consistent with the recent AHS-2 report, which showed that vegans (rather than lacto-egg vegetarians) have a lower risk of breast cancer than non-vegetarians.

Dr. Gary E. Fraser said that the reason for the association between breast cancer and milk may be the sex hormone content in milk, because about 75% of lactating cows are usually during pregnancy.  Female breast cancer is a hormone-responsive cancer.

In addition, in some reports, the intake of dairy products and other animal proteins is also associated with increased levels of insulin-like growth factor-1 (IGF-1) in the blood, which is thought to cause certain cancers.

A glass of milk daily increases the risk of breast cancer by 50%?