Every 10cm taller increase in height increases the risk of cancer?

Every 10cm taller increase in height increases the risk of cancer?  People who grow taller are more likely to get cancer?

Recently, a new book “Cancer Defense” wroten by Li Zhizhong, a doctor of cancer biology at Duke University in the United States, introduced the research on “height and cancer risk” in detail, confirming that “the taller the body, the more likely it is to get cancer”!

Height is a lifelong pain for many “small” people. Many people use various methods to hope that they will grow a few centimeters taller.

But do you know? Small people are not without advantages. Relatively tall people, “little people” are less likely to develop cancer.

Recently, a new book “Cancer Defense” by Li Zhizhong, a doctor of cancer biology at Duke University in the United States, introduced the research on “height and cancer risk” in detail, confirming that “the taller the body, the more likely it is to get cancer”!

Since the 1980s, there have been reports on the relationship between height and cancer risk. The results of almost all studies are the same: the higher the height, the greater the risk. This is true regardless of the country, regardless of race, regardless of men and women.

For example, a study that included 5.5 million people in Sweden and followed up for more than 50 years found that for every 10 cm increase in height for men and women, the risk of cancer increased by more than 10%. In 2011, “The Lancet Oncology” published the results of the famous British “Million Women Research Project”. Through an average of 10 years of tracking research on more than 1 million women in the UK, scientists have found that height and cancer risk are almost linear: on average, for every 10 cm increase in height of British women, the probability of cancer increases by 16% (see figure below) . 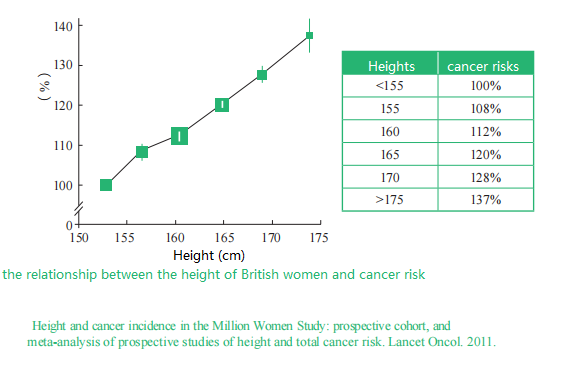 Not only women, but men’s height is also related to the risk of cancer. It’s just that the relationship between women’s height and cancer seems more obvious than that of men.

And this relationship does not only exist in Europeans, but also in East Asians: In 2019, a study of more than 20 million Koreans also yielded similar results: regardless of men and women, the higher the height, the higher the risk of cancer.

From the current research data, it is an objective fact that tall people have a higher risk of cancer, and shorter people have a lower risk. But why is there a relationship between height and cancer risk? The most mainstream is the “growth hormone” theory:

Many people who grow taller are due to the stronger secretion of growth hormone in the body, which stimulates cell division and growth. On the one hand, puberty develops faster and grows taller, but on the other hand, it also brings a greater risk of cancer.

How high is your lifetime risk of developing cancer? Approximately 20.6% who live to be 75 years old

For any individual, the risk of cancer is difficult to determine, because it is closely related to each person’s genetics, lifestyle, living environment and other aspects, and it will change dynamically. The overall cancer risk of our country’s population can be calculated.

In 2018, the World Health Organization announced the “accumulated cancer risk before the age of 75” in various countries. The data for some countries can be seen in the table below. 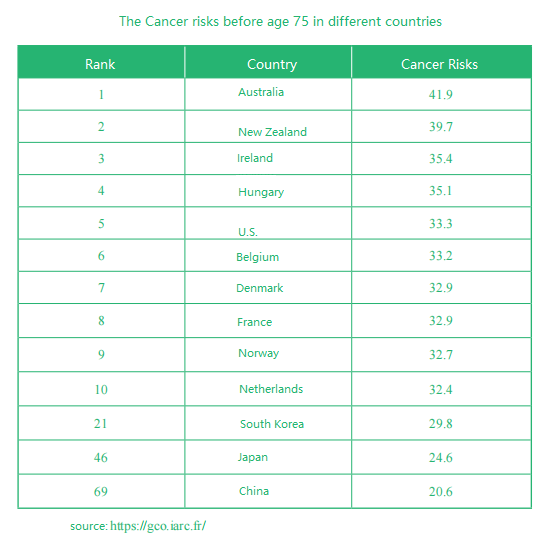 It can be seen again from the table that the countries that are really most likely to get cancer are basically developed countries in Europe and the United States.

The relationship between smoking and lung cancer is very clear. Ninety percent of lung cancers are related to smoking. Without cigarettes, lung cancer would be a rare cancer.

Regarding the impact of smoking and smoking cessation on the incidence of lung cancer, Europe has the most research, and several papers have similar conclusions. In 2004, the famous “British Journal of Cancer” published a classic paper that detailed statistics on the mortality of lung cancer among men from different groups in European countries such as the United Kingdom. How is the result? You can see it by looking at the picture below.

The conclusion is very clear:

1. People who don’t smoke, the probability of dying from lung cancer at the age of 75 is only 0.3%, while the average people who have been smoking: The probability is 16%, which is more than 50 times.

2. Heavy smokers who smoke more than 5 cigarettes a day have a 25% chance of dying from lung cancer at the age of 75.

To put it bluntly, betting on whether smoking will get lung cancer is like playing Russian roulette, with one or two bullets in six holes. It is true that many people will not be shot, but do you dare to pull the trigger?

In addition, no lung cancer does not mean that tobacco will not kill you. Data shows that a 35% probability of a smoker will die from various diseases caused by smoking before the age of 65. In other words, although the average life expectancy is now close to 80 years old, 1/3 of people who smoke in their lifetime will not live to be 65 years old.

On average, smoking will make people live 12 years less on average! Senior smokers have helped the society save a lot of medical insurance expenses. From this perspective, it can be regarded as a “live Leifeng”.

We often say that cancer is early detection, early treatment and early cure. There is no doubt that the earlier the cancer, the better the cure. But in fact, many cancer screening programs will indicate that they are targeted at high-risk groups, and there is a corresponding recommended age at which to start screening, not as soon as possible.

When you see this, you may ask why the screening for liver cancer, stomach cancer, lung cancer, etc. is only for high-risk groups, and not recommended for the general public? This is because the general public may be useless to do these physical examinations and increase their worries. To understand the logic behind whether to recommend a certain screening, we must first understand two concepts: false negatives and false positives.

False negative refers to illness but not detected, and false positive, in turn, is that there is no illness but an abnormality is detected. In medicine, no test is 100% accurate. All kinds of tests performed by hospitals, whether it is blood glucose test or new coronavirus test, have a certain false negative and false positive probability, but the probability is very low, usually far below 1. %.

Many anti-cancer physical examinations are ineffective for ordinary people and cannot be promoted, mainly because the false positive rate is too high. Everyone should have such a story around everyone: the physical examination was found to be “abnormal tumor markers” or “nodules found on chest radiographs”, and was frightened to death. It was not proved to be a false alarm until the money was spent on more examinations. .