From 1990 to 2017, the number of deaths, incidences and DALYs caused by pancreatic cancer more than doubled globally.

Although pancreatic cancer may not be well-known to many people, it is a common and highly malignant tumor of the digestive system. This kind of cancer has a dangerous onset, hidden symptoms, strong invasiveness, short course of disease, rapid progression, and high mortality. The median survival time is only about 6 months. About 3/4 of the patients die within 1 year after diagnosis, and 5 years. The survival rate is less than 5%. Therefore, it is also called the “king of cancer”. In recent years, many celebrities including former Vice Premier of the State Council Huang Ju, world-renowned tenor Pavarotti, and famous Hong Kong artist Shen Dianxia have died of pancreatic cancer, which makes people sigh.

Recently, researchers from the Institute of Health Measurement and Evaluation of the University of Washington in the United States used the data in the Global Burden of Disease (GBD) 2017 research report to examine the incidence, mortality and injury of pancreatic cancer in 195 countries and regions from 1990 to 2017. Disability adjusted life years (DALYs), and estimated the proportion of deaths caused by pancreatic cancer risk factors (smoking, high fasting blood glucose, and high body mass index). Related research results were published in “The Lancet Gastroenterology & Hepatology” (impact factor 12.856).

Pancreatic cancer is one of the cancers with the worst prognosis. The 5-year overall survival rate is only about 5%, and there is not much difference between high-, middle- and low-income countries. However, the incidence and mortality of pancreatic cancer vary greatly among countries in the world. In high-income countries, this cancer has the highest incidence and mortality, so it has the nickname “rich cancer”. Although medical staff have not yet fully clarified the pathogenesis of pancreatic cancer, they have identified some risk factors such as smoking, obesity and diabetes.

From 1990 to 2017, the age-standardized incidence and death rates of pancreatic cancer have been on the rise in the 21 regions counted by GBD, as shown in Figure 1. 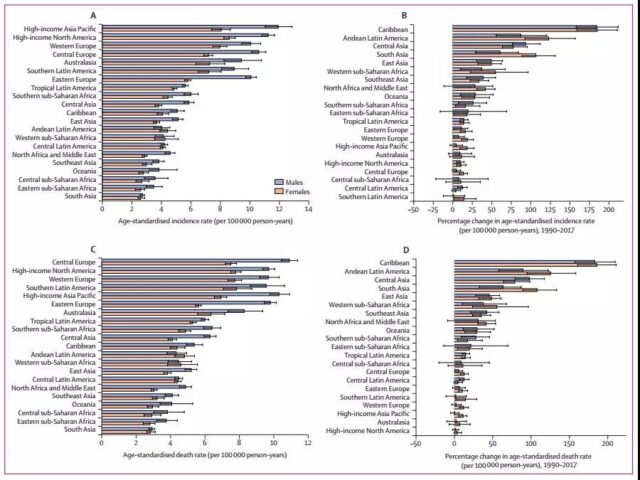 Figure 1: Trends in age-standardized incidence and mortality of pancreatic cancer in major regions of the world from 1990 to 2017

With age, the incidence and mortality of pancreatic cancer will increase; this trend is similar between men and women; as shown in Figure 2. Men between 65 and 69 years old, and women between 75 and 79 years old, the number of morbidities and deaths in these two age groups reached a peak. The age pattern of DALYs showed a similar trend with the total number of morbidities and deaths, but declined among people over 80 years of age. 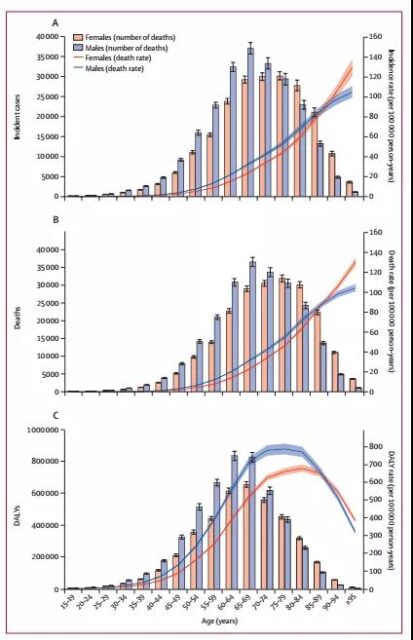 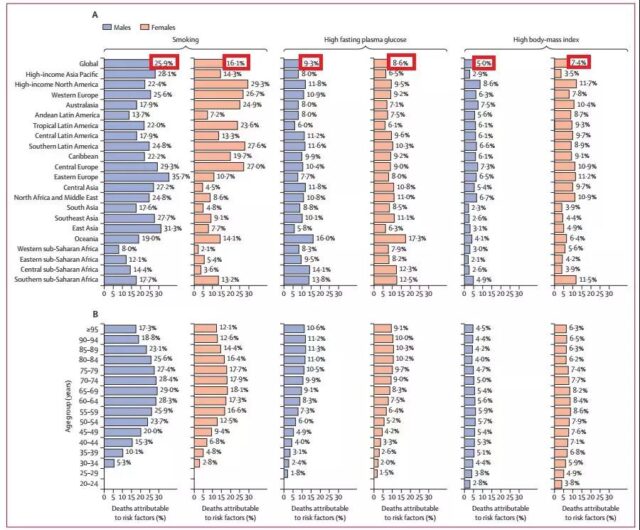 In terms of different regions, in 2017, the proportion of age-standardized deaths from pancreatic cancer attributed to smoking in men was highest in Eastern Europe (35.7%) and East Asia (31.3%), while women were in North America (29.3%) and southern Latin America (27.6). %)Highest. Correspondingly, men and women in the west of the Sahara Desert had the lowest standardized death rates from pancreatic cancer attributable to smoking, at 8.0% and 2.1%, respectively.

The age-standardized death rate attributable to high fasting blood glucose is the highest among men and women aged 85 to 89 years.

Although the proportion of age-standardized deaths attributed to high BMI is higher among men and women aged 45 to 79, the differences among age groups are not large.

Figure 4: Trends in age-standardized incidence and mortality of pancreatic cancer from 1990 to 2017 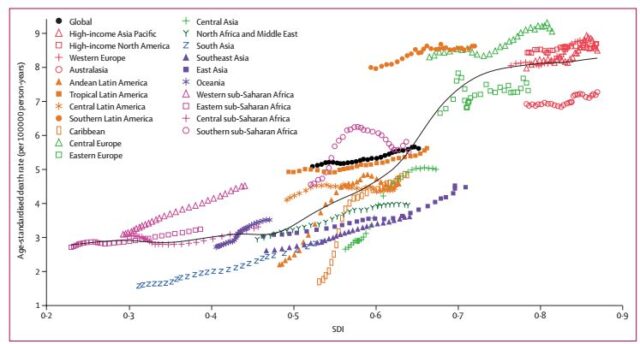 Figure 5: Relationship between age-standardized mortality of pancreatic cancer and SDI

Figure 6: The relationship between age-standardized mortality of pancreatic cancer and SDI in different countries and regions

From 1990 to 2017, the number of deaths, incidences and DALYs caused by pancreatic cancer more than doubled globally. With the increasing trend of population aging, the incidence of pancreatic cancer may continue to rise. Prevention work should focus on the prevention and control of changeable risk factors. Therefore, it is necessary to formulate early screening programs and develop more effective pancreatic cancer treatment strategies.

Dr. Andrew Hendifar, director of the Pancreatic Oncology Department of the Sidders-Sinai Medical Center in Los Angeles, analyzed that part of the reason for the low survival rate of pancreatic cancer is that it is difficult to identify pancreatic cancer early.

The pancreas is located deep in the abdomen and is a long, flat organ. Although the symptoms of pancreas problems are mild, experienced physicians can still identify some clues.

When you have the following symptoms in your daily life, you must beware of pancreatic cancer and get screened and tested as soon as possible.

If you notice lightening and floating of stool, this is a sign of poor nutrient absorption. In addition to breaking down fat, the pancreas also helps the body absorb fat-soluble vitamins. When pancreatic disease disrupts the organ’s ability to normally produce enzymes, it can cause stools to look gray and not so dense. You may also notice that the stool is a little greasy, and there is an oily film on the surface of the toilet flushing water. This is the fat in the diet that the body cannot break down.

Hormones secreted by the pancreas help the body control insulin production and blood sugar levels. When the pancreas is in danger, patients can easily get type 2 diabetes. If you are diagnosed with type 2 diabetes, you also need to have a careful examination of pancreatic function.

If you have nausea and vomiting after eating greasy foods (such as avocados, pizza, and nuts), you need to pay special attention. This is also because the enzymes produced by the pancreas help the digestive system to break down fat. Diseases that disrupt the function of the pancreas can also hinder the body’s ability to digest fat, leading to nausea.

If the weight loss is accompanied by the aforementioned abdominal radiation pain, then this weight loss may be caused by pancreatic cancer or other digestive system diseases.