BMJ: Research data of 440K people show that HPV vaccine is equally safe for Asians.  Source | Metz Medicine Cervical cancer is one of the most common cancers in women worldwide. In 2012 alone, there were 630,000 new cases of human papillomavirus (HPV)-related cancer, of which 530,000 (84%) were diagnosed as cervical cancer.

The current World Health Organization (WHO) recommendation for HPV immunization is to give priority to girls 9-14 years old who have not had sex. As of 2019, 124 countries have included HPV vaccination policies into their national immunization plans. Since June 2016, the Korean Agency for Disease Control and Prevention has also launched a two-dose plan for bivalent or quadrivalent HPV vaccine for adolescent girls aged 12-13. In the first year of implementation of the plan, the coverage rate of the first dose of HPV vaccine for school-age women was 61.5%, and by 2018, the coverage rate had increased to 87.2%.

Although the HPV vaccine is widely used worldwide, there have been concerns about the safety of HPV vaccination, and it has been confirmed that concerns about serious adverse events related to the vaccine have weakened public confidence in immunization.

In October 2020, Lei Jiayao and others from Karolinska Institutet in Sweden published a research paper titled “HPV Vaccination and the Risk of Invasive Cervical Cancer” in the New England Journal of Medicine (NEJM).

This national cohort study from South Korea evaluated the association between HPV vaccination and adverse events among 440,000 Korean adolescent girls, adding important evidence for the safety of HPV vaccines used in Asian populations.

Further secondary analysis using self-controlled risk intervals confirmed that there was no direct association between HPV vaccination and serious adverse events (including migraine) (adjusted HR=0.67, 95% confidence interval 0.58～0.78). At the same time, the results of different follow-up times (90 days, 180 days and 2 years) and different HPV vaccine subtypes are consistent and stable. 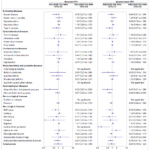 The researchers pointed out that hormone changes and menstruation are common risk factors for migraine, and considering the average age difference between the HPV vaccine group (12.42 years) and other vaccine groups (11.84 years), and the average age of menarche (12.7 years) in Korean girls Girls who are vaccinated against HPV are more likely to have menstrual-related migraines. The sensitivity analysis of the study also supports that the effect of age on migraine increases over time.

In summary, consistent with the results of previous studies in Europe and America, this study further confirms the safety of HPV in Asian populations.