On March 20, the Danish health department stated that two more people in the country had serious adverse reactions after being vaccinated with AstraZeneca. At present, one of them has died; the other has serious symptoms of thrombosis and cerebral hemorrhage and is receiving treatment in the hospital.

Just two days ago, the European Medicines Agency (EMA) reiterated in a statement on March 18 that the AstraZeneca vaccine was “safe and effective” and did not increase the overall risk of thrombosis.

According to Reuters and Associated Press reports on the 20th, the management agency of the Copenhagen Public Hospital in Denmark stated that the two persons who had serious adverse reactions were hospital staff and both received the AstraZeneca vaccine less than 14 days ago.

The Danish Medicines Agency confirmed that they had received two “serious (adverse reaction) reports” but did not provide further details.

On March 20th, Tanja Erichsen, Acting Director of the Drug Safety Department of the Danish Medicines Agency, tweeted: “We will give priority to these reports of suspected serious side effects and conduct thorough inspections to ensure that Assess whether it may be related to the vaccine. We are processing these two case reports.”

Reuters said that AstraZeneca declined to comment on the new case in Denmark and only reiterated a statement issued by the company on Thursday. The statement said: “We welcome the results of the EU regulator’s assessment that our vaccine has more advantages than disadvantages in preventing and controlling the epidemic.” 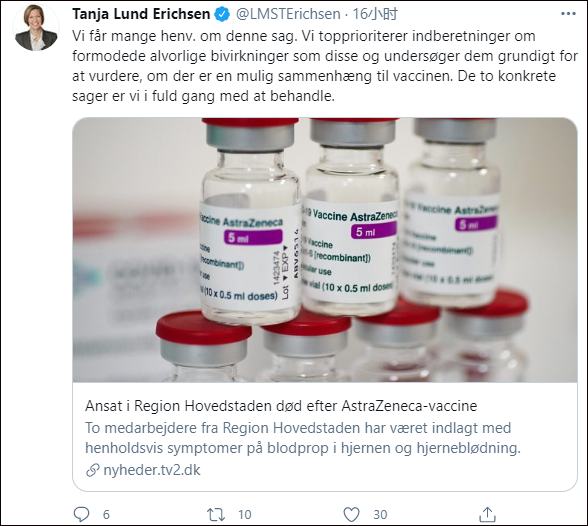 Two serious cases have been reported in Denmark, one of whom died (Tweet, Acting Director of the Drug Safety Department of the Danish Medicines Agency)

On March 11, Denmark announced that a woman had died after being vaccinated with AstraZeneca, with a blood clot in her body. To investigate whether there is a link between the vaccine and blood clots, Denmark became the first country to completely suspend AstraZeneca’s vaccination. Since then, 17 European countries including Germany, France and other European countries have announced that the AstraZeneca vaccine has been discontinued due to frequent deaths and thrombosis among vaccinators.

On March 18, the European Medicines Agency (EMA) held a press conference to announce the investigation report on the safety of AstraZeneca’s COVID-19 vaccine.

The agency said in a statement that the AstraZeneca vaccine was “safe and effective” and did not increase the overall risk of thrombosis. The benefits of vaccination outweigh the disadvantages. However, EMA Director Cook added that the results of the study failed to rule out the possibility of a link between the AstraZeneca vaccine and individual thrombotic events.

“Wall Street Journal”: European scientists confirm that there is a link between AstraZeneca vaccine and thrombosis report

After the announcement of this conclusion, although several European countries including Germany and France announced the resumption of AstraZeneca vaccination, the doubts did not disappear.

According to the “Wall Street Journal” on the 19th, scientists in Germany and Norway said that they have determined the potential connection between the AstraZeneca vaccine and thrombosis reports. The two research teams independently discovered that the vaccine can cause an autoimmune response, causing the formation of antibodies, which in turn interact with platelets and cause blood clots in the brain.