Questioning the conclusion of mRNA vaccine research. Even if the mRNA vaccine is flawed, as long as there are no serious safety issues, it should be put into use as soon as possible.

In the BMJ opinion, Dr. Peter Doshi’s article on mRNA vaccines can be said to be some questions about the conclusions of mRNA vaccine research. 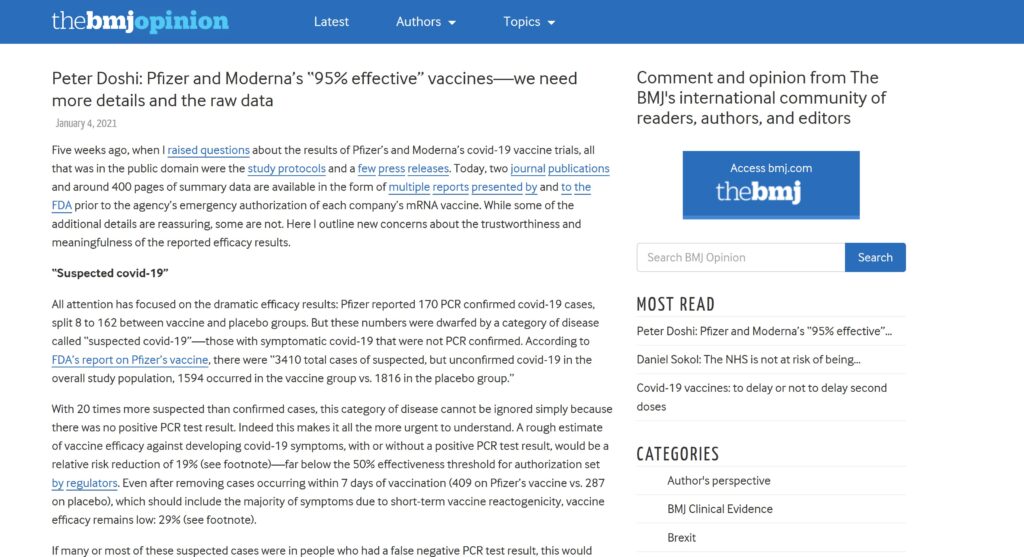 What needs to be said in advance is that this is just a question and opinion raised by a professional for professional discussion, and does not mean that there is any problem with the mRNA vaccine.

The main issues are briefly summarized, including:

If more than 3,410 suspected cases without PCR results (1594 in the vaccine group and 1816 in the control group) are included, it is roughly estimated that the efficacy is only 19%. Even if the cases within 7 days after vaccination are excluded, it is only 29%.

②The information of 371 cases excluded from the analysis:

Due to “significant deviations”, the analysis results excluded 371 cases of information, including 311 in the vaccine group and 60 in the control group. There is no explanation for this reason.

③The influence of antipyretic and analgesic:
The use of antipyretic and analgesic drugs after vaccination may conceal symptoms, and the impact of drug use on blinding and results has not received attention. In addition, the three members of the committee responsible for reviewing data in one of the companies are all company employees, not outsiders .

④ Protective effect on people who have been infected:

In the comment area at the bottom of this article, there are those who believe that the vaccine information is opaque and the effects of the vaccine are not recognized. There are also those who re-mentioned adverse reactions after vaccination, and there are hopes for other vaccines. It is also said that after their relatives have received the vaccine, PCR is positive, which is to question the effectiveness of the vaccine.

However, these doubts should be officially clarified by the research and development institutions, and there are many special cases in clinical research that really need to be eliminated. Therefore, although these doubts are reasonable, the final result requires more data.

Of course, I hope and be willing to believe that all existing vaccines are effective. Even if there are flaws, as long as there are no serious safety issues, they should be put into use as soon as possible.