According to overseas network citing media reports, the Israeli Ministry of Health stated on February 20 that the prevalence of new coronavirus pneumonia dropped by 95.8% among people who had received Pfizer’s COVID-19 vaccine twice.

According to a US media report on the 21st, the Israeli Ministry of Health announced on the 20th that Pfizer’s COVID-19 vaccine is 98% effective in preventing fever or dyspnea, and 98.9% in preventing hospitalization and death. Among those who received two injections, the prevalence of new coronavirus pneumonia dropped by 95.8%.

On February 19, local time, two Israeli studies found that the COVID-19 vaccine jointly developed by Pfizer and German biotechnology company greatly reduced the spread of the virus. Among them, research data from the Israeli Ministry of Health and Pfizer shows that the new coronavirus infection rate among the people after two doses of vaccines has dropped by 95.8%.
Research results show that Pfizer vaccine is effective against mutant viruses found in the UK. It is reported that the confirmed cases caused by this mutant virus account for about 80% of the confirmed cases of the new coronavirus in Israel.

Another study published by the Sheba Medical Center in Israel in the medical journal “The Lancet” showed that the first dose of Pfizer vaccine was 85% effective, which also triggered a discussion about whether a second dose of vaccine is needed.

This study reported for the first time that Israel’s infection rate of the new coronavirus SARS-CoV-2 decreased after the first inoculation of Pfizer/BioNTech vaccine BNT162b2. This is the first published research paper to test the efficacy of vaccines in a real-world population.

After statistical 95% CI correction, all infection rates within 1-14 days of the first vaccination decreased by 30%, and all infections within 15-28 days decreased by 75%. This is the first time the effectiveness of the vaccine has been evaluated in the general population. While vaccination can reduce symptomatic COVID-19 by 47% within 1-14 days of the first vaccination and 85% within 15-28 days. Therefore, vaccines are more effective in preventing symptomatic infections. 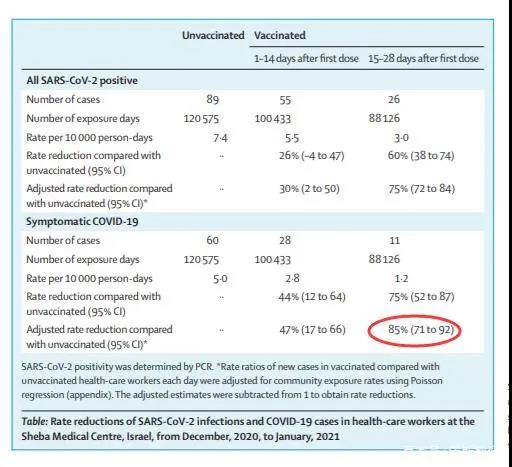 In view of vaccination, the second dose is usually given on the 21st or 22nd day (91%) after the first dose, so as time goes on, the preventive effect will be better.

This study fully affirmed the high effectiveness of mRNA (BNT162b2) vaccination in preventing symptomatic and asymptomatic SARS-CoV-2. Although the author also emphasized the value of the vaccine for the short-term period: a single dose of vaccination can effectively prevent the COVID-19 infection, but I don’t know why the author did not separately analyze the infection situation 15-21 days after the first dose. The 15-28 days covered part of the population who received the second dose (the second dose was vaccinated on 21 or 22 days).

Eran Kopel, an epidemiologist at Tel Aviv University, said the data from the Israeli Ministry of Health is encouraging, but further research and regular investigations are needed. The Sheba Medical Center’s research is very important, but it only focused on a hospital and a relatively small population range, so “it is impossible to draw a clear epidemiological conclusion from it.”

Although the research conclusions need more support, the above two studies are based on the world’s most advanced national databases and are one of the first studies that proposed that a vaccine may prevent the spread of the new coronavirus.

In fact, in early February of this year, an Israeli study has shown that after a large-scale vaccination of the COVID-19 vaccine, the Israeli epidemic has finally been effectively controlled, becoming the first overseas country to successfully contain the epidemic through a vaccine.

According to data from the Tel Aviv University research team in Israel, compared with the peak in mid-January, the daily rate of new infections among people over 60 in Israel has dropped by 46%, and the infection rate among young people under 60 has dropped by 18%.

Israel’s vaccination program has also become the largest field study of Pfizer vaccines, and its vaccination rate is among the highest in the world. According to the previous report by The Paper, Israel, with a total population of less than 9 million, has received 8 million doses of Pfizer vaccine. Because it needs two vaccinations, it can meet the vaccination needs of nearly half of Israel’s population. Israeli Prime Minister Netanyahu said on the 20th that it is expected that more than 95% of citizens over the age of 50 will be vaccinated in the next two weeks.

Israeli officials said that when Pfizer’s vaccine is exhausted, Moderna vaccine will be used. 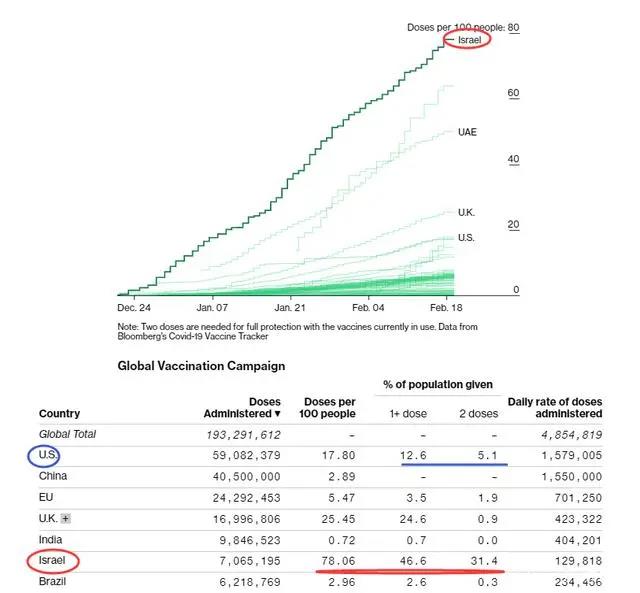 Due to the positive results in the previous reports of some medical and health institutions, Israel finally lifted the restrictions a few weeks after the lockdown. On February 21, some schools and shops were allowed to reopen.

The Israeli Ministry of Health also launched the “Green Pass” application, which is linked to personal medical records. People who have received two doses of vaccines or recovered from the new coronavirus infection more than a week ago and are presumed to be immune will be displayed on the application. Can stay in a hotel, participate in cultural activities or sports events.

03 China and the United States have the most vaccinations

Achieving herd immunity through vaccination is the key to liberating humans from the COVID-19 epidemic. According to Bloomberg’s latest data on February 19, 87 countries around the world have initiated vaccination, with a total of more than 193 million doses of vaccination, and the current daily vaccination has reached 6.47 million doses, of which China and the United States have received the most.

The United States has received more than 59.08 million doses, and 12.6% of the population has received at least one dose of the vaccine, 1.57 million doses per day. At present, the vaccination of medical staff and the elderly over 85, elderly doctors, police, teachers, homeless persons, prison inmates, etc. has been completed; in most areas, the inoculation of the elderly over 65 has been started.

According to reports, Carrie Lam, who was wearing a short-sleeved shirt and a copper-core mask, was vaccinated after 2:30 pm and received the needle card after completing the vaccination. The second official to be vaccinated was Hong Kong Chief Secretary for Administration Zhang Jianzong. He rolled up his clothes for the staff to be vaccinated; Hong Kong Secretary of Justice Zheng Ruohua wore a short-sleeved cheongsam. The officials who were then vaccinated were the Director of the Hong Kong Civil Service Bureau Nie Dequan, who was in charge of coordinating the vaccination work, and the Director of Hong Kong Food and Health Bureau Chen Zhaoshi.

Lam Cheng Yuet-ngor previously stated on her social account that the vaccination plan marks a new milestone in Hong Kong’s anti-epidemic work. She will be vaccinated with Kexing’s inactivated technology COVID-19 vaccine developed and produced in the Mainland. Carrie Lam also said, “After the SAR government relaxes social distancing measures, please do not relax your vigilance against the epidemic, and take personal protective measures.”

The first batch of 1 million doses of Kexing’s COVID-19 vaccine has arrived in Hong Kong by air from Beijing earlier, and the first batch of 1 million doses of Fosun/BioNTech vaccine is expected to arrive in Hong Kong by the end of this month. The Secretary of Hong Kong Food and Health, Chen Zhaoshi, said today (22) that Hong Kong citizens can be vaccinated with Kexing vaccination as soon as Friday (26), and about 1,500 private clinics will also provide vaccination services next month.

At present, all countries in the world are making every effort to accelerate vaccination, and Israel has the highest rate of vaccination. According to Bloomberg’s latest report on February 19, Israel’s vaccination has reached 78 doses per 100 people; 46.6% of the national population have received at least one dose of the vaccine, and 31.4% have received two doses of the vaccine. And thus become the best sample for observing herd immunity.
image

The real-world research results of Israeli vaccines have brought us enough comfort and tested the effectiveness of vaccines. It is hoped that mankind will be freed from the blockade of the plague and reopen as soon as possible.