Hypoxemia during one lung ventilation

Hypoxemia during one lung ventilation.  If there is an expectation of increased risk of hypoxemia, adjuvant treatment should be promptly upgraded

An article published online in the journal Anesthesiology also believes that pulmonary vascular dysplasia is also one of the causes of hypoxemia during one-lung ventilation.

Hypoxemia is still a common complication during one-lung ventilation.
We recently observed that a 30-year-old healthy woman had unexpected and refractory hypoxemia during one-lung ventilation. The woman underwent a left thoracotomy in the right decubitus position and underwent a compound descending aorta to the left subclavian /Carotid artery bypass surgery for upper limb and cerebral ischemia caused by aortic arteritis.

Although intratracheal sputum suction was performed, the position of the best bronchial blocker was re-determined, the ratio of inhaled oxygen was optimized, and the dependent lung positive end-expiratory pressure and the independent lung continuous positive airway pressure were used at the same time, PaO2 was still Keep it at ~50 mmHg.

We speculate that this hypoplasia leads to non-dependent, non-ventilated pulmonary shunt enhancement, which is a previously unreported potential cause of hypoxemia in one-lung ventilation.

Although pulmonary hypoplasia is estimated to occur only in the 1:200000 population, review of routinely obtained preoperative computed tomography should be considered to assess differences in pulmonary artery size as a rare potential risk factor for hypoxemia during one-lung ventilation. 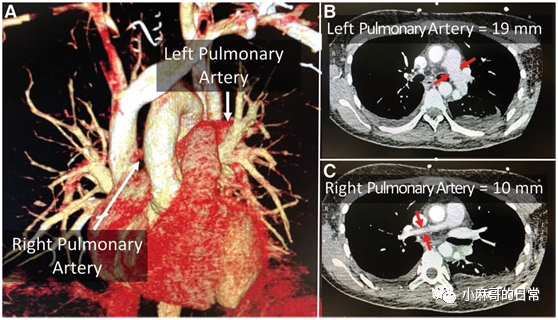 Hypoxemia remains a well-described occurrence during one-lung ventilation. 1 We recently observed unexpected refractoryhypoxemia during one-lung ventilation in a previously healthy nonsmoking30-yr-old female undergoing left thoracotomy in the right lateral decubitusposition to facilitate complex descending aorta to left subclavian/ carotidartery bypass grafting to treat upper limb and cerebral ischemia resulting from Takayasu’sarteritis. Despite endotracheal suctioning, reconfirmation of optimal bronchialblocker positioning, optimizing the fraction of inspired oxygen, and using both dependent lung positive end-expiratory pressure and nondependent lungcontinuous positive airway pressure,the Pao2 remained ~50 mmHg. No intracardiac shunt was seen on transesophagealechocardiography. Only intermittent two-lung ventilation temporarily corrected thehypoxemia. A postoperative computed tomography angiogram three-dimensionalreconstruction (panel A) was performed to evaluate the vascularreconstruction and showed a hypoplastic right pulmonary artery (10 mm diameter; panel B) compared to a normal left pulmonary artery (19 mm diameter; panel C). We speculate that this hypoplasia resulted in enhanced shunting to the nondependent, nonventilated lung; this is a previously unreported potential cause for one-lung ventilation hypoxemia. Although pulmonary hypoplasia is estimated to occur in only 1:200,000 of the population, consideration should be given to reviewing the routinely acquired preoperative computed hypo tomography scanto assess for pulmonary artery size differential as a rare potential risk factor forxemia during one-lung ventilation. If present, anticipation of anincreased risk for hypoxemia should prompt rapid escalation of adjuncttherapies (ie, positive end-expiratory pressure; continuous positive airway pressure; two-lung ventilation, with consideration to conversion of a thoracoscopictechnique to open thoracotomy) . Extracorporeal membrane oxygenation is also a potentialoption.

This article also mentioned the treatment methods for hypoxemia during one-lung ventilation, mainly:

1. Remove as much as possible the inducement or correct the factors that lead to hypoxemia, such as removing secretions in the trachea, adjusting the position of the catheter, etc.

3. Give proper end-expiratory pressure (PEEP), which can be adjusted from 5cmH2O according to the effect.

7. Other measures such as insufflation of pure oxygen into the lung on the ventilating side, membrane lung oxygenation, etc.