The incidence of atelectasis in children after general anesthesia is much higher than that in adults, which may be related to the smaller functional residual capacity, larger closed air volume, and better chest wall compliance. It is reported that the occurrence of atelectasis in children after general anesthesia The rate is approximately 68-100%. Intraoperative manipulation of lung recruitment and positive end-expiratory pressure can reduce the occurrence of atelectasis. However, atelectasis can still occur in the resuscitation room, especially when the patient has undergone a long operation, inhaled pure oxygen during the recovery period, or has residual muscle relaxants. Persistent atelectasis after surgery is closely related to postoperative pulmonary complications, such as hypoxia or pneumonia.

High-flow nasal catheters (HFNC) are widely used in the respiratory treatment of critically ill patients. In neonates, it has been proven that the device can provide positive pressure like transnasal CPAP. HFNC can provide relatively low PEEP, increase end-expiratory lung volume, reduce the occurrence of atelectasis in children with acute respiratory insufficiency, and reduce the work of breathing after children with heart disease. All these suggest that HFNC can reduce postoperative atelectasis, thereby reducing postoperative pulmonary complications. However, the application of HFNC in pediatric patients is still lacking.

Therefore, we hypothesize that immediate postoperative use of HFNC in children with high risk of atelectasis and pulmonary complications can reduce the occurrence of these events. We use lung ultrasound to examine the effects of HFNC after elective surgery in infants and young children on the incidence of postoperative atelectasis and pulmonary complications.

The patients were randomly divided into the control group and the HFNC group at 1:1. Their parents, the attending anesthesiologist, and the doctor doing lung ultrasound examinations did not know the grouping situation. The investigator who evaluated other results in the resuscitation room knew the patient’s Grouping.

At the end of the operation, perform the first lung ultrasound. This research uses Alpinion E-CUBE i7 ultrasound machine, 3-12MHz linear array probe. 3 longitudinal lines (parasternal, anterior axillary line, and posterior axillary line) on each side of the chest and 2 horizontal lines (1cm above the diaphragm and above the nipple) are 6 areas (Figure 1), and there are 12 lung areas on both sides The following signs are evaluated: lung sliding sign, A-line, B-line, and air bronchial sign. The lung consolidation is scored according to the degree: none=0, mild=1, small=2, large=3. Score the B-line according to the degree: 0=less than 3 B-lines, 1=multiple B-lines that are easy to identify, 2=multiple B-lines merged together, 3=white lung; two scores for each area Add up to get the total score for the area. If the ultrasound finds significant atelectasis, perform manual recruitment after ultrasound. Significant atelectasis is defined as the consolidation score of any area> 2 points. All lung ultrasound and recruitment are performed by the same anesthesiologist, who has more than 300 lung ultrasound examinations in children. 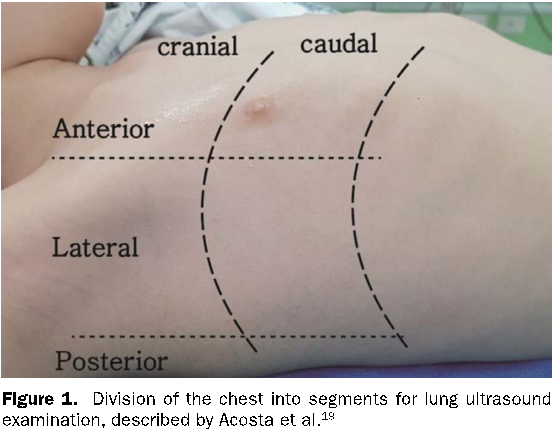 All patients inhaled pure oxygen before extubation. When the patient was fully awake and the TOF recovered to above 0.9, extubate the extubation, and give a positive pressure of 30cmH2O while extubating. After confirming good spontaneous breathing and oxygenation, the patient was admitted to the PACU. After entering the PACU, the patients in the control group used nasal catheters to inhale oxygen (1-2l/min), and the patients in the HFNC group received nasal HFNC (2l/kg/min). A humidifier was used to maintain the temperature of the inhaled oxygen at 37 degrees, and the inhaled oxygen concentration was 60% at first, and then gradually adjusted to maintain the preoperative level of SpO2.

When the patient arrives at the PACU and every 15 minutes thereafter, the RASS score sheet is used to score the sedation, and the NSS is used to score the patient’s care (0=the nurse is very satisfied with the patient’s condition, 10=the nurse finds the nursing work very difficult, for example, the patient cannot Control (do not cooperate, remove the nasal cannula or mask)), when the NSS is greater than 3 points, give 0.1mg/kg metholone. Children in the HFNC group were also given a pacifier to prevent them from opening their mouths. Before the patient returns to the ward, perform a second ultrasound examination. When the modified Aldrete score is greater than or equal to 9 points, the patient is returned to the ward.

The main outcome is the consolidation score and B-line score under ultrasound examination when the patient returns from the PACU to the ward. The secondary outcomes include the ultrasound score of the lung at the end of the operation, the incidence of significant atelectasis when returning from the PACU to the ward, RASS score, NSS score, The incidence of postoperative hypoxia (<95%), the incidence of postoperative respiratory events (including all respiratory events that require further treatment, such as cough with fever (body temperature> 38 degrees), pneumonia, hypoxia (SPO2 <90%) )), length of hospital stay.

Based on previous retrospective studies of HFNC in adults, the sample size was calculated. In this study, patients with traditional oxygen inhalation had a lung ultrasound score of 13 (SD=6), and patients in the HFNC group had a lung ultrasound score of 9 (SD=6). The method of comparing the overall mean of two samples to estimate the sample size requires 37 patients in each group, α=0.05, 1-β=0.8, and considering the loss to follow-up, 40 patients in each group are designed. 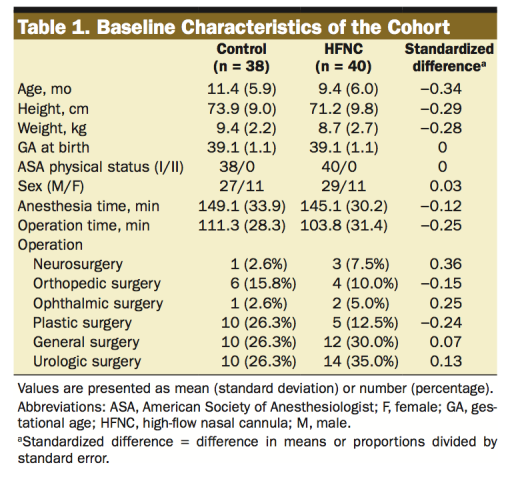 Infants and young children are very prone to atelectasis. In order to prevent atelectasis after general anesthesia, some measures (such as appropriate PEEP) are useful during the operation. But these effects can no longer be reflected after extubation. Our previous studies have found that 11.6-20.9% of children under lung ultrasound have atelectasis before leaving the PACU. Prolonged atelectasis can cause hypoxemia and is considered to be one of the causes of postoperative respiratory complications.

One of the ways to prevent postoperative atelectasis is to maintain continuous positive airway pressure (CPAP). CPAP can improve gas exchange, reduce atelectasis, and increase functional residual capacity. However, the use of transnasal catheter CPAP has some disadvantages, such as erosion of the nasal septum and difficulty in maintaining the machine in a good position to ensure airtightness, especially for newborns and small infants. HFNC can provide warm, humidified air and improve patient oxygenation. Therefore, we hope that HFNC can better prevent atelectasis and related complications than nasal catheter CPAP.

Previous studies have confirmed that HFNC can increase lung tidal volume and provide PEEP. When adult patients are closed, using 35L/min HFNC can generate 2.7cmH2O airway pressure in the nasopharyngeal cavity. Similarly, the use of 2l/kg/min in premature infants can produce an airway pressure of >2.62cmH2O in the nasopharyngeal cavity. Considering the significant correlation between positive airway pressure and end-expiratory lung volume, we believe that HFNC is of great significance in preventing atelectasis.

Studies have evaluated the use of HFNC to prevent atelectasis in adult patients after extubation. In Parke’s study, heart patients who used HFNC after extubation had no difference in atelectasis scores from traditional oxygen therapy patients. Corley’s similar findings on obese patients are the same. However, the limitation of these two studies is that atelectasis was diagnosed with chest radiographs, not chest CT or ultrasound. So far, one study used ultrasound to diagnose atelectasis when evaluating the effect of HFNC on atelectasis. In this study, the lung ultrasound score of the HFNC group was significantly better than that of the traditional oxygen therapy group.

There is very little literature evaluating the benefits of postoperative use of HFNC in children. Short-term (approximately 1 hour) use of HFNC after cardiac surgery in children can improve the synchronization of the chest and abdomen during breathing and the number of breaths, but it has no significant effect on oxygenation. The use of 30% oxygen concentration of 7l/min HFNC can significantly reduce the occurrence of atelectasis after extubation of neonatal surgery. In this study, children using HFNC in PACU did not have atelectasis when they exited PACU, while 15.8% of children in the control group had significant atelectasis.

Although the lowest SPO2 in the PACU of the control group was significantly lower than that of the HFNC group, we did not find a significant increase in the incidence of hypoxemia and no significant difference in hospital stay. This finding needs further explanation. Since this study excluded laparoscopic surgery, thoracic surgery, and cardiac surgery, and only included children with healthy lungs, our research subjects have excluded patients with high risk of postoperative atelectasis, and excluded patients who are more likely to be from HFNC For patients who benefit from treatment, further research should focus on the effects of HFNC treatment on these high-risk patients.

Before using HFNC in postoperative patients, clinicians should consider some variables. First of all, HFNC has some disadvantages. For example, it costs more than traditional oxygen therapy. The treatment requires training. If the airtightness is not good, it may not be able to establish positive airway pressure. In addition, infants and children using HFNC may have some potential risks: abdominal dilation, aspiration, and barotrauma may lead to potentially fatal pneumothorax, etc. have been reported.

Limitations of this study: 1. The degree of sedation of the two groups of patients in the PACU is not standardized. Compared with the HFNC group, the control group is more agitated and crying in the PACU, and these conditions may reduce the occurrence of atelectasis. Nevertheless, the lung ultrasound scores of patients in the HFNC group were better than those in the control group.

2. As mentioned earlier, this study only included relatively healthy patients. Patients in critical condition and patients with lung diseases were excluded. However, even in relatively healthy children undergoing surgery, this study still found that HFNC can be effectively prevented Atelectasis. 3. The submission reviewer noticed that the clinical registration content was different from the submission. In the initial clinical registration, there were no secondary results, and the final lung ultrasound scoring method was also improved compared to the clinical registration method.