Science: Nearly 500 million people live in areas where the coronavirus may overflow

Science: Nearly 500 million people live in areas where the coronavirus may overflow. The COVID-19 is just the tip of the iceberg, and there will be more SARS-like viruses!

Recently, a headline published in “Science” found that an average of 400,000 people may be infected with SARS-related coronaviruses each year. Researchers have drawn detailed maps of the habitats of 23 bat species known to carry SARS-related coronaviruses—— It was found that nearly 500 million people live in areas where spillover effects may occur.

In fact, there are many types of bats in nature, as well as other wild animal species. The viruses found now are actually just the tip of the iceberg, and virus spills may be more frequent than we thought.

If you want to avoid the next major outbreak of infectious diseases, you must study these unknown viruses carried by wild animals in nature, prevent them in advance, and reserve some drugs for testing, prevention or treatment.

In the past 20 years, two new types of coronaviruses broke out globally: the SARS coronavirus that caused severe acute respiratory syndrome (SARS) in 2003 and the SARS-CoV-2 that caused COVID-19 (which still exists today).

But a new research paper claims that this may be just the tip of the iceberg of undiscovered bat-related virus infections.

In a new study recently published on medRxiv, researchers estimate that an average of 400,000 people may be infected with the SARS-related coronavirus each year, and the spillover effect of this virus will never develop into a detectable epidemic. 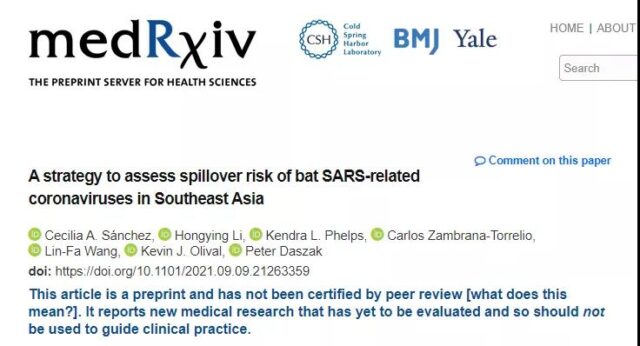 On September 15th, researchers published an article titled “SARS-like viruses may jump from animals to people hundreds of thousands of times a year” in “Science”, which caused heated discussion.

“This number has a lot of warning significance, and it will open the eyes of the entire scientific community, because we don’t know the frequency of the spread of zoonotic diseases,” the University of Saskatchewan Virology, who was not involved in the study Home Angela Rasmussen said, “This needs to be changed because otherwise we have seriously underestimated this.”

Researchers including Peter Daszak of the Ecological Health Alliance and Linfa Wang of the Duke National University School of Medicine in Singapore have drawn detailed maps of the habitats of 23 bat species known to carry SARS-related coronaviruses, SARS-CoV and SARS- CoV-2 falls into this category, and then it is superimposed with the data of places where humans live to draw a hotspot map of potential infections.

They found that nearly 500 million people live in areas where spillover effects may occur, including northern India, Nepal, Myanmar and most of Southeast Asia. Southern China, Vietnam, Cambodia, Java, and other Indonesian islands are at the highest risk (see figure below). 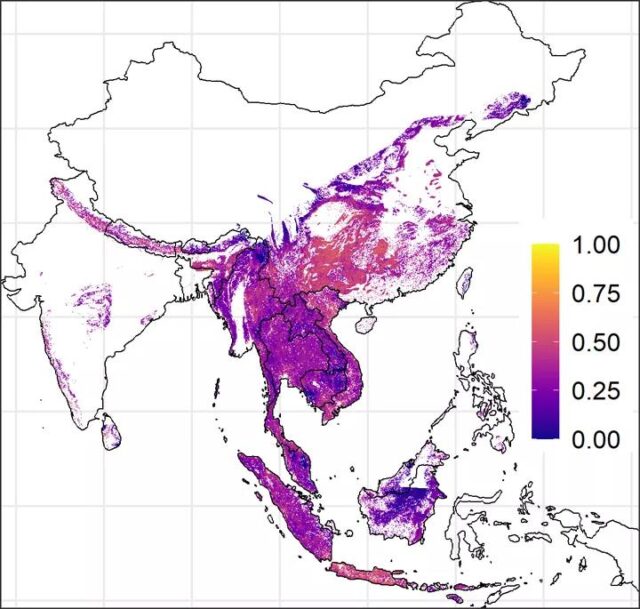 Daszak said: “This is an authoritative analysis of where the next SARS or coronavirus-like virus is most likely to appear on the planet.” These maps can change the behavior of high-risk communities and target surveillance to find new ones earlier. In order to reduce the possibility of the spread of the epidemic. Daszak is an active supporter of the hypothesis that the COVID-19 virus comes from the field rather than a research laboratory. These maps can also guide the search for the natural source of the virus. (Several studies are ongoing or planned to search for the new coronavirus and its relatives in horseshoe bats and other animals.)

But the researchers’ previous research has been one step closer. A small survey conducted before the outbreak of the new coronavirus revealed that some people in Southeast Asia have antibodies against the SARS-related coronavirus. Combining these data with the frequency of people’s exposure to bats and the length of time the antibodies stay in the blood, the researchers calculated that there are about 400,000 undetected human infections in the area each year.

Daszak said: “People’s interaction with bats is much more common than people think. Just living there means you are exposed to it: people hide in caves, they dig out bird droppings from caves, and they prey on bats. .”

He also pointed out that the paper did not even mention how many people are engaged in the wildlife trade. When the bat virus first infects another animal, how many people may be indirectly infected.

Rasmussen said: “Although 400,000 infections per year sounds like a lot, in an area where there may be hundreds of millions of bats and nearly 500 million people, it is not that many.” However, the annual confidence interval ranges from 1 to more than 3,500. Ten thousand cases of hidden infections, Rasmussen joked: “This is enough to fly the entire horseshoe bat population.”

Vincent Munster, a virologist at the National Institute of Allergy and Infectious Diseases in the United States who studies coronavirus, said: “The quality of the model depends on the data entered into the model.” He pointed out that the data on antibodies only included a few thousand people for testing. Antibody analysis methods can easily lead to false positives.

Rasmussen said that most recessive infections may be short-lived and will not cause further transmission because the virus is not highly adaptable to humans. They may not infect enough cells or the correct type of cells to spread the infected person to another person; or they may not be able to evade human immune defenses. When the virus does spread, sheer chance may restrict it to a small, isolated community.

Daszak said: “Many viruses may not be transmitted from one person to another, but I have no doubt that some diseases caused by these viruses will be misdiagnosed or never diagnosed. For example, it is almost impossible for farmers in Myanmar to be Go to the clinic with a little cough.”