Recently, the International Agency for Research on Cancer (IARC) of the World Health Organization released the latest global cancer burden data for 2020. 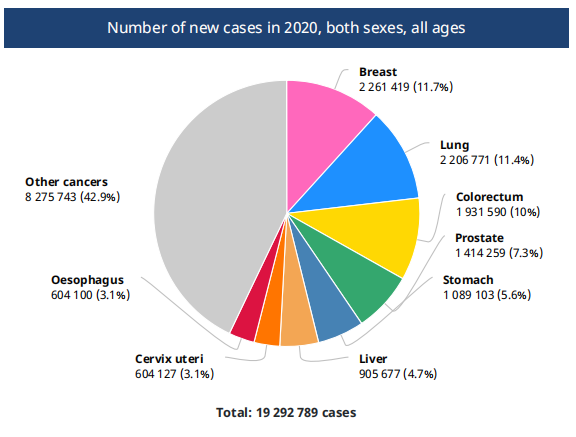 At present, the recognized biomarkers that influence the treatment decision of breast cancer patients are estrogen receptor (ER) expression, progesterone receptor (PR) expression and human epidermal growth factor receptor 2 (HER2) overexpression or amplification in tumors . It is recommended to determine ER, PR, and HER2 status for all newly diagnosed invasive breast cancers and any recurrence when feasible. These are usually used to predict the response to breast cancer treatment and guide treatment plans. 【2】 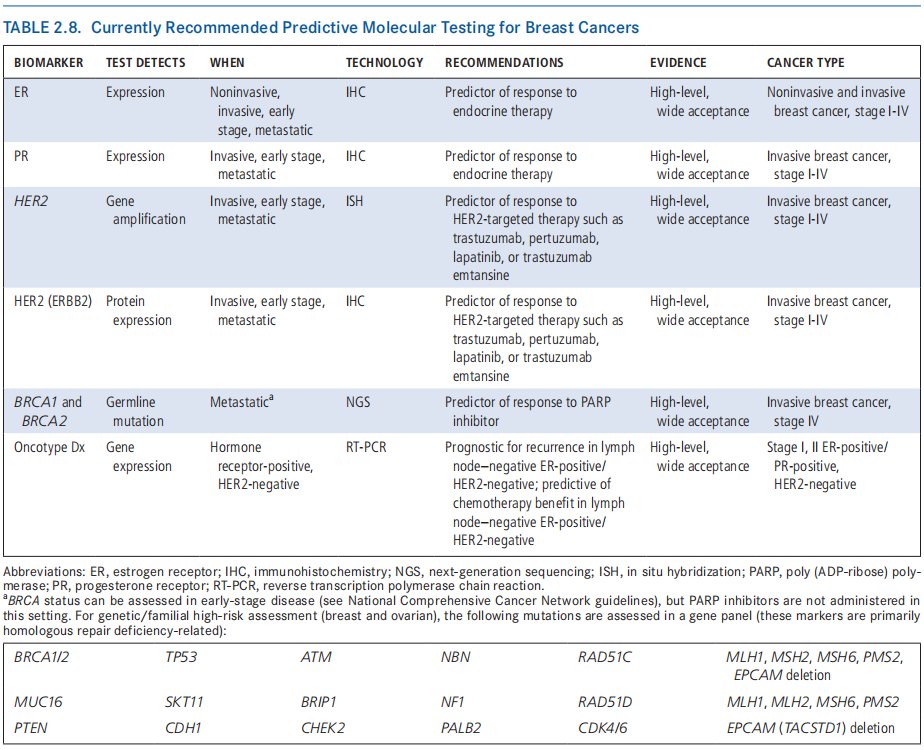 Molecular profiling of breast cancer has provided more powerful molecular prognostic characteristics and treatment options for breast cancer patients. However, the non-Caucasian population has not yet been fully studied. In a paper recently published in “Nature Communication”, scientists introduced the mutation, transcription and copy number profiles of 560 Malaysian breast tumors, and compared the breast cancer status of Asian and white women. Compared with white women’s breast tumors, Asian women showed an increased prevalence of HER2-rich molecular subtypes, and ER-positive Asian breast tumors had a higher prevalence of P53 somatic mutations. Scientists also observed elevated immune scores in Asian breast tumors, indicating a potential clinical response to immune checkpoint inhibitors. HER2 subtypes and abundant immune scores are associated with improved survival, while the presence of P53 somatic mutations is associated with poor survival of ER+ tumors. Overall, these demographic differences provide opportunities to improve understanding of this disease and lay the foundation for precision medicine in different populations. 【3】

Are there big differences in breast cancer gene mutations in different races?

Triple-negative breast cancer is more common in African-American women. A recent genome analysis of 194 tumors showed that the characteristics of HR deficiency increased, and P53 mutations and structural changes were greater, indicating that the biology is more aggressive. Breast cancer in Asians tends to occur at a young age. Before menopause, the proportion of estrogen receptor (ER) negative and human epidermal growth factor receptor 2 (HER2) receptor positive is higher. A recent genome analysis of 187 cases of early-onset breast cancer in Asia showed that the prevalence of P53 mutations is higher and the immune signals are abundant. In addition, an analysis of 465 types of triple-negative breast cancer in Chinese women showed that tumors of the same subtype have broad similarities in Asian and white women, despite the luminal androgen receptor (LAR) of Chinese patients relative to TNBC The proportion is much higher for white or African American patients.

Characteristics of gene mutation spectrum of breast cancer in Asia

As shown in the previous figure, the gene mutation spectrum of subtype female breast cancer, the top three mutation frequencies from high to bottom are P53 gene (42.9%), PIK3CA gene (27.8%), and GATA3 gene (9.7%).

In addition, although Asian breast cancer has a higher probability of ER-positive estrogen receptors. However, the mutation probability of tumor suppressor gene P53 is also high.

As shown in the figure below, compared with European and American breast cancer patients, Asian women with breast cancer are more likely to be positive for ER and HER2 receptors. Patients with ER-positive breast cancer using endocrine therapy can have a better prognosis and a longer survival period.

Effect of estrogen receptor and TP53 gene on overall survival

However, it should be noted that in ER-positive breast cancer patients, if genetic testing finds a P53 mutation, then this is a poor prognostic factor. Also using endocrine therapy, if the P53 gene has an inactive mutation, then the patient will survive The period is shorter. This part of breast cancer patients needs to pay attention to the corresponding follow-up, review, and timely treatment.

The effect of P53 mutation on breast cancer patients

According to more than 40 years of research, the P53 gene has shown its basic role as a key cell process regulator, involved in controlling cell proliferation and maintaining the integrity and stability of the genome. TP53 tumor suppressor protein is activated in response to various stress signals and inhibits cell transformation by triggering cell cycle arrest, DNA repair and apoptosis. In addition, P53 has been shown to play a role in metabolism, fertility, angiogenesis, immune response and stem cell maintenance.

The high mutation frequency found in many cancer types, including breast cancer, proves the importance of P53 in tumor progression. Point mutations are the most common somatic aberrations, followed by small insertions and deletions. The mutations are mostly missense, mainly located in exons 5-8, spanning the DNA binding domain of the protein. Mutations may result in the complete or partial loss of protein function, gaining dominant negative effects or gaining function (GOF). 【4】 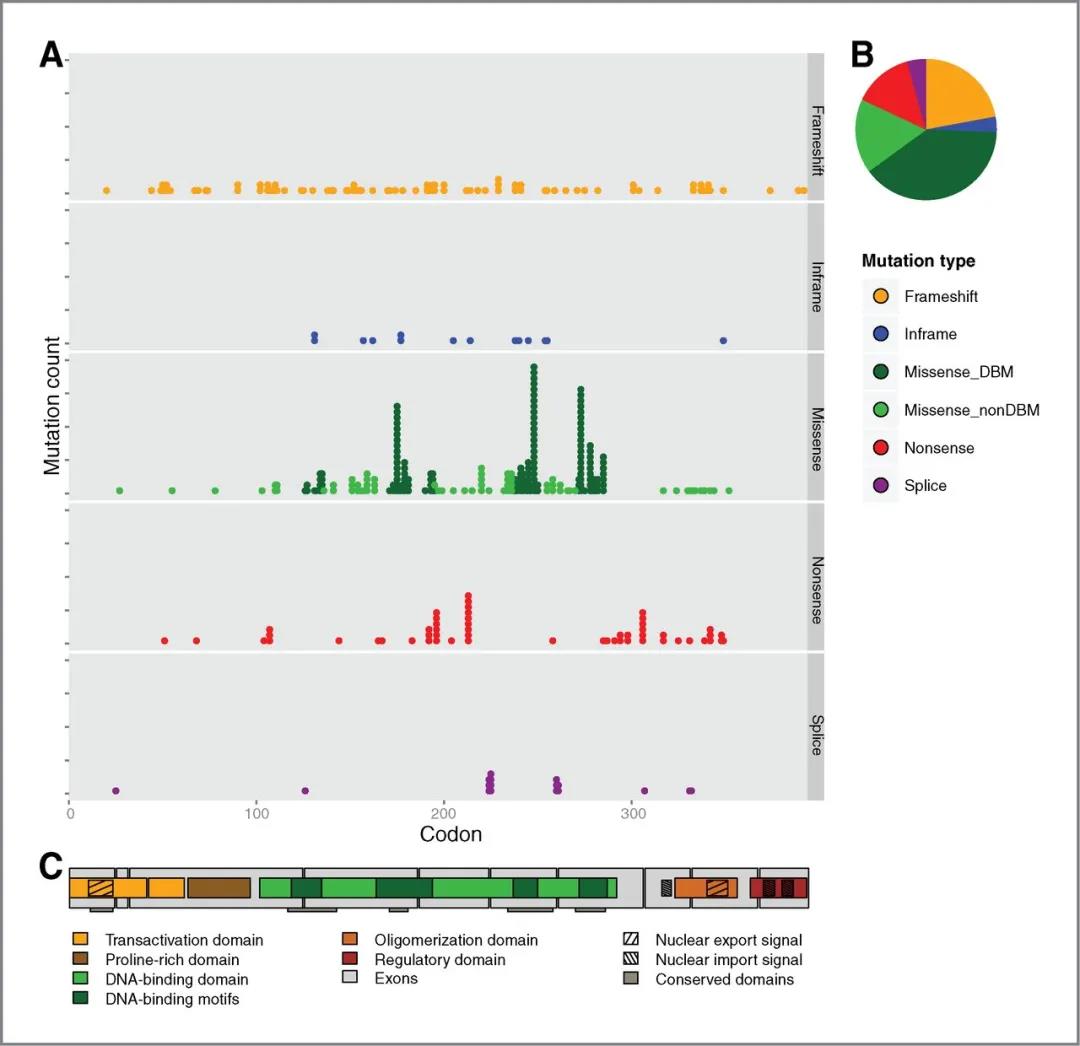 2. The mutation of P53 gene leads to more and more unstable tumor genome.

Is there any drug intervention for P53 mutation?

The China Food and Drug Administration (CFDA) approved “Jianyousheng Gendicine”-“Recombinant Human P53 Adenovirus Injection” as a new class of biological drugs in 2003, and was put into clinical use in the treatment of head and neck cancer in 2004. In the 12 years from 2004 to 2016, more than 30,000 patients, including nearly 10% of international patients from more than 50 countries, received Gendicine’s single treatment or combined radiotherapy, chemotherapy, hyperthermia, and other multiple Treatment combined with therapy. In general, in various clinical applications and clinical studies, the Jinshengsheng treatment has achieved a complete response rate of 30-40% (complete response CR), a partial response rate of 50-60% (partial response PR), and the total effective rate (CR + PR) reached 90-96%, which is consistent with the clinical data of Phase II and Phase III approved by CFDA. So far, the most common side effects in Gendicine treatment are fever, joint pain, and muscle pain after injection of the drug. Approximately 50-60% of patients develop fever (37.5-39.50C) 24 hours after the injection of Gendicine, which lasts only a few hours. 【5】