3-negative breast cancer: This innovative antibody conjugate has a disease control rate of 95%!

During the ESMO Breast Cancer Conference in 2021, AstraZeneca/Daiichi Sankyo developed a new drug DS-1062 (Datopotamab Deruxtecan, Dato-Dxd)-a DXd antibody drug conjugate directed by TROP2, in the field of breast cancer The latest research data is freshly released, and the data is eye-catching.

Among 21 evaluable triple-negative breast cancer patients, Dato-Dxd achieved an overall response rate of 43% and a disease control rate of 95%.

It is estimated that only 12.2% of patients with metastatic triple-negative breast cancer survive for five years, and the median overall survival is generally less than two years.

The disease control rate is as high as 95%, and the new ADC drug targeting the TROP2 target has lived up to expectations!

In this phase 1 study from TROPION-PanTumor01, the patients enrolled are all suffering from advanced or metastatic HR-/HER2- triple-negative breast cancer and have received at least one standard treatment for recurrence or progression.

As of January 8, 2021, of the 21 evaluable patients who received DS-1062 [6mg/kg (n=19) or 8mg/kg (n=2)] through the blind independent center evaluation, the initial total The response rate (ORR) was 43%. Five confirmed complete or partial remissions (CR/PR) were observed, and four were waiting to be confirmed, and the disease control rate was as high as 95%.

The safety of datopotamab deruxtecan seen in the TNBC cohort is consistent with the safety previously reported in the TROPION-PanTumor01 non-small cell lung cancer (NSCLC) cohort. No patients discontinued treatment due to adverse events (AEs).

Just after talking about DS-1062, I have to mention its predecessor, the famous broad-spectrum ace ADC drug targeting the four major cancer types-DS-8201! The DESTINY-Breast01 clinical trial aims to evaluate the safety and efficacy of DS-8201 in HER2-positive unresectable and/or metastatic breast cancer patients who have previously received trastuzumab-metansine conjugate treatment.

For 184 patients with HER2-positive breast cancer after receiving the recommended dose of 5.4 mg/kg, the objective response rate (ORR) was 60.9%, including 11 patients whose tumors disappeared completely, the disease control rate was 97.3%, and the clinical benefit rate was 76.1 %, the median duration of response (DoR) was 14.8 months, The median progression-free survival (PFS) was 16.4 months.

The trial has not yet reached the median overall survival (OS) of patients, and the 1-year survival rate of patients is estimated to be 86%.

Colorectal cancer is the third most common cancer in the world and the second most common fatal cancer. For patients with metastatic colorectal cancer who have progressed after first-line treatment, the follow-up treatment options are limited, the patient suffers from the disease, and the prognosis is extremely poor.

DESTINY-CRC01, announced at the ASCO meeting in 2020, is a phase II clinical trial for HER2-positive, unresectable and/or metastatic colorectal cancer patients who have previously received two or more standard treatments.

The DESTINY-Lung01 study released at the ASCO conference this year is aimed at HER2 mutant (HER2m) unresectable and/or metastatic non-squamous non-small cell lung cancer (NSCLC) that has often received one or more systemic treatments and has disease progression Most of the patients had received platinum-containing chemotherapy (90.5%) and anti-PD-1 or PD-L1 therapy (54.8%).

The results of the study showed that 61.9% of patients who received DS-8201 monotherapy (6.4mg/kg) achieved tumor remission, and the disease control rate (90.5%) and median progression-free survival (14.0 months) were significantly improved .

Recently, DS-8201 was approved by the US FDA as a breakthrough disease therapy for the treatment of HER2 mutant metastatic non-small cell lung cancer, further proving that HER2 mutation is the target of clinical treatment and has become a new hope for patients with HER2 mutant NSCLC.

04. 51% effective! DS-8201 has become a dark horse for the treatment of advanced gastric cancer

In the clinical study of DESTINY-Gastric01, the effectiveness of DS-8201 in patients with HER2-positive advanced gastric or gastroesophageal junction (GEJ) adenocarcinoma was evaluated.

Included 187 patients with HER2-positive gastric or gastroesophageal junction adenocarcinoma who had received at least two treatments. The objective response rate of DS-8201 patients was 51.3% (61/119), including 11 cases of complete remission (CR) and 50 Patients with partial remission (PR); disease control rate was 85.7%, median duration of remission was 11.3 months; median overall survival was 12.5 months; median progression-free survival was 5.6 months. Compared with chemotherapy, the risk of death was reduced by 41% (HR=0.59).

At the ASCO meeting, DS-8201 showed absolute strength in the treatment of gastric cancer, prostate cancer, colorectal cancer and other treatments, and it is expected to become the new standard therapy for patients with HER2-positive cancer. Currently, clinical trials for HER2-driven breast cancer, gastric cancer, colorectal cancer, lung cancer and other cancer types are underway.

However, what needs to be reminded here is that how to detect HER2 is the key to accurate cancer treatment!

Therefore, all cancer friends must choose the testing institution carefully. For example, patients who have been tested can contact Cancer Free Home (400-626-9916) for interpretation and evaluation of available treatment options.

Reduced the risk of death by 59%, the first ADC drug targeting TROP-2

On April 22, 2020, the US FDA has accelerated the approval of its antibody conjugate drug Trodelvy (sacituzumab govitecan-hziy) for the treatment of adult patients with metastatic triple negative breast cancer (mTNBC) who have previously received at least 2 therapies. The approval time is one and a half months ahead of the scheduled approval date on June 2!

The sacituzumab govitecan group was 5.6 months, and the standard treatment group was 1.7 months; 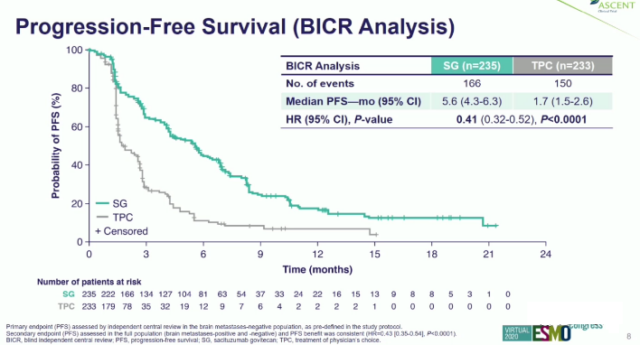