FDA postponed the application of K drug for early triple-negative breast cancer.  Immunotherapy also has shortcomings, such as slow onset time, not as precise as targeted therapy, relatively more adverse reactions, and so on.

Immunotherapy can be regarded as a milestone in the history of tumor treatment. It is different from targeting, radiotherapy, and chemotherapy in that it can rely on its own immune system to kill cancer cells and tumor tissues.

But some cancer cells are smart and can express PD-L1 on their surface, trying to escape the killing effect of immune cells T cells. Immunotherapy uses this feature to inject anti-PD1/anti-PD-L1 antibody to bind PD-L1 on the surface of tumor cells. It can be recognized by the body’s immune system T cells to achieve the effect of killing tumors. Therefore, this can also explain why immunotherapy is the “magic drug” of anti-tumor therapy that has emerged in recent years, because it can fundamentally mobilize the body’s immune system to kill tumor cells.

However, immunotherapy also has shortcomings, such as slow onset time, not as precise as targeted therapy, relatively more adverse reactions, and so on. Beginning at the beginning of this year, first drugs O and K drugs have been withdrawn for indications for small cell lung cancer, drugs I and T drugs have been withdrawn for urothelial cancer indications; from April 27th to 29th, the FDA will also hold oncology drug expert consultation Committee (ODAC) meeting to discuss whether the six indications for which three cancer immunotherapy PD-1/L1 drugs have been approved for accelerated approval have not confirmed clinical benefits will be withdrawn;

FDA postponed the application of K drug for early triple-negative breast cancer. Why? 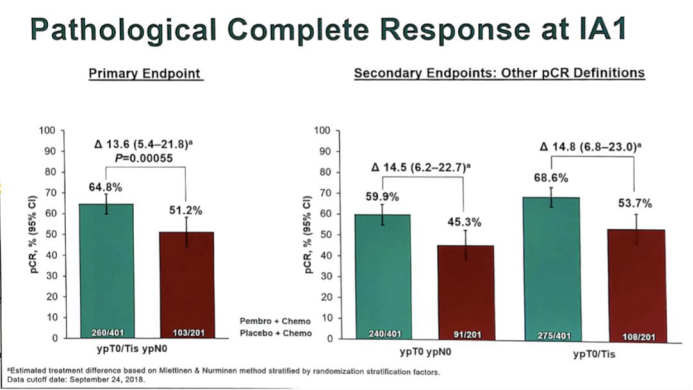 Before the effective date of the “Prescription Drug User Fees Act”, the regulatory agency’s Oncology Drug Advisory Committee voted 10 to 0 votes to postpone the decision until further results of the KEYNOTE-522 trial were obtained. It is expected that the next interim analysis of the trial will be conducted in the third quarter of 2021. It is worth noting that CRL will not affect any other indications of currently approved PD-1 inhibitors.

In KEYNOTE-522, researchers set out to study the safety and effectiveness of K drug + chemotherapy as a preoperative neoadjuvant treatment in TNBC patients.

The results of the interim analysis of the trial showed that in all subgroups analyzed (including those with PD-L1 expression), the pCR benefit observed in the K drug + chemotherapy group was generally consistent. The pCR rate of PD-L1 positive patients in the K drug group was 68.9% (n = 230/334), while that of the control group was 54.9% (n = 90/164). Among patients with PD-L1 negative tumors, the pCR rates were 45.3% and 30.3%, respectively. 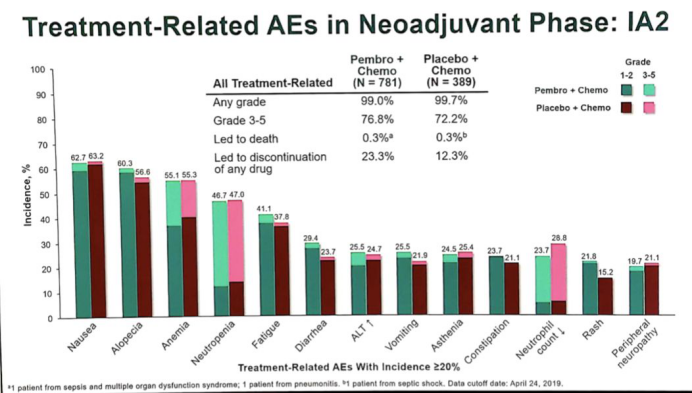 Taken together, neoadjuvant chemotherapy combined with K drug can significantly increase the pCR rate compared with chemotherapy. Continued use of K drug during adjuvant treatment after neoadjuvant therapy can increase the EFS rate compared with placebo, with controllable safety and no new adverse safety events. However, whether the increase in pCR rate caused by immunotherapy can ultimately be converted into PFS and OS benefits is still uncertain. Is the increase in pCR rate related to the degree of PD-L1 expression? Should all early-stage TNBC patients use this treatment plan? Immune-related adverse reactions also need to be further confirmed. Researchers may need to explore the combination of chemotherapy and immunotherapy. Therefore, CRL decided to postpone the approval of K drug for early triple-negative breast cancer.