Studies have found that intraoperative opioids have a protective effect on the recurrence of TNBC, which is contrary to previous views.

During the immunotherapy of triple-negative breast cancer (TNBC), the body’s immune response is closely related to the therapeutic effect, so the immunomodulation induced by opioids may affect the clinical outcome. In 2020, Giacomo Montagna and others published an article titled “Intraoperative opioids are associated with improved recurrence-free survival in triple-negative breast cancer” in the “British Journal of Anaesthesia”. Continuous analysis of primary TNBC patients in the early stage, using publicly available batch and single-cell RNA sequence data to analyze the expression patterns of opioid receptors in the TNBC tumor microenvironment (TME), and to evaluate the effects of intraoperative opioids and tumor prognosis relationship. The brief introduction is as follows:

Although opioids are generally considered to have a negative effect on tumors, there is still a lack of clear clinical evidence. Cell research found that morphine can induce angiogenesis and directly promote the proliferation of kidney cancer and liver cancer cell lines. However, this is not true for all solid tumors. The activation of the endogenous opioid pathway has been shown to inhibit the proliferation of different types of tumors, including pancreas, ovary, and triple negative breast cancer (TNBC), suggesting that opioids may have an inhibitory effect on certain tumors.

Surgery is the basic method of breast cancer treatment. However, surgery is related to neuroendocrine, metabolism and cytokine response, and affects the clinical outcome. In 2006, Exadaktylos and colleagues published the first retrospective study, comparing the relationship between paravertebral block and opioid analgesia in the prognosis of breast cancer patients, and found that the former is related to improving disease recurrence-free survival (RFS). However, these results have not been confirmed in recent multicenter randomized controlled trials.

Breast cancer is a heterogeneous disease. The degree of immune response that regulates tumor growth varies with molecular subtypes, and is highest in TNBC and human epidermal growth factor receptor 2 (HER2) positive tumors. The response and type of immune response may be related to the opioid-tumor interaction, because the immunosuppression induced by opioids may help tumor escape.

In this study, researchers tried to evaluate the relationship between intraoperative opioids and the prognosis of TNBC tumors. And using publicly available batch and single-cell RNA sequence data, the expression of related opioid receptors in TME was explored, and the receptor expression pattern was inferred.

The study selected patients with primary type I-III TNBC between March 2010 and December 2016, including tumors without estrogen receptor (ER) and progesterone receptor staining (<1%) or HER2 staining, and they were divided into 0 or 1+. In the case of unclear HER2 status (2+), perform fluorescence in situ hybridization. If the ratio of HER2 to probe is <2.0, it is negative. Excluded ER-positive contralateral breast cancer or other concurrent cancer patients, male patients, patients lacking adjuvant therapy, anesthesia or follow-up information, rare histological subtypes (metaplastic carcinoma, angiosarcoma, malignant phyllodes tumor, salivary adenoid tumors) And neuroendocrine cancer), occult primary breast cancer patients, and patients without axillary staging (Table 1). Extract local and systemic treatment data from the medical record, as well as the disease status at the last follow-up (no evidence of disease, disease alive, death of disease, death of unknown cause). Extract opioid details (fentanyl, hydromorphone, and morphine) from anesthesia records and convert them into oral morphine milligram equivalents (MME). 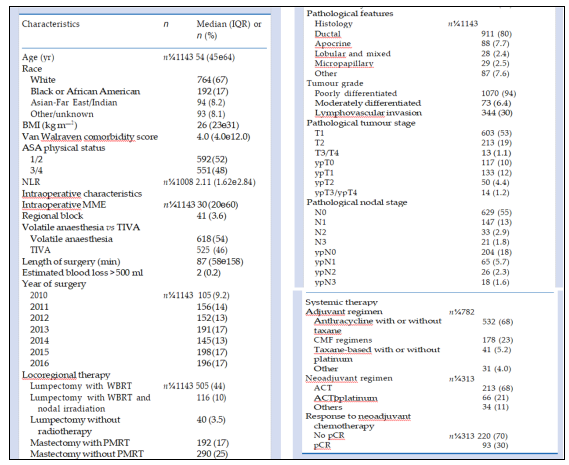 The purpose of this study was to quantify the relationship between intraoperative opioid dose and tumor prognosis. The main outcome of the study was RFS. The secondary endpoint is overall survival (OS). To assess the association between intraoperative opioids and tumor prognosis, the study used univariate and multivariate Cox proportional hazard regression to calculate hazard ratios (HRs) and 95% confidence intervals (CIs), and intraoperative MME was used as a continuous variable.

To assess whether the use of opioids has changed over time, the researchers constructed a linear regression model that regressed the logarithmically transformed MME according to the year of surgery. All analyses are two-sided analyses, using R3.5.3 (R Statistical Computing Foundation) to analyze and calculate the clinical endpoints.

In order to study the expression of opioid receptors in TNBC, researchers used a large amount of RNA sequence data from the Tumor Genome Atlas (TCGA) and shared public databases through the National Institute of Health/National Cancer Institute genome data. RNA sequence data of tumor samples were extracted from 173 TNBC patients, and another set of 113 RNA sequence samples were compared with normal breast tissue.

In order to evaluate the cellular level expression of opioid receptors in specific cell types of TME, Karaayvaz and colleagues created a single-cell RNA sequence data set and analyzed 1112 aggregated cells from primary TNBC tumors, and extracted specific interest from them. Gene expression data focuses on genes that are known to be associated with opioid receptors.

These include three typical opioid receptors (ORPM1, OPRK1 and OPRD1), endogenous opioid receptor OGFR and Toll-like receptor 4 (TLR4). Differential gene expression (whether it is volume data between tumor and normal tissue, or single cell data between various cell types) is calculated as the ratio of the normalized counting method for each cluster, shown as log2 conversion, P value Modified to multiple tests (for all genes in the respective data set) (Benjamini-Hochberg procedure, false discovery rate).

If the P value is <0.05, then all corrected P values ​​are considered significant. All statistical analysis is performed using the SciPy and Statsmodel packages in Python. 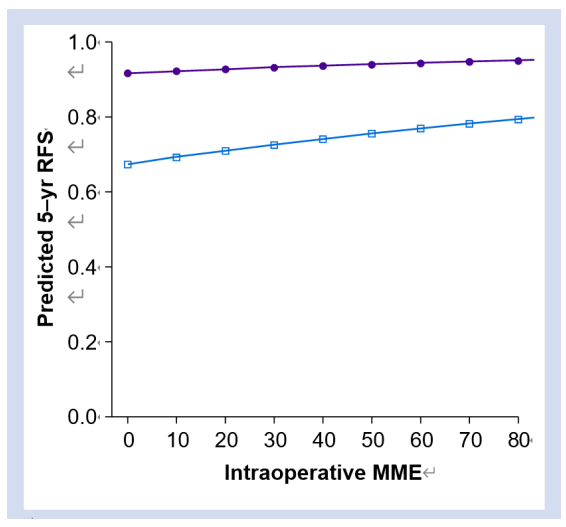 The analysis of the RNA sequence expression data of the TCGA-derived TNBC cohort showed that both typical opioid receptors and atypical opioid receptor-related genes are expressed, although the typical opioid receptor (OPRM1) is almost nonexistent (the normal mean value of DESeq2 is 0.23, Significantly lower than other opioid receptors). Compared with normal breast tissue, the differential expression of the remaining receptors can be calculated. Compared with normal tissue, OGFR, OPRK1 and OPRD1 in tumor tissue are up-regulated, while TLR4 is down-regulated (Table 3). Consistent with this finding, single-cell RNA sequences showed that OPRM1 was not expressed at a detectable level in any cell type. OPRD1 is the same, but OPRK1 is not the case, it is mainly qualitatively expressed on tumor cells. 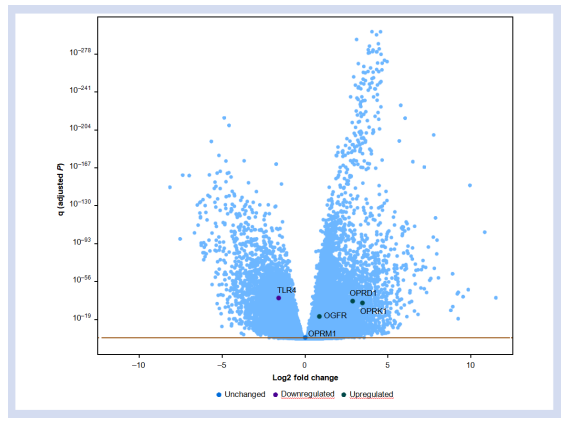 A retrospective analysis found that the use of intraoperative opioids was associated with the protection of RFS. For every 10 MMEs added to the management of opioids, the risk of recurrence was reduced by 7%. There have been many studies to observe the effect of regional anesthesia on breast cancer recurrence, and the results of the study are controversial. In addition, these studies have not directly explored the dosage of opioids during surgery.

A recent study in lung cancer cells found that the relative expression of multiple opioid receptors can better predict the impact of opioid use on clinical outcomes. Especially when morphine is used, the balance of OGFR (anti-tumor) and OPRM1 (original tumor) signals determines the progression of the tumor in these cells. This study not only considered OGFR and OPRM1, but also other receptors that are known to bind to opioids and are independently associated with survival outcomes.

Studies have shown that OGFR has a protective effect in TNBC, and the activation of TLR4 is related to the poor prognosis of TNBC. OPRK1 has a tumor suppressor effect in various types of tumors. The role of 5ORPD1 is not clear, and it has a special anti-tumor correlation in TNBC, but it is also related to the primary tumor of breast cancer. Various evidences link the expression of OPRM1 to precancerous outcomes.

This study found that the differential expression of these receptor genes is consistent with the net protective effect of opioid agonists: the original tumor receptor either does not express OPRM1 or down-regulates TLR4, while the anti-tumor receptors OGFR, OPRK1, and OPRD1 are up-regulated.

OGFR cell type specificity shows that its protective effect on TNBC is not only through its direct effect on tumor cells, but also through its effect on tumor infiltrating lymphocytes (TIL). In fact, the expression of OGFR on TIL (T cells, B cells, and macrophages) in TME is significantly higher than that of tumor cells. In view of the special importance of TIL in promoting the survival of TNBC, opioids may play an anti-tumor effect in TNBC by enhancing the effect of TIL. TNBC is an aggressive subtype of breast cancer. It is characterized by early recurrence and short survival after recurrence. Currently, there are limited treatment options available. The findings of this study support previous findings that the protective effect of OGFR observed in breast cancer subtypes may be due to both the direct effect on tumor cell suppression or the indirect effect of TIL activity. TIL is a known prognostic factor in the early stage of TNBC, and they can predict the response of immune checkpoint inhibitors. Given that immunotherapy may become part of the early standard treatment of TNBC in the near future, opioid-induced immunomodulation and its potential impact on immunotherapy response deserve further study.

Triple-negative breast cancer refers to breast cancer whose immunohistochemical examination results of cancer tissue are negative for estrogen receptor (ER), progesterone receptor (PR) and proto-oncogene Her-2, accounting for all breast cancer pathological types 10.0%～20.8%, the prognosis is worse than other types. This retrospective study analyzed 1143 cases of TNBC. In a multivariate analysis, a higher intraoperative opioid dose was associated with favorable disease-free survival. Analysis of a large number of RNA sequences of opioid receptors showed that OPRM1 was almost not expressed. Compared with normal breast tissue OGFR, OPRK1 and OPRD1 were up-regulated, and TLR4 was down-regulated. At the single-cell level, OPRM1 and OPRD1 are not detectable; OPRK1 is mainly expressed on tumor cells, while OGFR and TLR4 are more highly expressed on immune cells.

This is a study that directly evaluated the relationship between opioids during TNBC surgery and the results of RFS and OS. Its advantages include large sample size and detailed information on intraoperative opioid dosage and clinicopathological characteristics; limitations include its retrospective study, lack of detailed data on postoperative opioid consumption, and gene expression data from different cohorts .

Therefore, we can only explore the trends and patterns of opioid receptor expression in TNBC, and infer the possible effects in the cohort. In addition, the proposed model is consistent with the protective effects of opioids seen in the cohort, but it is possible that other molecular pathways are involved in mediating this effect. This study also did not distinguish between specific opioid types, but all converted to MME. Although this is consistent with general clinical research to deal with the heterogeneity of opioid use in a clinical setting, different opioids may have different effects on clinical outcomes.

Studies have found that intraoperative opioids have a protective effect on the recurrence of TNBC, which is contrary to previous views. Although it is generally believed that opioids induce immunosuppression and thus have a negative impact on the outcome of tumor surgery, the results of this study indicate that this may not be the case in some tumor types such as TNBC. Analysis of opioid receptor expression using single-cell RNA data appears to support the observed protective effects of opioids.

Since this study is a retrospective study, its causality still needs to be further verified in prospective studies. Obtaining RNA sequences in the actual clinical cohort will enable direct quantitative comparison of the expression levels of related opioid receptors, opioid doses and results at the individual patient level to better quantify the recommendations of the TCGA and single-cell RNA cohort data Associated. In the era of personalized medicine, it is necessary to further determine the differential effects of anesthesia interventions of different breast cancer gene subtypes on outcomes.