It is expected that more and more targeted drugs for rare targets will be approved to make cancer truly a chronic disease.
Recently, the US FDA granted Zenocutuzumab (MCLA-128) fast track designation as a potential treatment option for patients with metastatic solid tumors with NRG1 gene fusion.

Among the many mutation targets, NRG1 (Neuroregulin 1) fusion is a relatively rare oncogene and has been found in a variety of solid tumors.

However, the current research shows that the incidence of this target is not high, about 3% of non-small cell lung cancer (NSCLC) patients, 1.5% of pancreatic cancer patients, and less than 1% of other solid tumors. . Although the incidence of NRG1 fusion is low, it is a promising new target.

NRG1 is a member of the EGF ligand family and transduce its signal through HER/ErbB family receptor tyrosine kinases. The NRG1 gene is essential for the normal development of the heart and nervous system. In the human body, it is often fused with another transmembrane protein gene (such as CD74) commonly found on cancer cells on the surface of cancer cells.

NRG1 fusion will cause the continuous activation of the HER2 and HER4 signaling pathways and uncontrolled cell proliferation, which in turn leads to the occurrence and development of cancer.

Zenocutuzumab is a bispecific antibody that binds to both HER2 and HER3 receptors. 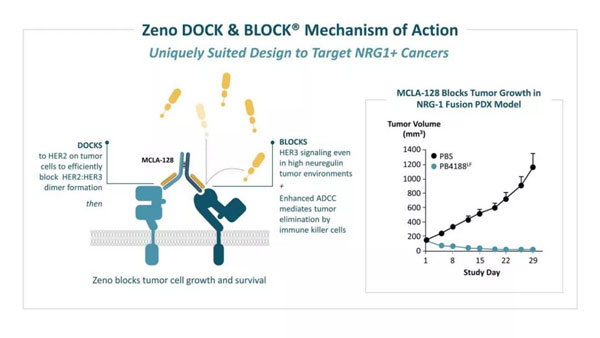 The activation of the neuregulin signaling pathway requires the combination of HER3 and HER2 to form a heterodimer, and the drug binds to HER2 to prevent it from forming a heterodimer with HER3, thereby blocking the signaling of neuregulin.

In July 2020, the FDA also granted Zenocutuzumab “orphan drug” designation for the treatment of pancreatic cancer.

3. The clinical trial is amazing, and the tumor is significantly reduced!

This identification is based on the results of a global open, multi-center, multinational, dose-escalation, phase 1/2 eNRGy clinical trial. It aims to study the safety, tolerability and pharmacokinetics of Zenocutuzumab in NRG1 fusion-positive patients.

The results found that: after Zenocutuzumab treatment, the patient’s tumor was significantly reduced, and a long-lasting tumor response was produced.

In addition, trials of the drug in patients with lung cancer, pancreatic cancer and other NRG1 fusion-positive solid tumors are ongoing, and the primary endpoint is the objective response rate. Moreover, the trial included some North American, European and Asian patients, and the results are expected to be announced in the second quarter of 2021.

Previously, Zenocutuzumab had also achieved amazing results in the treatment of pancreatic cancer patients, which significantly reduced the tumors of two patients.

In another NSCLC patient whose condition was still progressing after receiving 6 treatments, the tumor diameter decreased by 41% after 5 months of treatment with Zenocutuzumab, and the brain metastases were also improved.

The discovery of the new target of NRG1 gene fusion has made patients with pancreatic cancer, non-small cell lung cancer and other solid tumors who are still progressing after multiple treatments see new hope for cure.

It is expected that more and more targeted drugs for rare targets will be approved, making cancer just a chronic disease.