How gut health affects disease risks? Why are chronic diseases related to intestinal health? With the improvement of living conditions, people’s life expectancy has begun to grow, and research on health and longevity has gradually begun to increase.

However, longer life span is not necessarily healthy. More and more people are suffering from various chronic diseases.

How do chronic diseases come from?

Start with inflammation first. Inflammation is actually a process of self-healing when the body is fighting against harmful substances (such as infections and toxins). When cells are about to be destroyed, the body releases chemicals, which triggers a response from the immune system.

So why are chronic diseases related to intestinal health?

01 Many diseases start in the intestine

Friends who have read our article have probably begun to have this concept: Many diseases start in the intestine.

Because a large part of the immune system is in the intestine, specifically speaking, this involves the problem of intestinal permeability.

Dr. Fasano, director of the Abdominal Cavity Research and Treatment Center at the Children’s Hospital of Massachusetts General Hospital, and his team discovered the zonulin protein (zonulin), which opened the door to a new method of studying intestinal permeability, not only because it affects the intestinal tract , But also affects inflammation and autoimmunity in the whole process.

In addition to genetic makeup and exposure to environmental triggers, there are three additional factors that cause chronic inflammatory diseases:

Inappropriate increase in intestinal permeability (may be affected by the composition of intestinal flora);

The “super belligerent” immune system responsible for the balance of tolerance immune responses;

The composition of the intestinal flora and its epigenetic effect on the immune system affect the expression of the host genome.

In the past decade, people have begun to pay more and more attention to human genetics, intestinal microbiome and proteomics, indicating that the loss of mucosal barrier function, especially the loss of gastrointestinal mucosal barrier function, may seriously affect antigenic performance. Transportation ultimately affects the close two-way interaction between the gut microbiome and the immune system.

This interaction has a great impact on the formation of the host’s intestinal immune system function, and ultimately transforms genetic susceptibility into clinical results. This observation led to a re-examination of the possible causes of the epidemic of chronic inflammatory diseases, indicating the key pathogenic role of intestinal permeability.

Preclinical and clinical studies have shown that the zonulin family is a group of proteins that regulate intestinal permeability and is related to a variety of chronic inflammatory diseases, including autoimmune, infectious, metabolic and tumor diseases. These data provide new therapeutic targets for a variety of chronic inflammatory diseases, in which the zonulin pathway is related to their pathogenesis.

02 Bacteria, not genes, determine your health

Fasano pointed out that there are not enough genes to explain many chronic diseases, nor can genes explain the time of disease onset. He said that to solve these mysteries, we must pay attention to the microbiome, because “it is the interaction between individuals and the environment in which we live that determines the clinical fate of an individual.”

In addition to the microorganisms themselves, the condition of the intestinal mucosa also plays an important role. Fasano explained: “Although this huge mucosal interface (200 m2) is invisible, it plays a key role through the dynamic interaction with various factors in the surrounding environment, including microorganisms, nutrients, pollutants and other factors. substance.”

Although in the past it was thought that the tight junctions within cells were static and impermeable, we now know that this is not the case. As Fasano explained, zonulin is a powerful regulator of intestinal permeability. However, although zonulin is a biomarker of intestinal permeability and plays a pathogenic role in many chronic inflammatory diseases, not all chronic inflammatory diseases are caused by intestinal leakage. 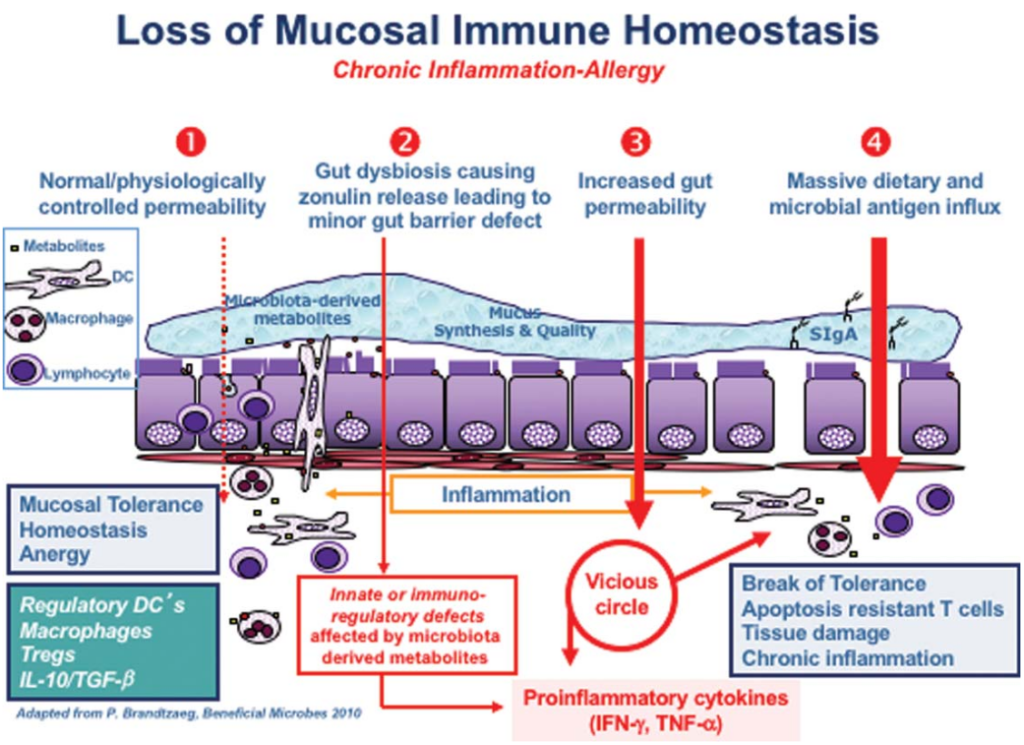 The two most powerful triggers for zonulin release are bacterial overgrowth and gluten. Zonin is produced in response to bad bacteria-it helps bacteria to expel the body by opening tight junctions, so bacterial overgrowth makes sense. But why does it respond to gluten?

Interestingly, the zonulin pathway misunderstands gluten as a potentially harmful component of microorganisms. This is why gluten triggers the release of zonulin. Although Fasano did not mention, the herbicide glyphosate also triggers zonulin and is 10 times more effective than gluten!

The subsequent permeability allows microbiota-derived antigens and endotoxins to migrate from the lumen to the lamina propria (the connective tissue of the intestinal mucosa), thereby triggering inflammation.

As the process continues to deteriorate (stage 3 in the figure above), the adaptive immune response begins, triggering the production of pro-inflammatory cytokines, including interferon gamma (IFN- gamma) and tumor necrosis factor alpha (TNF-alpha). These cytokines worsen the permeability and form a vicious circle.

The specific chronic inflammatory disease that eventually appears depends partly on your genetic makeup, partly on the type of contact you are exposed to, and partly on the composition of the intestinal flora.

In addition to genetic susceptibility and environmental triggers, the pathogenesis of various chronic inflammatory diseases also involves mutual intestinal permeability/Ag transport, immune activation, and changes in the composition/function of the intestinal flora.

In 2018, the discovered intestinal flora actually controls the anti-tumor immune response in the liver, and antibiotics can change the composition of immune cells to trigger tumor growth in the liver.

A way for the intestinal flora to improve the effectiveness of cancer treatment:

Activate your immune system and let it function more effectively.

Researchers have discovered that when these specific microorganisms are missing, certain anti-cancer drugs may not work at all.

06 The intestinal flora is part of the antiviral defense

Recent studies have shown that gut bacteria are also involved in antiviral defenses.

For the first time, researchers at Harvard Medical School have identified specific intestinal microbiota that regulate local and systemic immune responses and defend against viral invaders. This work identified a group of intestinal microbes, and a specific species of them, which can make immune cells release antiviral chemicals-type 1 interferon.

The researchers further identified the exact molecule shared by many gut bacteria, which opened the immune protection cascade. The researchers pointed out that this molecule is not difficult to separate and may become the basis of drugs that enhance human antiviral immunity. “

Although these findings need to be repeated and confirmed, they point to a possibility: You may be able to re-seed Bacteroides fragilis and other bacteria of the Bacteroides family in your intestines to enhance your antiviral immunity.

These bacteria initiate a signal cascade that induces the release of interferon to protect against virus invasion by stimulating immune cells to attack the virus and causing the virus-infected cells to self-destruct.

Specifically, a molecule residing on the surface of bacteria triggers the release of interferon by activating the so-called TLR4-TRIF signaling pathway. This bacterial molecule stimulates the immune signaling pathway, which consists of one of nine toll-like receptors (TLRs). Starting, TLR is part of the innate immune system.

07 The role of vitamin D

Recent research has also emphasized the role of vitamin D in gut health and systemic autoimmunity. A review article was published in “Frontiers in Immunology”:

Autoimmune diseases often lead to vitamin D deficiency, which changes the integrity of the microbiome and the intestinal epithelial barrier.

This review summarizes the impact of gut bacteria on the immune system, explores the microbial patterns that have emerged in autoimmune disease research, and discusses how vitamin D deficiency can help through its influence on the intestinal barrier function and flora composition For autoimmunity, and/or direct impact on immune response.

Vitamin D has a variety of direct and indirect regulatory effects on the immune system, including promoting regulatory T cells (Tregs), inhibiting the differentiation of Th1 and Th17 cells, impairing the development and function of B cells, and reducing the activation and stimulation of monocytes. Antimicrobial peptides of immune cells.

In other words, the relationship between vitamin D and autoimmunity is complex. In addition to immunosuppression, vitamin D also improves autoimmune diseases by affecting the composition of the flora and the intestinal barrier.

The article cited some studies that showed that vitamin D changes the composition of the gut microbiome. Generally speaking, vitamin D deficiency tends to increase Bacteroides and Proteus, while higher vitamin D intake tends to increase Prevotella and reduce certain types of Proteus and Firmicutes.

As we all know, vitamin D supports the defense of the intestine and immune cells. Vitamin D is one of the key ingredients needed to maintain tight junctions.

The intestinal epithelium continuously interacts with the external environment. The proper barrier integrity and antibacterial function of the epithelial surface are essential for maintaining homeostasis and preventing the invasion or over-colonization of specific microbial species.

Healthy intestinal epithelium and a complete mucus layer are essential to prevent the invasion of pathogenic organisms, and vitamin D helps maintain this barrier function. Multiple studies have found that vitamin D3/VDR signal regulates the number and distribution of tight junction proteins.

As a “leaky” protein that allows ions to enter the intestinal lumen, claudin-2 expression may cause colitis in the case of functional vitamin D deficiency.

Antimicrobial peptides are mainly secreted by Paneth cells in the intestines and are important mediators of the microbiome.

Defensins are secreted by epithelial cells, Paneth cells and immune cells, and are an important part of the innate immune response of the intestinal tract.

09 How vitamin D can cause autoimmune diseases

Vitamin D deficiency may affect the microbiome and immune system in the following ways, leading to autoimmune diseases: 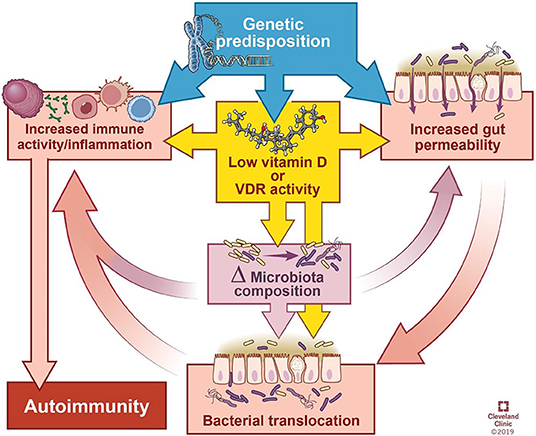 10 How to optimize the gut microbiome

The easiest, most effective and cheapest way to have a significant impact on the gut microbiome: regular consumption of fermented foods.

Avoid destroying or killing the microbiome, which includes:

If possible, try to avoid antibiotics. Antibiotic sterilization is treated equally, no matter good or bad.

Try to eat less conventionally raised meat and other animal products, as these may be fed low-dose antibiotics.