Development of gene and cell therapy for glaucoma

It is often due to certain eye diseases or systemic diseases and the application of certain drugs, which interfere with or disrupt the normal aqueous circulation, block the flow of aqueous humor and cause increased intraocular pressure. glaucoma. Secondary glaucoma is generally monocular and has no family heredity.

More and more people are exploring new therapies for glaucoma. Gene and cell therapy currently seems to be a good choice in the future. The definition of gene therapy for the eye is the introduction of genetic material (DNA or RNA) into eye cells to modify gene expression and achieve therapeutic effects. A common and effective method of administering genetic material to the eye is to use a viral vector, such as adenovirus (AAV) or lentivirus.

Generally, gene therapy vectors are administered in close proximity to the cells to be treated, specifically, the most important intracavitary and intravitreal injections. In addition to injection technology, the ability to transduce and target transgene expression to a certain cell type also depends on the cytotropism of the viral vector, which is affected by the viral capsid and serotype as well as the promoter regulatory sequence placed in it. .

A genetic switch, such as a glucocorticoid response element (GRE), can be included so that the transgene can be turned on and off by starting or stopping the use of specific drugs.

The advantages of gene therapy include the ability to specifically target the mechanisms and cells of known diseases. Gene therapy cannot replace cells that have been lost due to disease. Overall, the eye is very suitable for gene and cell therapy because it forms a separate area with immune privileges.

Cell therapy can generate trabecular reticulum cells from induced pluripotent stem cells and inject them into the anterior cavity to regenerate the trabecular reticulum cells lost due to chronic glaucoma (Figure 1). The proof of concept for this treatment has been provided in genetically modified myosin (MYOC) mutant mice with primary open-angle glaucoma, where cell therapy can improve outflow facilities, control intraocular pressure and block retinal ganglion cells Lost.

Interestingly, the main therapeutic effect of transplantation occurs by inducing the proliferation of the remaining endogenous trabecular meshwork cells. These results have been verified in the human eye perfusion culture solution. Potential future clinical applications may involve the accumulation of skin cells in patients with glaucoma, which then generates pluripotent stem cells and induces trabecular meshwork cells. These cells can then be administered intracranially back to the same patient to achieve a therapeutic effect. 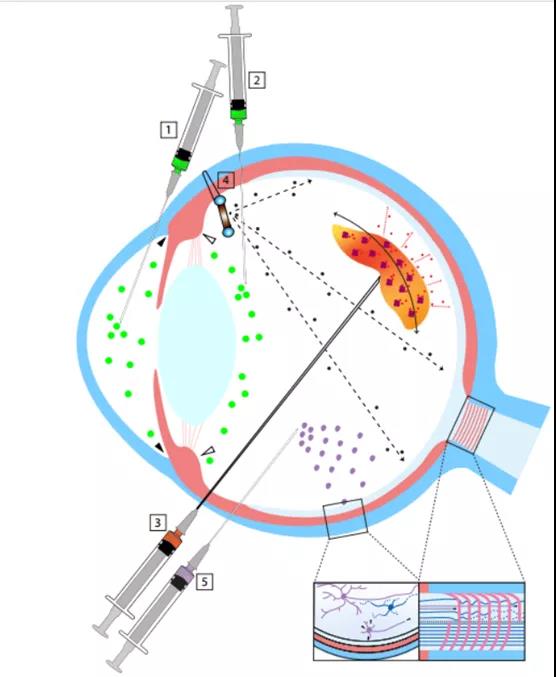 (Figure 1, a schematic cross-sectional view of the eye, showing a possible method of intraocular administration of glaucoma gene and cell therapy. (1) The gene therapy vector or cells used to treat the iridocorneal humor outflow channel are administered by intracameral injection. (2) Inject the anterior vitreous body through the plane of the ciliary body to target the ciliary epithelium; the reagent will also reach the anterior chamber and the outflow path of aqueous humor. (3) Gene therapy vectors or cells that will be used for neuroprotective therapy It is injected into the posterior part of the vitreous body near the surface of the retina and optic nerve head through the meibomian. (4) A capsule with transgenic cells that release neuroprotective agents is attached to the plane of the sclera and reaches the front part of the vitreous. (5) Retinal ganglion cells Transplant to restore vision by injecting it into the vitreous (not shown) behind the vitreous or under the inner restrictive membrane. If successful, the cells will embed in the retina and form axons, which extend through the optic nerve and connect with targets in the brain)

In many human and animal glaucoma patients, although the intraocular pressure is clearly and effectively controlled within its physiological range, the optic nerve continues to degenerate. The reason and mechanism of the death of retinal ganglion cells through apoptosis is not fully understood, and may not all be related to the biomechanical axon damage related to the intraocular pressure in the lamina of the optic nerve head.

Excitatory toxicity caused by excessive release of excitatory amino acids, the most important of which are glutamate and aspartic acid, neurotrophins are deprived from the retrograde axon transport block, and excessive intracellular calcium flows to the optic nerve head and retina. Impaired blood flow, oxidative stress, inflammation and autoimmune retinal and optic nerve antigens, and reactive gliosis.

Gene therapy is very suitable for the development of neuroprotective treatments for retinal ganglion cells, because first, many transgenes can be easily integrated into viral vectors to specifically modify molecular disease pathways; second, the retina located in retinal ganglion cells Ganglion cells. It can be directly targeted to the inner retina by intravitreal carrier administration (Figure 1).

The latter was mainly demonstrated with AAV in several animal species, including mice, rats, dogs, and monkeys. Their transduction efficiency is different, partly because of species-specific changes in the thickness of the limiting membrane in the retina (Figure 2).

Limited AAV membrane injections can improve the delivery of transgenes to the retina. Although other intraocular injection methods can also be considered, such as subretinal and suprachoroidal techniques, intravitreal administration of viral vectors appears to be the most effective target for retinal ganglion cells.

By Neurotech Pharmaceuticals, Inc. (Neurotech) and Lowy Medical Research Institute (LMRI) initiated the NT-501 clinical phase 2 study results have been published in the Journal of Ophthalmology of the American Academy of Ophthalmology. The study is a phase 2 multicenter, randomized clinical trial that tested the effect of encapsulated cell ciliary neurotrophic factor (CNTF) delivery on patients with macular telangiectasia type 2 (MacTel) retinal degeneration.

(1) allogeneic transplantation of adult induced pluripotent stem cells, which are programmed to assume the phenotype of retinal ganglion cells;

A major issue for veterinary ophthalmology is the progression of secondary glaucoma in dogs after phacoemulsification cataract surgery. Although the underlying molecular disease mechanism is unclear and may include the genetic susceptibility of certain breeds, the increase in intraocular pressure in many affected dogs is based on the formation of the pre-iris fibrovascular membrane covering the drainage pathway of aqueous humor, which leads to The up-regulation of internal pressure and vascular endothelial growth factor (VEGF) expression associated with canine lens-induced uveitis may contribute to the formation of the pre-iris fibrovascular membrane after cataract surgery.

Anti-neovascular gene therapy of the anterior chamber may be an effective treatment method. Several such gene therapy strategies have been developed for the posterior segment of human patients with neovascular diseases, the most important of which are age-related neovascular macular degeneration and diabetic retinopathy.