Redox Biology: Niacinamide is the key to treating glaucoma?

Redox Biology: Niacinamide is the key to treating glaucoma?  The researchers identified early metabolic changes in the retina in a rat model of glaucoma with high intraocular pressure, which were prevented by nicotinamide supplementation.

Glaucoma affects 80 million patients worldwide, and there are approximately 100,000 to 200,000 patients in Sweden. In glaucoma, the optic nerves of the eyes and brain are gradually damaged, which is usually related to the increase in intraocular pressure. Most glaucoma patients are over 50 years old, and there is a genetic risk.

The currently available treatment methods are the use of eye drops and surgery to treat intraocular pressure. Despite this, the risk of blindness in one eye is still high.

Researchers at Karolinska Institutet and St. Eric’s Eye Hospital are studying the effects of niacinamide (a derivative of vitamin B3) on animals and cell models of glaucoma, and have discovered neuroprotective therapies for the treatment of glaucoma. The results of this study were published in “Redox Biology” on May 17. 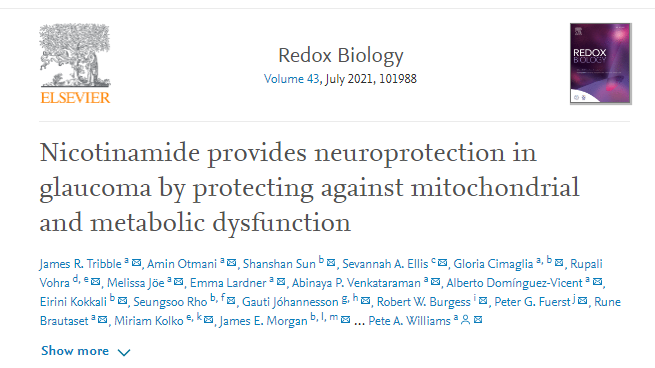 The level of nicotinamide in the serum of glaucoma patients is very low, that is, the low level of NAD+ (nicotinamide adenine dinucleotide) leads to the susceptibility of glaucoma. Previously, scientists have found that NAD+ in the retina decreases with age. The retinal ganglion cells are susceptible to intraocular pressure, which drives the neurodegeneration of glaucoma.

The reason for the degeneration of the optic nerve in glaucoma is not entirely clear, but researchers are currently focusing on new therapies to prevent the death of retinal ganglion cells and repair vision loss through the regeneration of diseased nerve fibers in the optic nerve. A multinational collaborative team study proved that glaucoma patients had significant visual recovery during the 6-month niacinamide treatment.

In animal models, nicotinamide is used to prevent NAD+ depletion and treat glaucoma. Researchers have proved that the use of niacinamide can increase NAD+ levels and improve the visual function of patients with glaucoma.

“In cell and animal models, we have confirmed the neuroprotective effects of nicotinamide, and even we have proved that the side effects of nicotinamide administration are not many.” said James Tribble, the first author of the study. Nicotinamide has a good long-term clinical history, coupled with good safety and high-dose tolerance, which has facilitated the rapid conversion to small-scale clinical trials. However, to translate into larger-scale trials, evaluate early intervention programs or longer-term clinical results, it is essential to understand the effects of niacinamide on retinal ganglion cells in neurodegeneration and normal physiological conditions. . 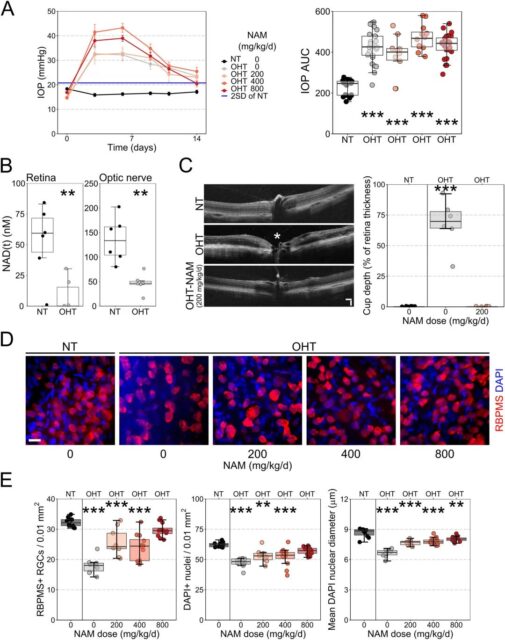 Nicotinamide can provide neuroprotection in a rat model of ocular hypertension

“We determined that nicotinamide provides many neuroprotective effects, including preventing metabolic stress, increasing the size and mobility of mitochondria. These data will support the long-term protective neurological therapy of nicotinamide in the treatment of human glaucoma.” Research leader Pete Williams said.

The researchers identified early metabolic changes in the retina in a rat model of glaucoma with high intraocular pressure, which were prevented by nicotinamide supplementation.