NEJM: What happens to caffeine intake during pregnancy?

NEJM: What happens to caffeine intake during pregnancy? What effect does drinking coffee have on the body? This review gives you the answer.

Coffee and tea are one of the most popular beverages in the world. Because it contains a large amount of caffeine, it is often consumed by people to refresh their minds and improve work efficiency. For a long time, people have been worried that coffee and caffeine will increase the risk of cancer and cardiovascular disease. However, recent studies have found that in addition to caffeine, coffee also contains polyphenols, alkaloids, vitamins and other biologically active substances, which can reduce oxidative stress, improve intestinal microbes, and regulate glucose and fat metabolism.

Researchers from the National University of Singapore published a review article in “The New England Journal of Medicine”, which comprehensively introduced the metabolism, physiological and toxic effects of coffee and caffeine in the human body, and the correlation with the risk of chronic diseases Sex, and the effects of caffeine intake during pregnancy. Let’s introduce it in detail below:

01 Metabolism, Physiology and Toxicity of Caffeine

After ingested into the human body, caffeine will be broken down by cytochrome P450 enzymes in the liver, metabolized into uric acid and excreted. Its half-life in adults is usually 2.5 to 4.5 hours, and there are large differences between individuals. On the one hand, the activity of caffeine metabolizing enzymes is genetically affected. On the other hand, a variety of drugs such as cardiovascular and antidepressant treatments will also slow down the elimination of caffeine due to competition for the same metabolic liver enzymes. Therefore, the interaction between it and caffeine should be considered when taking the drug.

Studies have shown that the accumulation of adenosine in the brain can increase a person’s drowsiness. The moderate dose (40 to 300 mg) of caffeine can antagonize the effects of adenosine, reduce fatigue, and improve human response sensitivity. Adding 100 to 130 mg of caffeine to analgesics can also increase pain relief. However, when caffeine is stopped suddenly after habitual intake of caffeine, it will cause withdrawal symptoms such as headache, fatigue and depression that last for 2-9 days. 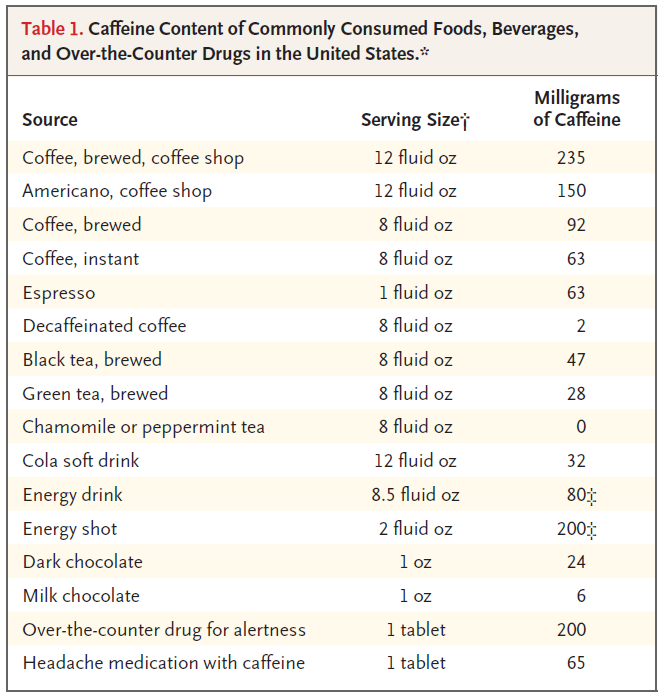 Prospective cohort studies have shown that there is no significant correlation between coffee drinking and increased risk of hypertension. However, in a randomized trial, compared with filtered coffee, large consumption of unfiltered coffee (six standard cups per day) increased LDL cholesterol levels by 17.8 mg/dL, which in turn led to an 11% increase in cardiovascular disease risk . Therefore, limiting the amount of unfiltered coffee consumed may help control serum cholesterol levels. Studies from other human experiments and cohorts have also shown that drinking up to 6 standard cups of caffeinated filtered coffee a day does not increase the risk of cardiovascular diseases such as atrial fibrillation, coronary heart disease and stroke. Drinking 3-5 cups of coffee a day can significantly reduce the risk of cardiovascular disease and death.

Analysis of metabolism revealed that caffeine can improve energy balance by reducing appetite, increasing basal metabolic rate and food-induced heat production, and its intake can slightly help control weight gain. In addition, blood glucose assessment found that caffeine intake will reduce insulin sensitivity in the short term, but caffeine-containing coffee (4 to 5 cups per day) for up to 6 months will not affect insulin resistance, regardless of whether the coffee contains coffee or not. Because there is a dose-response relationship between habitual drinking and the reduction of the risk of type 2 diabetes.

The effect of caffeine intake on the health of human organs

In many studies on the correlation between caffeine intake and cancer, it is believed that coffee and caffeine intake have no correlation with the increase in cancer incidence or cancer mortality. On the contrary, coffee intake can reduce skin cancer and breast cancer. Cancer, endometrial cancer, liver cancer, and gallbladder cancer. The caffeine and polyphenols in coffee can also resist liver steatosis and fibrosis, reducing the risk of liver cirrhosis.

The intake of caffeine also has a certain positive effect on neurological diseases. Studies have found that there is a strong negative correlation between its intake and the risk of Parkinson’s disease. Caffeine can prevent Parkinson’s disease in animal models by inhibiting dopaminergic neurotoxicity in the substantia nigra striatum and neurodegeneration caused by adenosine A2A receptor antagonism. Caffeine intake can also reduce the risk of depression and suicide. Drinking 2 to 5 standard cups of coffee a day can reduce all-cause mortality.

03 What happens to caffeine intake during pregnancy?

Prospective studies have found that higher caffeine intake is associated with a higher risk of pregnancy miscarriage and lower newborn birth weight. Caffeine may cause uterine placental vasoconstriction and hypoxia by increasing catecholamine levels in the mother and fetus. Although the evidence for the adverse effects of caffeine on fetal health is inconclusive, it is prudent to keep caffeine intake within 200 mg/day during pregnancy.

In summary, this review summarized a lot of evidence that drinking caffeinated coffee does not increase the risk of cardiovascular disease and cancer.

On the contrary, drinking 3 to 5 standard cups of coffee a day can reduce the risk of several chronic diseases and is beneficial to the human body.

However, excessive caffeine intake can have various adverse effects. Therefore, drinking coffee or tea in moderation can be put on the agenda, remember not to be greedy for a cup~