Summary: Top 10 Global Biotechnologies in 2020. In 2020, the continuation of the COVID-19 epidemic has made the world full of expectations amidst panic. Biotechnology has undoubtedly become the focus of the world’s most attention. As the authoritative magazines and media such as science and nature publish the selection of major global scientific discoveries and breakthrough achievements in 2020, comprehensively the impact on society, the hot spots of the industry, and the long-term development of the industry, this article selects the most important The top ten popular biotechnologies are reported in detail. 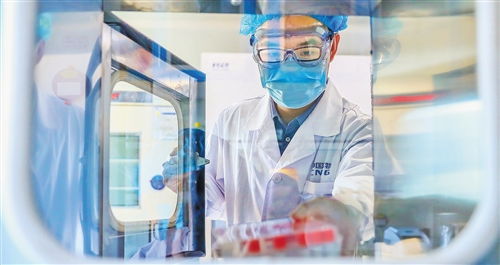 As the most important means of sniping against the COVID-19 virus, the research progress of the COVID-19 vaccine is undoubtedly the most attention. The vaccine research and development route has also expanded from the traditional inactivated vaccine and attenuated vaccine to the second-generation recombinant protein vaccine and subunit vaccine. Three generations of nucleic acid vaccines and adenovirus vector vaccines. Among them, nucleic acid vaccines include RNA vaccines and DNA vaccines.

Among many candidate vaccines, in addition to inactivated vaccines, mRNA vaccines have made the fastest progress and have the largest number of marketed. Including BioNTech/Pfizer/Fosun’s mRNA vaccine “BNT162b2” and Moderna’s mRNA vaccine “mRNA-1273”.

“BNT162b2” was first approved for emergency use in the United Kingdom on December 2, and has since been approved by Bahrain, Canada, Saudi Arabia, Mexico, and the United States. On December 21, it obtained a conditional sales license from the European Union, becoming a global The first approved mRNA vaccine for COVID-19, and also the world’s first successfully marketed nucleic acid vaccine and third-generation vaccine.

The previous phase III clinical trials of the vaccine showed 95% efficacy. However, with the large-scale vaccination of the vaccine, 8 people developed severe allergic reactions and two deaths occurred in Israel. Whether it is related to the vaccine remains to be confirmed. The subject is a population of 16 years and older.

“MRNA-1273” received emergency use authorization from the FDA on December 18. It is the world’s first clinically approved COVID-19 vaccine, and the second approved mRNA vaccine and nucleic acid vaccine. The results of phase III clinical trials of the vaccine showed that the protective effect reached 94.5%, and its side effects were higher than that of “BNT162b2”. The main subjects were people 18 years and older.

The DNA vaccine INO-4800 jointly developed by the American biotech company INOVIO and Suzhou Aidiweixin has carried out phase II/III clinical trials and phase II clinical trials in the United States and China, and the main subjects are people 18 years and older.

At present, adenovirus vector vaccines with a relatively fast development rate mainly include the “ChAdOx1 nCoV-19” developed by Oxford University/AstraZeneca and the “Recombinant Novel Coronavirus Vaccine ( Adenovirus vector) (Ad5-nCoV)”. The effectiveness of the “ChAdOx1 nCoV-19” vaccine is about 70%, and the effectiveness is questioned. The “recombinant new coronavirus vaccine (adenovirus vector) (Ad5-nCoV)” phase III clinical trial is underway, and no adverse reactions have occurred, and it has been approved for use in the military.

The vaccine in Phase III clinical phase is mainly the recombinant subunit vaccine “Recombinant Novel Coronavirus Vaccine (CHO Cell)” jointly researched by Zhifei Biology and the Institute of Microbiology of the Chinese Academy of Sciences. It is also some countries’s fifth new coronavirus vaccine to enter Phase III clinical trials.

In order to be able to treat COVID-19 pneumonia, scientists around the world continue to explore new methods and research specific drugs for the treatment of COVID-19 pneumonia. Among them, neutralizing antibody drugs have become the most eye-catching one.

Anti-neo-coronavirus neutralizing antibody drugs bind to the S protein on the surface of the neo-coronavirus and block its binding to the receptors on the host cell surface, thereby blocking its access to human cells and blocking the spread of the virus and infecting other cells. .

The global anti-coronavirus neutralizing antibody drugs under development have made breakthrough progress. Among them, Eli Lilly’s neutralizing antibody drug bamlanivimab (LY-CoV555) was authorized by the FDA for emergency use on November 9th. The monoclonal antibody JS016 (the first domestic neutralizing antibody to enter the clinic in cooperation with Junshi Biology and the Institute of Microbiology of the Chinese Academy of Sciences) Drug) and LY-CoV555 combination therapy BLAZE-1 new interim analysis data has also been disclosed.

Since the advent of gene editing technology, breakthroughs have been continuously made in research results surrounding it. In 2020, the Nobel Prize in Chemistry was awarded to the inventor of CRISPR/Cas9, making CRISPR the focus of academic discussions outside COVID-19. At the same time, further progress has been made in disease treatment.

On April 27, the results of the clinical trial of “the world’s first gene-editing technology to transform T cells for advanced refractory non-small cell lung cancer” conducted by West China Hospital showed that two of the 12 patients who received gene-edited T cell reinfusion therapy The median overall survival time was 42.6 weeks, and one of them maintained the efficacy for 76 weeks.

On July 22, Shanghai Bangyao Biotechnology and Xiangya Hospital of Central South University cooperated with the clinical trial results of the “Clinical Study on the Safety and Effectiveness of γ-globin Reactivated Autologous Hematopoietic Stem Cell Transplantation for the Treatment of β-Thalassemia Major”. The patient has been cured and discharged from the hospital. This is the first time that gene editing technology has been used to treat thalassemia in Asia, and it is also the world’s first successful treatment of β0/β0 type thalassemia through CRISPR gene editing technology.

On December 5, researchers from the Sarsh Cannon Institute, Boston University School of Medicine, etc., published an article proving that the use of CRISPR-Cas9 technology to edit autologous CD34+ cells and increase the expression of fetal hemoglobin can effectively treat sickle cell anemia (SCD) and Beta-thalassemia (TDT) is two common genetic defect diseases. At present, two clinical patients have reported that blood transfusion is no longer required. Researchers from Tel Aviv University in Israel conducted experiments on glioblastoma and metastatic ovarian cancer in mice, and modified the DNA of cancer cells by using CRISPR technology. The results showed that the cancer cells after treatment are no longer active and technical There are no side effects throughout the process, proving that CRISPR is very effective in treating various invasive cancers.

For many years, scientists have been committed to the study of accurately predicting protein structure through modeling methods. Many scientific research teams have used computer programs to detect the amino acids that make up the protein and use this to infer the three-dimensional structure of the protein.

On November 30, in the 14th International Protein Structure Prediction Competition (CASP), the new-generation AlphaFold artificial intelligence system developed by Alphabet’s company DeepMind won a high score of 92.4GDT, which accurately predicted how proteins are derived from linear amino acid chains. Curling into a 3D shape solves the long-standing puzzle of how proteins fold in biology.

On December 17, Amgen submitted a new drug application for the KRAS G12C inhibitor sotorasib to the FDA. Sotorasib is the first KRAS G12C inhibitor to enter clinical development and can inhibit the phosphorylation of extracellular signal-regulated kinase (ERK).

According to the published phase I clinical results, it has shown positive therapeutic effects in 129 solid tumor patients and is expected to be the first targeted drug approved for the treatment of KRAS G12C mutations in advanced NSCLC, but it has certain side effects. Previously, sotorasib has obtained FDA Breakthrough Drug Qualification (BTD) and Real-time Oncology Review Qualification (RTOR) authorization. KRAS is the most frequently mutated oncogene in human cancers.

Studies have found that 1/3 of the known cancers have KRAS activated. KRAS mutations are often related to the drug resistance of targeted therapies and poor prognosis of cancer patients. However, there are still no KRAS inhibitors approved.

On January 13, “PNAS” published an article announcing that American scientists used living cells extracted from frog embryos to create the world’s first “living robot” Xenobots. Xenobots is a new life form created by computer scientists at the University of Vermont and biologists at Tufts University in the United States. It is 100% new life created by frog cells. The length is less than 1 mm. It has a self-healing function and the ability to move in a specified direction.

Xenobots may be used to remove radioactive waste, collect marine microplastics, and remove arterial plaque. Researchers also said that by inducing regeneration of disease or injury sites, it may promote the application of regenerative medicine. However, due to the many unknown risks that Xenobots may have, they also face serious ethical issues.

After transplanting it to the back skin of immunodeficient mice, 55% of the skin grew hair, indicating that the transplanted skin has the growth and differentiation potential similar to human skin.

On December 16, “Nature” published the in vitro recombinant human organ “bladder assembly” developed by the team led by Professor Kunyoo Shin of Pohang University of Science and Technology in South Korea and Ja Hyeon Ku of Seoul National University Hospital. This is the world’s first Organoids reconstructed in vitro.

The bladder assembly is a multi-layered micro-organ tissue structure with epithelial cells, stromal cells and muscle cells. In the laboratory, the tissue matrix is ​​used to reconstruct stem cells and a variety of cells in three dimensions. At the single-cell level, these The bladder-like assembly exhibits the characteristics of a mature human bladder in terms of cell composition and gene expression, and can mimic the kinetics of in vivo regeneration of normal tissues in response to injury.

The research team has also developed a patient-specific urothelial carcinoma assembly, which can perfectly mimic the pathological characteristics of tumors in the body.

On the same day, “Cell” published the “3D cortex-motor nerve assembly” built by a team led by Associate Professor Sergiu Pasca of Stanford University School of Medicine. This is the world’s first working model of a human neural circuit responsible for autonomous movement.

The researchers first used human stem cells to grow an organoid similar to the cerebral cortex or hindbrain/spinal cord, and then allowed them to self-assemble with human skeletal muscle spheres in a petri dish to generate a 3D cortical-motor assembly.

This system proves that 3D culture has extraordinary self-assembly capabilities, forming functional circuits that can be used to understand development and disease.

The development of quasi-assemblies breaks through the limitations of the current organoid technology that cannot simulate the structure of mature organs and lacks the microenvironment within the tissue and the related effects between cells in the tissue. It is helpful for accurate modeling of intractable diseases such as cancer. This type of assembly is considered to be useful for new drug development and precision treatment.

The Sino-US Joint Photonic Laboratory team of Changchun Institute of Optics and Mechanics, Chinese Academy of Sciences has created a “DNA computer”-a bottle of customized DNA chain. The computer uses the presence or absence of a DNA strand to represent the binary number 0 or 1, and is controlled by up to five different wavelengths of light. By connecting with different DNA strands, using a table to convert the DNA strand into the corresponding light mode for calculation, Currently, the square root of 900 can be calculated.

But because it uses light mode for calculation, the system cannot do mathematical operations, and each input must be specially coded to avoid reacting with other inputs or producing wrong results.

With the continuous enhancement of technology, the computer may be used to perform more complex calculations and gradually realize a true “DNA computer”.