Summary of development and different technology of COVID-19 vaccines.  SARS-CoV-2 belongs to the Beta coronavirus genus in the coronavirus family. SARS-CoV-2 is an enveloped virus that contains a single-stranded positive-stranded RNA genome with a length of 29,903 nucleotides, 11 open reading frames (ORF), and can encode 27 viral proteins.

The reverse genetic system is a key tool for studying viruses and determining countermeasures. In response to the ongoing COVID-19 pandemic, we have recently developed an infectious complementary DNA (cDNA) clone for Severe Acute Respiratory Syndrome Coronavirus 2 (SARS-CoV-2). The reverse genetic system can be used to rapidly engineer viruses with desired mutations to study viruses in vivo and in vitro.

The virus can also be designed for the development of attenuated live vaccines, and the reporter gene can be used for engineering design to promote serological diagnosis, vaccine evaluation and antiviral screening. Therefore, the reverse genetic system of SARS-CoV-2 will be widely used in basic research and translational research. However, due to the large size of the coronavirus genome (about 30,000 nucleotides long) and some toxic genomic elements, the manipulation of the SARS-COV-2 reverse genetic system is not an easy task and requires complicated methods.

Here, we describe the technical details of how to design recombinant SARS-CoV-2. In general, the process includes six steps: (i) preparation of seven plasmids containing SARS-CoV-2 cDNA fragments, (ii) restriction digestion of these seven plasmids to prepare high-quality DNA fragments, ( iii) Assembling these seven plasmid cDNA fragments into genome-length cDNA, (iv) transcribing RNA from the genome-length cDNA in vitro, (iv) electroporating the genome-length RNA into cells to recover the recombinant virus, and (vi) Characterize the rescued virus. The agreement will enable researchers from different research backgrounds to master the use of reverse genetic systems, thereby accelerating COVID-19 research.

Generally speaking, live attenuated vaccines (Figure 2A) are usually produced by using avirulent strains of the virus and/or constructing a weakened form of the virus. The limited rounds of replication are not enough to cause disease, but can cause similar Immune response induced by natural infection. The weakening of the virus can be achieved by exposing the virus to unfavorable conditions, such as low temperature growth in an insensitive host or cell. Genetic modification can also use the RG system to optimize codons or delete genes that are harmful to the human body.

The advantages of using live attenuated SARS-CoV-2 vaccine candidates include targeting and stimulating strong mucosal and cellular immunity, which is the key to protection without the need for adjuvants. However, this type of vaccine has some disadvantages. For example: (1) SARS-CoV-2 has been shown to be excreted in the feces of infected patients, which creates a major safety issue, namely SARS-CoV-2 Live attenuated vaccines may be excreted in the feces of the vaccinated, resulting in the potential transmission of the virus to the unvaccinated. (2) The use of the SARS-CoV-2 live attenuated vaccine may increase the risk of recombination between the vaccine strain and the circulating wild-type virus, thereby generating new virus variants. (3) The production and formulation process is labor-intensive and requires strict quality control, which makes large-scale vaccine production slow to respond to pandemics.

As shown in Figure 2B, inactivated virus vaccines are usually produced by culturing SARS-CoV-2 working virus seeds in susceptible cell lines (such as Vero E6) and then chemically inactivating them. In addition, inactivated vaccines are usually adjuvanted with alum or special oils and then injected intramuscularly; this tends to generate a broad immune response because the vaccine induces the targeting of a series of different viral proteins such as S, M, and N. The targeted immune response of this vaccine is usually a humoral and cellular response, with almost no reactivity, which makes the vaccine highly safe. There have been more than 70 years of research on the development of such vaccines. However, the production and formulation of such vaccines currently face three challenges. (1) In a biosafety level (BSL) 3 facility, the infectious SARS-CoV-2 is cultured to a high titer (amplified) in vivo, which has a great impact on safety. (2) Inadequate chemical inactivation of the cultured virus will pose a potential risk to workers in production facilities, leading to disease outbreaks and/or harmful immune responses. (3) It is a challenge to produce billions of doses of virus in a short period of time, making the response to the pandemic particularly slow.

The protein subunit vaccine candidate (Figure 2C) relies on the expression of S protein or a simple region such as the receptor binding domain (RBD), or others, in different expression systems (including insect, mammalian and/or yeast cells) Viral genes. Therefore, this type of vaccine lacks many shortcomings, such as the pre-existing safety issues of anti-vector immunity, restoration of virulence, and incomplete virus inactivation; therefore, they are considered very safe after being injected into the vaccinated person. The target immune response is mainly humoral immunity, which is usually combined with adjuvants to improve immunity.

As shown in Figure 2D, the vaccine relies on the use of weakened viral vectors generated by the RG system. The advantages of these vaccines are the feasibility of their production process and a wide range of targeted immune responses, including humoral and cellular responses, without the need for adjuvants. In addition, these advantages and years of experience have made this platform recently produced some licensed vaccines, such as Ad-26 primer-modulated vaccine Ankara (MVA) boosted Ebola virus vaccine. However, there are some disadvantages when using these vaccines at present. (1) Existing immunity to the viral vector used will invalidate the developed candidate vaccine; however, this can be done by using another type of vaccine, such as a DNA vaccine, or by changing the difference between the main dose and the booster dose. The route of administration is minimized. (2) The viral vector itself induces an immune response and subsequently interferes with future vaccines using the same vector. (3) The strong response of vaccine recipients indicates that the use of certain viral vectors can induce genotoxicity; however, this can be minimized by using mixed vectors. (4) There is an opportunity for virus recombination during the production process.

The DNA vaccine (Figure 2E) depends on cloning the S gene of SARS-CoV-2 into a bacterial plasmid containing a powerful mammalian motive force (such as CMV and/or SV40), and then incubating a large number of plasmids in capable bacteria . In 1990, the first proof-of-concept DNA vaccine was tested by injecting DNA vectors expressing chloramphenicol acetyltransferase, luciferase and β-galactosidase into mouse skeletal muscle. DNA vaccines may have different antigen expression mechanisms. (1) The phagocytosis of plasmid-transfected somatic cells (such as muscle cells) by antigen-presenting cells (APC) such as dendritic cells leads to the presentation of antigens to CD4 and CD8 T cells. (2) Attract APC to the injection site, and then transfect with injected plasmid DNA; the expressed antigen is presented to T cells through major histocompatibility (MHC) class I and II complexes.

In contrast, RNA vaccines have shown very promising results in many preclinical studies. The recent research on COVID-19 has achieved significant success. Pﬁzer and Moderna’s U.S. FDAEUA approved vaccine candidates each have a protection rate of 95%. And 94.5%. Generally speaking, the development of mRNA vaccines is a simple process. Once the target antigen of the emerging pathogen is determined, the gene is sequenced and synthesized by chemical methods, such as adding specific signal peptides and transmembrane structures (Figure 2) to lock certain cell locations, and finally cloned into plasmid DNA . The plasmid DNA is then transcribed in vitro, after which the candidate vaccine can be tested in preclinical trials. In vivo, mRNA candidate vaccines use host cell mechanisms to translate mRNA into corresponding antigens, thereby stimulating humoral and cellular immune responses.

Currently, there are two types of mRNA vaccines. (1) Traditional or conventional mRNA encoding the gene of interest (GOI), composed of 50 and 30 untranslated regions (UTR). (2) Self-amplified mRNA mainly from the genome of ortho-strand RNA viruses, such as alpha virus and ﬂaviviruses. They are similar to traditional mRNA, but encode the viral replication machinery required for RNA amplification in the cell, which stimulates the high-level expression of GOI. Traditional and self-amplified mRNA vaccines have components similar to eukaryotic mRNA, such as cap structure, 50UTR, then GOI ORF, 30UTR, and finally poly-A tail. The manufacture of mRNA vaccines for different viral targets only needs to replace the sequence encoding the GOI without affecting the physical and chemical properties of the RNA molecule.

This vaccine has several advantages because it is highly safe against both humoral and cellular immune responses, does not lead to the integration of the human genome, has no anti-vector immunity, and has no chance of infection. However, this platform also has some disadvantages. (1) Storage at a very low temperature (Table 1) is a necessary condition to maintain the stability of the vaccine. (2) The high cost of the production process makes this vaccine not ideal for low-income countries. (3) There is a lack of systematic methods to determine the main physical and chemical degradation mechanisms of the final formulated mRNA vaccine. (4) The platform is a brand new platform, and there is still a lack of knowledge about its scale. 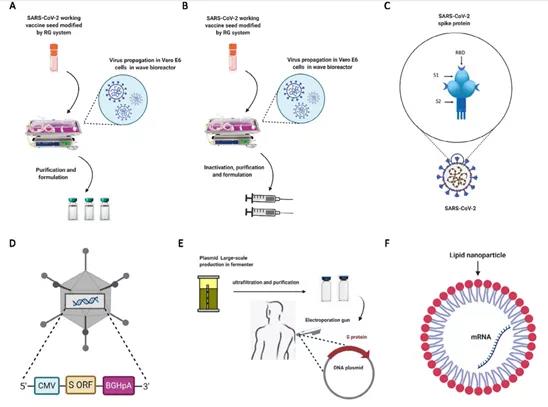 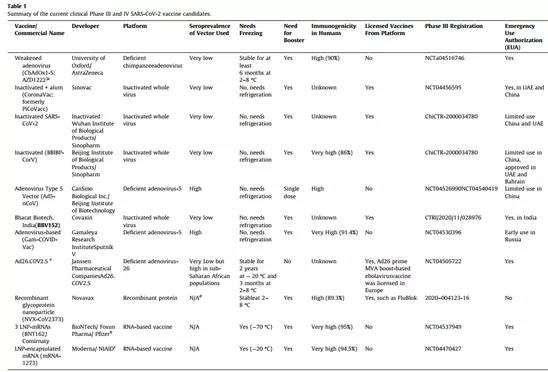 An in vitro study showed that the ChAdOx1 nCoV-19 (AZD1222) vaccine provided sufficient protection against the new B.1.1.7 variant. Among the symptomatic cases of the B.1.1.7 variant, 70.4% (95%) CI 43.6-84.5), while in symptomatic cases of non-B.1.17 variants, there was 81.5% protection. Another study showed that the two-dose regimen of Pﬁzer/BioNTech’s BNT162b2 vaccine can elicit neutralizing antibodies against the British and South African variants.

However, two doses of ChA-dOx1 nCoV-19 (AZD1222) vaccine were not effective against mild to moderate COVID-19 symptoms caused by the B.1.351 variant in South Africa. mRNA vaccines, including Pﬁzer/BioNTech (BNT162b2) and Moderna (mRNA-1273) vaccines are significantly less effective against British and South African variants. Therefore, the currently approved vaccines should continue to be evaluated, and new SARS-CoV-2 variants that inevitably continue to emerge should be monitored.

The main challenge in dealing with emerging and re-emerging viral diseases has always been in low- and middle-income countries, where at least half of the global population is represented. Therefore, in order to prevent and treat any emerging viral diseases, the large-scale production and global distribution of the developed vaccine should be as simple and clear as possible. This is also the advantage of live vaccines such as measles vaccine.

However, the situation is different for the SARS-CoV-2 vaccine candidates that have been licensed by the European Union or are undergoing Phase III trials, because many of these candidate vaccines are impossible to afford or cannot be afforded by low-income countries. It will be cost-effective. This is very important because it is necessary to vaccinate this huge population within a short period of time before any virus variants appear to establish herd immunity.

The SARS-CoV-2 inactivated vaccine may be more valuable than the live vaccine because it is more safe, especially for vulnerable people. However, expanding the scale of this vaccine requires the use of massively multiplying viruses under BSL3 conditions, and these laboratories and facilities are rarely located in low- and middle-income countries. Genetic vaccines (DNA and RNA-based vaccines) have considerable prospects; however, they have only recently been developed, and their long-term safety and effectiveness in humans require further investigation.

In addition, the recently approved mRNA SARS-CoV-2 vaccine by EAU is expensive and requires special logistics and transportation to low- and middle-income countries, which may not be the best choice for these countries. There are many viral vectors that have shown very promising results in clinical trials, but pre-existing immunity is the main challenge for most of them. Therefore, there are viral vectors that can circumvent existing immune challenges and scale up at low cost, such as measles, AAV, and certain serotypes of adenovirus (Chim-panzee or AD-26) and NDV carrier, will be an ideal platform for rapid production and distribution of effective vaccines.