Research directions for the development and optimization of mRNA vaccines

Research directions for the development and optimization of mRNA vaccines.  The mRNA vaccine ushered in the dawn, are we ready?

The development and technological breakthroughs of mRNA vaccines in recent decades have laid the foundation for its rapid rise during the COVID-19 pandemic. In less than a year after the global outbreak of COVID-19, two mRNA-based vaccines, BNT162b2 and mRNA-1273, have obtained emergency use authorization, and the CVnCoV mRNA vaccine has also progressed to phase 3 clinical trials.

Recently, the executive editor of the Journal of Controlled Release, Professor Stefaan C. De Smedt of Ghent University in Belgium published a commentary article titled: The dawn of mRNA vaccines: The COVID-19 case.

This review describes in detail the composition and clinical (pre) research status of these three vaccines, and discusses in depth the impact of their structural design on immunogenicity, and provides new insights into the mode of action of mRNA vaccines. It is also useful for future mRNA vaccines. Development and optimization put forward the research direction.

The COVID-19 mRNA vaccine represents a new class of vaccine products, consisting of synthetic mRNA encoding the SARS-CoV-2 spike glycoprotein. Lipid nanoparticles (LNP) serve as a carrier to encapsulate mRNA and deliver it to cells to express the encoded antigen, thereby stimulating the body to produce an immune response.

The reason why mRNA vaccines can seize the opportunity is inseparable from the following points:

1) Modification and purification of mRNA nucleotides.

As our understanding of innate immunity continues to deepen, Katalin Kariko and Drew Weissman first proposed to modify the nucleotides of IVT mRNA to prevent it from being recognized by the innate immune system and reduce its innate immunogenicity. At the same time, the removal of double-stranded RNA pollution further weakens the immunostimulatory activity of IVT mRNA, greatly reduces the production of pro-inflammatory type I IFN, and helps it achieve higher protein expression in the body.

LNPs are usually composed of an ionizable lipid and other auxiliary lipids. By selecting suitable lipids, the stability of LNPs can be improved, and the escape of endosomes can be promoted in the cell. The specific preparation process is that at a lower pH value, the ionizable lipid is positively charged and mixed with negatively charged mRNA through a microfluidic device, and the two are combined by electrostatic adsorption. Dialysis or ultrafiltration under the condition of pH 7.4 can obtain LNPs that are electrically neutral and tightly encapsulate mRNA.

3) A solid foundation for early research.

Based on the research on severe acute respiratory syndrome (SARS) and Middle East respiratory syndrome (MERS) coronaviruses, scientists have found that the coronavirus contains a single RNA genome that encodes four major viral proteins (spinous process, envelope) , Membrane and nucleocapsid) and some auxiliary proteins. Most of the neutralizing antibodies against MERS-CoV and SARS-CoV-1 are directed to the S protein, especially its receptor binding domain (RBD). The structure of the SARS-CoV-2 virus S protein was studied and it was found that it has a high homology with the S protein of the SARS-CoV-1 virus, which made vaccine developers immediately use the S protein as a key breakthrough for vaccines. 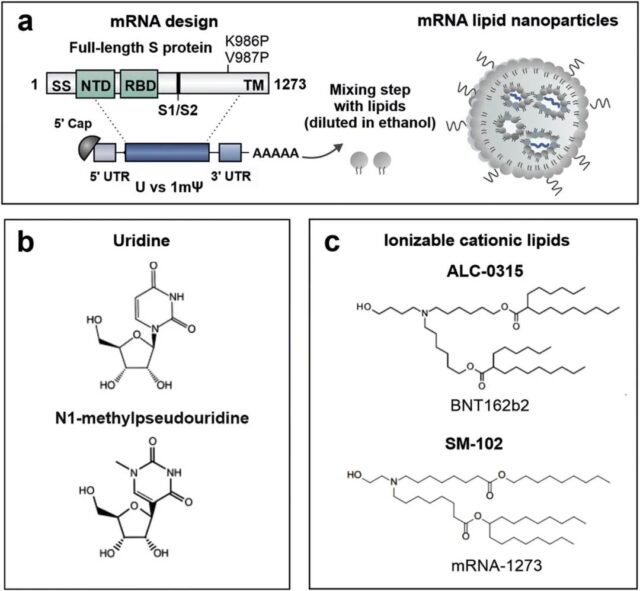 Figure 1. Design of COVID-19 mRNA vaccine. a). The COVID-19 mRNA vaccine contains the mRNA sequence encoding the full-length S protein with two proline substitution sites (K986P and V987P). The S protein gene sequence is flanked by structural elements in order to generate mature mRNA. Each of these elements can be optimized to regulate mRNA stability, translation ability, and innate immune activity. b). CVnCoV vaccine candidate uses unmodified uridine, while BNT162b2 and mRNA-1273 use N1-methylpseudouridine (1mψ) instead of uridine (U) for nucleoside modification. c). The ionizable cationic lipids ALC-0315 and SM-102 used in BNT162b2 and mRNA-1273 LNP formulations, respectively, and the ionizable cationic lipids used in CVnCoV formulations have not been disclosed

All current mRNA vaccines target the same SARS-CoV-2 antigen and contain mRNA encoding the full-length transmembrane-anchored S protein. However, its mRNA structure is different. BNT162b2 and mRNA-1273 use 1mΨ replacement and removal of dsRNA fragments in the mRNA production process to reduce the activation of TLR signals and cytoplasmic RNA sensors, and significantly reduce the innate immune response of mRNA. In contrast, CureVac does not use nucleotide-modified mRNA, but uses sequence optimization and selection of untranslated regions (UTRs) to enhance mRNA translation.

In order to allow mRNA to reach the cytoplasm to express the encoded antigen, the above three mRNA vaccines all use the LNP delivery system. The specific lipid composition in the CureVac prescription is unknown. The ionizable lipids used in the COVID-19 mRNA vaccines of BioNTech and Moderna are ALC. -0315 and SM-102, the PEG lipids used are PEG2000-DMA and PEG2000-DMG, respectively. The common auxiliary lipids of the two are DSPC and cholesterol. The molar ratio of each lipid of the above three mRNA-LNPs is ionizable lipid:phospholipid:cholesterol:PEG-lipid=50:10:38.5:1.5, and the mass ratio of mRNA-lipid is 0.05.

Due to the introduction of ester bonds in the lipid tail, ALC-0315 and SM-102 have better biodegradability. Studies have shown that SM-102 lipids are more effective than Onpattro’s MC3 LNPs when delivering mRNA, because SM-102 has better tolerance and higher endosome escape efficiency. It can be seen that the difference in lipid structure and composition may have a huge impact on the delivery efficiency of mRNA.

The PEG lipids in the prescription can improve the stability of LNP during preparation and storage, and these PEG lipids generally contain short acyl chains, which help PEG lipids to be separated from LNPs quickly after injection, and promote the interaction of LNPs and cells. interaction. However, the intracellular transport and mechanism of how LNPs enable mRNA to escape from endosomes to the cytoplasm are still not fully understood.

It is hypothesized that the ionizable lipid components (pKa<7) in LNPs are protonated due to the acidic environment of the endosomes and exchange with the anionic phospholipids on the membrane. This lipid mixing induces the non-bilayer structure transformation of LNPs (that is, the transformation from lamellar to inverted hexagonal phase), thereby promoting the release of mRNA LNPs.

These membrane fusions and structural changes of LNPs are believed to be responsible for the instability of endosomal membranes and the escape of mRNA.

3. The mode of action of mRNA vaccines

So, how does the mRNA vaccine work after it is delivered to the body?

Similar to the mechanism of the classic vaccine, when the COVID-19 mRNA vaccine is injected intramuscularly, it will cause local and transient inflammation and recruit different immune cells to the injection site. Among them, monocytes and DCs are mainly transfected with mRNA. These locally transfected antigen-presenting cells (APCs) then migrate to the draining lymph nodes and present antigens to B cells and T cells.

In addition, due to its relatively small size (~100 nm), neutral surface charge and diffusible PEG lipid membrane, mRNA LNPs may also enter the lymphatic vessels and directly target APCs and B cells residing in the lymph nodes. It cannot be ignored that cell types such as muscle cells, epithelial cells, and fibroblasts may also promote local mRNA expression. At the same time, mRNA vaccines also need to participate in innate immunity to improve the ability to induce and regulate antigen-specific immune responses. 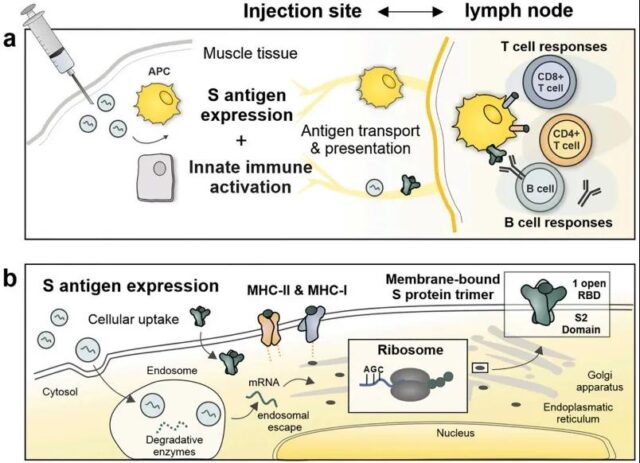 Figure 2 Mode of action of mRNA vaccines. (a At the injection site) mRNA LNPs trigger a transient inflammatory response, recruiting neutrophils, monocytes and dendritic cells to the injection site. (b at the cellular level) In order to avoid lysosomal degradation, mRNA must escape endosomes and bind to ribosomes. This is a complex rate-limiting process that is achieved by ionizable LNP carriers

The COVID-19 mRNA vaccine mainly induces B cells to produce neutralizing antibodies. Observations of COVID-19 patients have found that if CD4+ T cells and CD8+ T cells can produce a coordinated adaptive immune response, the disease symptoms will be mild, and vice versa. It. This indicates that CD8+ T cell and CD4+ T cell responses also help prevent SARS-CoV-2.

In terms of humoral immunity, studies have shown that the SARS-CoV-2 neutralizing antibody titers induced by two doses of CVnCoV vaccine (12 μg mRNA dose) are comparable to those of individuals who have recovered from natural infections. In contrast, the nucleoside modified mRNA vaccines BNT162b2 and mRNA-1273 have higher antibody titers, which suggests that the nucleotide modified mRNA vaccines will cause a stronger humoral immune response. In addition, BNT162b2 and mRNA-1273 have undergone nucleotide modification, which increases the body’s tolerated dose. They may achieve longer-lasting protein expression, thereby prolonging antigen persistence, which is important for enhancing the germinal center (GC) response. Is advantageous.

At present, a major factor that plagues the development of COVID-19 vaccines is the mutation of the virus, and these mRNA vaccines have also evaluated their effectiveness against virus variants, including the newly emerged British variants (B1.1.7) and South African variants (B. 1.351). The results showed that mRNA-1273 and BNT162b2 had neutralizing activity against mutant B1.1.7. Another Moderna study pointed out that for B.1.351, although the neutralization titer decreased, it was still higher than the expected protection level, and the serum of all individuals could be completely neutralized. In response to the mutant virus, corresponding vaccines are also being developed.

5. The safety of the COVID-19 vaccine

As a new type of vaccine form, mRNA vaccine seems to be more likely to cause systemic adverse reactions, especially fever, compared with other candidate vaccines. It has been reported that rare allergic reactions occurred after vaccination of mRNA-1273 and BNT162b2 vaccines, which may be related to PEG lipids and PEG antibodies that exist in the body.

It is undeniable that the speed at which the COVID-19 mRNA vaccine has obtained market approval is historical. While the SARS-CoV-2 pandemic promotes the development of COVID-19 mRNA vaccines, it has also accelerated the progress of mRNA vaccines for other infectious diseases (such as influenza, rabies virus, Zika virus, etc.). However, there are still some unsolved mysteries about its mode of action. How does the innate immune response of LNPs mRNA affect the transfection and translation ability, immunogenicity and reactogenicity of the vaccine? How long can the preventive effect last? Is there room for further improvement… mRNA vaccines have ushered in a golden period of development, and we should seize the opportunity to uncover more of its secrets.