Eli Lilly recently announced that it will evaluate the dual GIP/GLP-1 receptor agonist tirzepatide for the treatment of 2 diabetes head-to-head phase 3 SURPASS-2 clinical trials for 40 weeks The results showed that in adult patients with type 2 diabetes, compared with Novo Nordisk’s injection of semaglutide (semaglutide, 1 mg, subcutaneously, once a week), 3 doses of tirzepatide (subcutaneously, once a week) It has shown superiority in reducing blood sugar (A1C) and body weight.

These results were simultaneously published in the New England Journal of Medicine (NEJM) and announced at the 81st Scientific Meeting of the American Diabetes Association (ADA) on June 25-29.

In this study, the overall safety of tirzepatide is similar to the recognized glucagon-like peptide-1 (GLP-1) receptor agonist class. In all treatment groups, the most common adverse reactions were gastrointestinal-related adverse reactions.

SUPERSESS-2 is the second of 5 global registration studies evaluating tirzepatide in the treatment of type 2 diabetes, all of which have been completed. Eli Lilly intends to submit complete registration information to the regulatory authorities before the end of 2021.

Juan Pablo Frias, the lead investigator of the SURPASS-2 trial and the medical director of the National Institutes of America, said: “Compared with semaglutide, tirzepatide has a better effect on lowering blood sugar and weight. Importantly, many patients receiving tirzepatide Achieve a significant reduction in A1C without experiencing hypoglycemia (<54mg/dL).

These findings are meaningful, and we are currently continuing to evaluate the overall efficacy and safety of this potential new treatment option for patients with type 2 diabetes .”

Mike Mason, President of Eli Lilly Diabetes, said: “In this study, tirzepatide has shown excellent effects in controlling blood sugar and reducing weight. These two indicators are both important indicators to measure the health of patients with type 2 diabetes. As diabetes A leader in the field of care, Eli Lilly is committed to providing innovative solutions for patients with type 2 diabetes, including this dual GIP and GLP-1 receptor agonist, which uses the effects of two incretins. 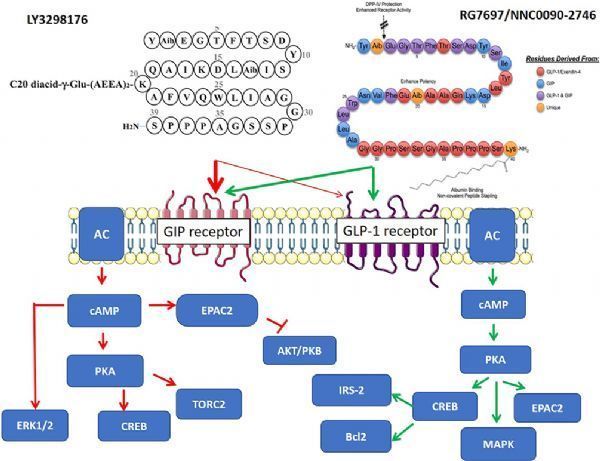 SUPERSESS-2 is a 40-week randomized, open-label trial conducted in adult patients with type 2 diabetes to evaluate the efficacy and safety of tirzepatide and semaglutide as additional therapies for metformin. A total of 1879 patients were enrolled in this study. The average duration of diabetes in these patients was 8.6 years, the baseline A1C was 8.28%, and the baseline weight was 93.7 kg.

In this study, two estimation methods (Efficacy estimate [Efficacy estimand] and treatment plan estimate [Treatment-regimen estimand]) were used to compare treatment differences. Effectiveness estimand refers to the effect before stopping the study drug or starting rescue therapy to treat persistent severe hyperglycemia. Treatment-regimen estimand refers to the efficacy of treatment of persistent severe hyperglycemia regardless of whether the study drug is adhered to or whether rescue therapy is used.

The results showed that the study reached the primary endpoint and key secondary endpoints using two estimating methods: all three doses (5mg, 10mg, 15mg) of tirzepatide had better blood glucose (A1C) and weight reduction effects than semaglutide . Among patients treated with the highest dose of tirzepatide (15 mg), 92% of patients had A1C <7% (the American Diabetes Association [ADA] recommended treatment goal for diabetic patients), while 81% of patients treated with semaglutide had A1C <7 %. 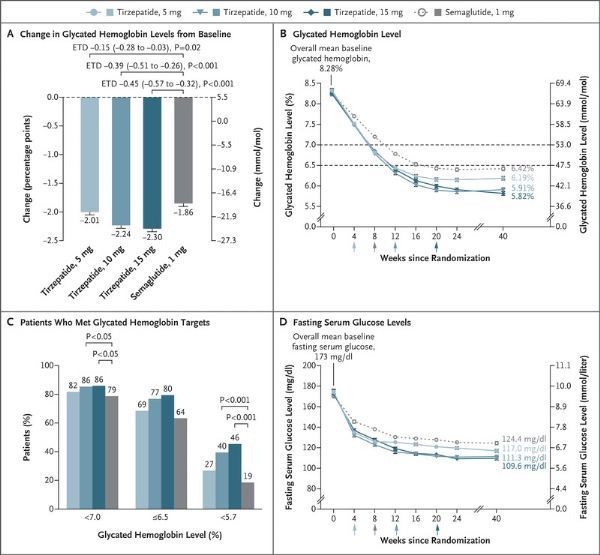 Hypoglycemic effect (picture comes from literature PMID: 34170647, click on the picture to see a larger picture)

The three doses of tirzepatide are better than semaglutide in reducing A1C and body weight. A higher proportion of patients achieve A1C<7% ​​target. There is a statistically significant difference between 10mg and 15mg, and 5mg does not reach statistical significance. The specific results are: 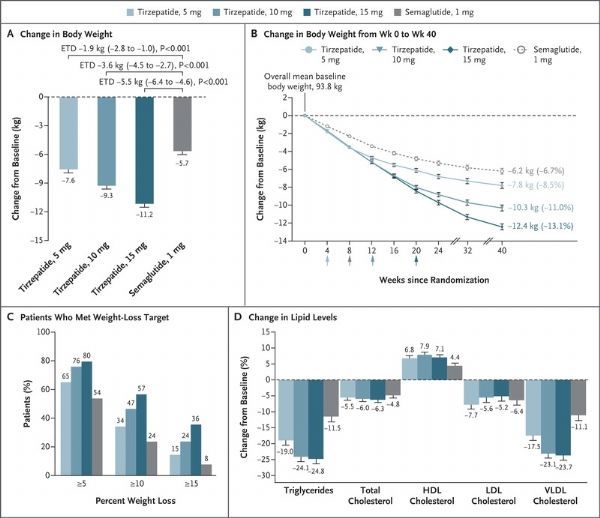 The effect of reducing body weight and lipids (picture from the document PMID: 34170647, click on the picture to see a larger picture)

In another exploratory endpoint, all three doses of tirzepatide resulted in a favorable change in fasting blood lipids from baseline levels. Specifically, at the highest dose of tirzepatide (15mg): triglycerides were reduced by 24.8%, very low-density lipoprotein (VLDL) cholesterol was reduced by 23.7%, and high-density lipoprotein (HDL) cholesterol was increased by 7.1%.