This trial is the largest clinical trial in the SURPASS project so far. The data shows that in adults with type 2 diabetes, compared with Novo Nordisk’s injection drug semaglutide (semaglutide, 1mg), three doses of tirzepatide are more effective.

In addition, 51% of patients treated with high-dose tirzepatide (15mg) had A1C lower than 5.7%, which is the level observed in people without diabetes, while only 20% of patients treated with semaglutide Of patients with A1C lower than 5.7%. In this study, the overall safety of tirzepatide was similar to previously reported clinical trials and recognized glucagon-like peptide-1 (GLP-1) receptor agonists. In all treatment groups, the most common adverse reactions were gastrointestinal related.

Tirzepatide is a once-a-week glucose-dependent insulinotropic polypeptide (GIP, also known as gastric inhibitory polypeptide) receptor and glucagon-like peptide-1 (GLP-1) receptor dual agonist developed by Eli Lilly. . Both GIP and GLP-1 are hormones secreted by the intestinal tract, which can promote insulin secretion. Tirzepatide integrates the effects of two insulin-promoting agents into a single molecule and represents a new class of drugs for the treatment of type 2 diabetes. Semaglutide is a drug developed by Novo Nordisk, which is a GLP-1 receptor agonist used to treat type 2 diabetes.

It is worth mentioning that tirzepatide is the first dual GIP/GLP-1 receptor agonist to complete Phase 3 trials. In December 2020, Eli Lilly announced that the Phase III SURPASS-1 monotherapy study had reached the primary and secondary endpoints: Compared with the placebo group, the glycosylated hemoglobin (A1C) and body weight of patients in the tirzepatide treatment group were significantly lower than baseline. In February 2021, the Phase III SURPASS-3 study also reached the primary and secondary endpoints.

Mike Mason, President of Eli Lilly Diabetes, said: “In the United States, nearly 90% of type 2 diabetes patients are overweight or obese. We are committed to providing solutions that can not only effectively reduce glycosylated hemoglobin, but also significantly reduce weight to meet their needs. These amazing results exceeded our expectations and support our belief that all three doses of tirzepatide are potential new treatment options for patients with type 2 diabetes.”

Juan Pablo Frias, MD, lead investigator of the SURPASS-2 trial, said: “Head-to-head studies are the gold standard for clinicians to evaluate the effects of trial treatments. These results show that in the treatment of type 2 diabetes, compared with the highest approved dose of semaglutide, all The three doses of tirzepatide have shown superiority in reducing blood sugar and weight. Newer treatment options may help patients with type 2 diabetes to achieve A1C and weight loss goals. In the SUPERSEX-2 trial, tirzepatide provided clinically significant The curative effect exceeds the curative effect of existing GLP-1 receptor agonist drugs.” 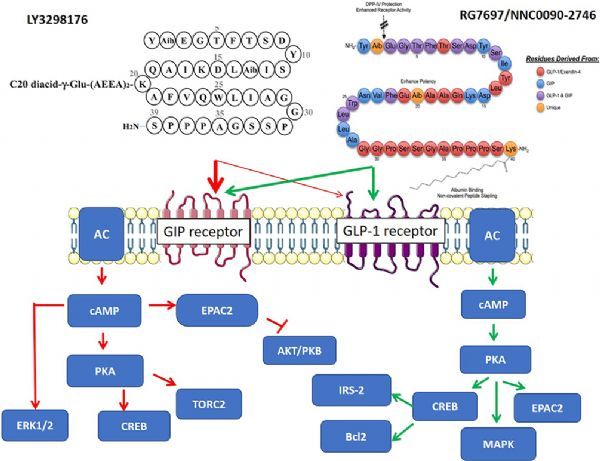 tirzepatide (LY3298176, picture from literature: Dual GIP–GLP1-Receptor Agonists In The Treatment Of Type 2 Diabetes A Short Review On Emerging Data And Therapeutic Potential)

SUPERSESS-2 is a 40-week randomized, open-label trial conducted in adult patients with type 2 diabetes to evaluate the efficacy and safety of tirzepatide and semaglutide as additional therapies for metformin. A total of 1879 patients were enrolled in this study. The average duration of diabetes in these patients was 8.6 years, the baseline A1C was 8.28%, and the baseline weight was 93.7 kg.

In this study, two estimation methods (Efficacy estimate [Efficacy estimand] and treatment plan estimate [Treatment-regimen estimand]) were used to compare treatment differences. Effectiveness estimate (Efficacy estimand) refers to the effect before stopping the study drug or starting rescue therapy to treat persistent severe hyperglycemia. Treatment-regimen estimand refers to the efficacy of treatment of persistent severe hyperglycemia regardless of whether the study drug is adhered to or whether rescue therapy is used.

The results showed that the study reached the primary endpoint and key secondary endpoints using two estimating methods: all three doses (5mg, 10mg, 15mg) of tirzepatide had better blood glucose (A1C) and weight reduction effects than semaglutide . Among patients treated with the highest dose of tirzepatide (15 mg), 92% of patients had A1C <7% (the American Diabetes Association [ADA] recommended treatment goal for diabetic patients), while 81% of patients treated with semaglutide had A1C <7 %. The specific results are shown in the following table:

In the treatment plan estimation, the three doses of tirzepatide were superior to semaglutide in reducing A1C and body weight. A higher proportion of patients achieved the A1C <7% target. There was a statistically significant difference between 10 mg and 15 mg, and 5 mg did not reach statistical significance. The specific results are: