Sage Therapeutics and Biogen recently announced that the double-blind placebo-controlled Phase 3 WATERFALL study evaluating the antidepressant zuranolone (SAGE-217/BIIB125) in patients with major depressive disorder (MDD) reached the primary endpoint: based on 17 items The total score of the Hamilton Depression Rating Scale (HAMD-17), on the 15th day, compared with placebo, patients treated with zuranolone 50 mg had a statistically significant and clinically significant reduction in depressive symptoms.

In addition, the results of HAMD-17 on the 3rd, 8th, and 12th days showed that the zuranolone treatment took effect quickly. Patients who responded to zuranolone on day 15 retained an average of 86% of the HAMD-17 improvement on day 42 (4 weeks after the end of dosing), indicating that zuranolone had a long-lasting effect. In this study, zuranolone was generally well tolerated and its safety was consistent with previous clinical studies.

Anita H. Clayton, director of the Department of Psychiatry and Neurobehavioral Sciences at the University of Virginia School of Medicine, commented: “I am very excited about these breakthrough data: we know that the onset of MDD is sporadic, and zuranolone has the potential for sporadic treatment. The WATERFALL study and the previous LANDSCAPE study provide data on short-term and long-term use of zuranolone. These data show that if approved, zuranolone has the potential to act quickly in a short course of treatment, and is well tolerated, and can maintain long-term efficacy. “ 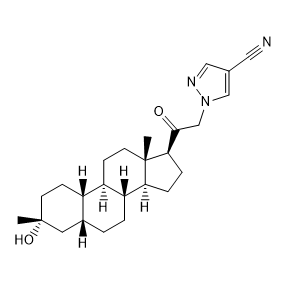 For the past 60 years, monoamine antidepressants have been the standard treatment for long-term treatment of MDD. This type of drug is a daily treatment method that requires sufficient exposure and continuous use to maintain the efficacy.

Zuranolone is a two-week, once-a-day oral medication that is currently being developed to treat MDD and postpartum depression (PPD). The drug is a small molecule drug designed to provide a fast-acting and sustainable treatment plan, and may represent a breakthrough in current depression management.

Zuranolone is an oral neuroactive steroid (NAS) GABAA receptor positive allosteric modulator (PAM). The GABA system is the main inhibitory signal pathway of the brain and central nervous system, and plays an important role in regulating brain function. Previously, the US FDA has granted zuranolone a breakthrough drug designation.

WATERFALL is a pivotal, double-blind, randomized, placebo-controlled phase 3 study conducted in 18-64-year-old adults with MDD (N=543) to evaluate the efficacy and safety of zuranolone 50mg. The MDD patients enrolled in this study had a total score of HAMD-17 ≥ 24 points at the time of screening and one day before the administration. In the study, patients were randomly assigned to receive zuranolone 50mg or placebo, which was taken once every night for a total of 14 days. The primary endpoint of the study was the change from baseline in HAMD-17 total score on day 15; the first secondary endpoint was the change from baseline in clinical overall impression disease severity (CGI-S) on day 15.

The above table lists the top-line results of the primary endpoint and several secondary efficacy endpoints during the treatment period. All results are in favor of zuranolone:

In this study, the adverse events are consistent with the safety of zuranolone observed in clinical studies so far. The incidence of adverse events (TEAE) during treatment in the zuranolone group was 60.1% (161/268), compared with 44.6% (120/269) in the placebo group. The majority of TEAEs were mild to moderate. In the zuranolone group and placebo group, 8 cases (3.0%) and 3 cases (1.1%) had serious TEAEs, respectively.