Depression (MDD) is a common mental disorder, mainly manifested as depression, decreased interest, slow thinking, poor diet and sleep and other symptoms. MDD patients are associated with cardiovascular disease, diabetes, and Alzheimer’s disease. Related to the increase, the mortality rate is also higher.

Depression (MDD) is a common mental disorder, mainly manifested as depression, decreased interest, slow thinking, poor diet and sleep and other symptoms. MDD patients are associated with cardiovascular disease, diabetes, and Alzheimer’s disease. Related to the increase, the mortality rate is also higher. So far, the cause of depression is not clear.

According to statistics from the World Health Organization, more than 350 million people worldwide suffer from depression, which has become the world’s fourth most common disease, and it is still growing rapidly. WHO predicts that depression will become the number one disease with the global burden of disease in 2030.

On October 4, 2021, researchers from the University of California published a research paper entitled “Closed-loop neuromodulation in an individual with treatment-resistant depression” in the journal Nature Medicine.

The research developed a precision medicine method that successfully treated depression in patients by identifying and regulating brain circuits, paving the way for a new paradigm urgently needed in psychiatry. 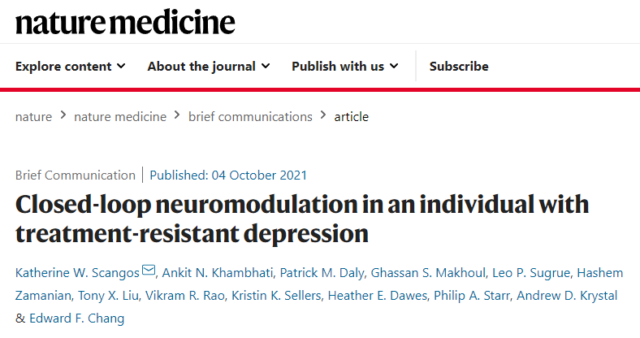 Researchers manually tracked the location of the patient’s depression in the brain and found a biomarker, a specific brain wave pattern, which was not previously found in major depression, and used it to personalize the machine. Stimulate at the time and place where the biomarker is expressed. 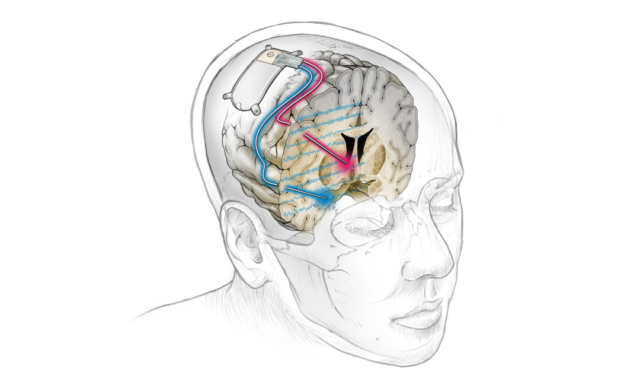 Blue is used to detect biomarkers, red is located in the ventral sac for stimulation

The first author of the study stated that not only did we determine the correct brain circuits and biomarkers, but we were also able to replicate them at completely different stages using implanted devices in the later stages of the trial. This success in itself is an incredible advancement in our understanding of the brain function that causes mental illness.

The researchers emphasized that so far, this new successful result has been achieved in only one patient. There have been many other studies on deep brain stimulation that have not yielded results in trials, and we do not know how this method will develop over time.

It is exciting to stimulate the brain only when symptoms appear, and it is also a new method of using deep brain stimulation in depression. In past studies, stimulation was performed continuously at preset time intervals, rather than when specific depressive brain activity occurred. This in itself may be a huge change that makes the technology more successful.

But this biomarker is probably not universal, which means that researchers need to find the corresponding biomarker for each patient in order to be able to treat them in the same way.

The team is already recruiting more patients to participate in this study to see if they can find more personalized depression markers and provide them with their own specialized treatments.