JAMA: The latest research from Harvard University shows that you often use social media and beware of depression

In modern society, as the pace of life is getting faster and faster, work pressure is increasing, but entertainment time is getting less and less.

These complex social factors cause anxiety, negative emotions to grow like weeds, and the psychology of depression Diseases are also becoming more common in the general population.

Depression (Depression) , with a significant and persistent low mood as the main clinical features are the main types of mood disorders.

Clinically, it can be seen that depression, depression, inferiority, depression, and pessimism are in the world, and some patients even have suicidal attempts or behaviors. more importantly,

The current drugs used to treat depression are very limited and often have serious side effects .

In recent years, the popularity of smart phones has greatly increased the use time of social media. Studies have shown that the use of social media is related to the risk of depression, especially among children and young people .

The study found that more than 5,000 adults were screened for depression and found that they reported using Snapchat (a photo-sharing app) , Facebook (the world’s largest social media) or TikTok during the first screening without depression. People who are more likely to have a higher level of depression during follow-up screening.

This study reminds us that there is an association between using social media and worsening depressive symptoms .

The research team used the PHQ-9 Depression Screening Scale to evaluate depression. Among 8045 adults with a score of 5 or less on the first screening (that is, no depression) , 5395 completed the follow-up survey.

Among those who completed the follow-up survey, 482 (8.9%) had an increase in their scores or more during the second screening (showing mild depression) .

In the adjusted regression model, the use of Snapchat , Facebook, and TikTok in the first survey was significantly associated with an increased risk of self-reported depressive symptoms, with risks increased by 53%, 42%, and 39%, respectively.

Further analysis revealed that the association between the use of Snapchat , Facebook and TikTok and depression is related to age .

For TikTok and Snapchat, use in people 35 or older is associated with depressive symptoms, but not in people under 35.

About the PHQ-9 Depression Screening Scale

The PHQ-9 scale is a simple and effective self-rating scale for depression. It has good credibility in the diagnosis of depression and evaluation of the severity.

It answers 9 questions based on the situation in the past two weeks, each The questions all have “no”, “a few days”, ” more than half of the time “, and ” almost every day “.

These four options correspond to 0, 1, 2, and 3 points respectively, and all the points are added together. 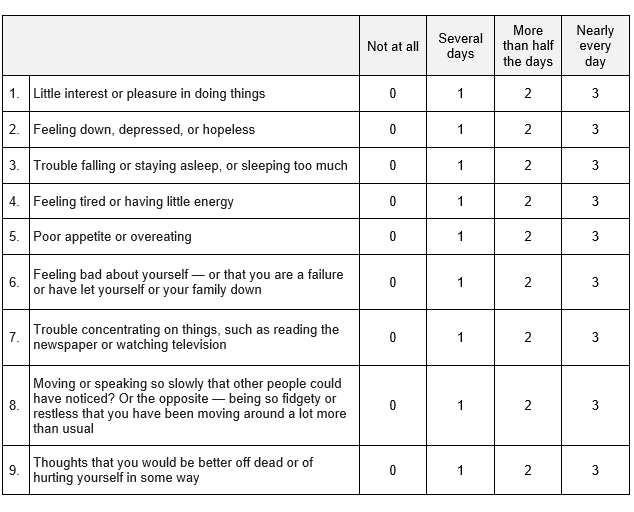 What is your score?