The researchers from Harvard University Medical School found that these alkylation characteristics were significantly related to the intake of processed or unprocessed red meat before diagnosis, but not to the intake of other foods or other lifestyle factors.

1. Does eating meat really cause cancer?

Since then, the controversy of “eating meat causing cancer” has intensified.

After the report was published at that time, the Multinational Meat Association questioned the results of the study, believing that the results were “unscientific, careless, and unobjective”, which was a blatant provocation against numerous previous reports.

Faced with controversies from all parties, Francisco Blanca, then Director of the Department of Nutrition, Health and Development at the WHO headquarters in Geneva, explained that the report was based on over 800 items related to the consumption of processed meat products and red meat and human diseases. The conclusion drawn after reviewing the research results of cancer relationship.

Regarding the relationship between red meat and carcinogenesis, Blanca said that due to the limited data currently available, if the amount of red meat is not consumed now, it is recommended not to increase it.

Blanca also emphasized that the original intention of the report is not to prevent people from eating these meats, but to remind everyone that reducing the consumption of these meats can reduce the risk of cancer.

2. The latest research: red meat may promote the development of colorectal cancer

Recently, a new study was published in Cancer Discovery, a journal of the American Association for Cancer Research. The research team of Dr. Marios Giannakis, an oncologist at Harvard University Medical School, for the first time linked the characteristics of colorectal mutations with the consumption of processed or red meat, and provided two points. The mechanism link between the authors further clarified the promoting effect of red meat on colorectal cancer. 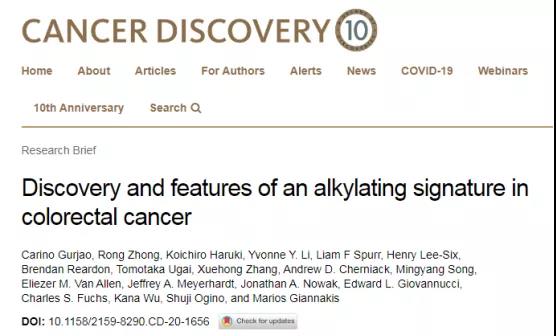 In this study, the research team invited 900 matched colorectal cancer patients to participate, and performed whole-exome DNA sequencing on normal and cancerous colon tissues. At the same time, all patients provided information on diet, lifestyle and other factors in the years before the diagnosis of colorectal cancer.

The results of DNA sequencing data showed that there are some mutational features in both normal and cancerous colon tissues, including a feature that indicates alkylation, which is a form of DNA damage.

The researchers found that these alkylation characteristics were significantly related to the intake of processed or unprocessed red meat before diagnosis, but not to the intake of other foods or other lifestyle factors. 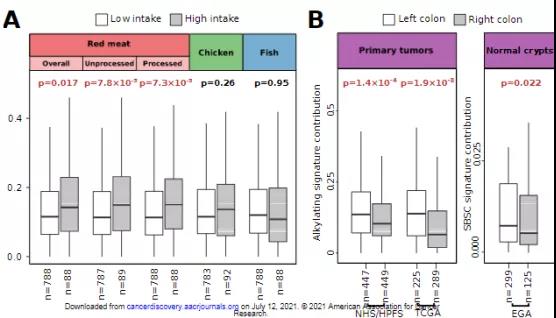 This study found for the first time the characteristics of alkylation mutations in colon cells and linked them to red meat consumption and cancer driver mutations. These findings indicate that eating red meat may cause alkylation damage and induce carcinogenic mutations in KRAS and PIK3CA genes, thereby promoting the development of colorectal cancer.

This study further supports that the consumption of red meat is an important risk factor for colorectal cancer, and it also provides opportunities for the prevention, detection and treatment of this disease.

3. Can you still eat meat well in the future?

So many people may be curious, so many studies have shown that eating red meat has the risk of causing cancer. Can it still be delicious in the future?

In fact, neither the WHO report nor other research results say that red meat should be avoided as much as possible, but it is just a reminder that red meat has a carcinogenic risk to bowel cancer and should be reduced.

Francisco Blanca, director of the Department of Nutrition, Health and Development at the WHO headquarters in Geneva, emphasized that “I did not intend to stop eating these meats, but said that reducing the consumption would reduce the risk of cancer.”

Lean meat is high in protein, such as tenderloin; eat less meat with high fat content, such as pork belly and fat beef, and reduce the intake of saturated fat.

According to the “Chinese Resident Dietary Guidelines (2016)”, the daily intake of livestock and poultry meat is 40 to 75 grams. Eat a little bit of red meat every day, keep it at about 1 tael each time, or eat it 3 to 5 times a week, don’t eat too much at once.

It is best to buy meat and eat it first, and eat fresh. It is best not to freeze for more than 30 days. It should be noted that once frozen meat is thawed, bacteria are more likely to breed than fresh meat, so refrigeration should not be avoided.

Large pieces of meat can be cut into small pieces or shredded and eaten with fresh vegetables, which can not only control meat intake, but also help balance nutrition.