Nitrite is a carcinogen | Why add it to meat products?

Nitrite is a carcinogen | Why add it to meat products? Since sodium nitrite is very carcinogenic, why add this to ham? Why can’t it not be added?

Nitrite is a carcinogen, yes, but it is also a legal food additive that is widely used in meat products.

Because meat products may be infected with botulinum toxin, that stuff is really deadly. So in order to inhibit the growth of botulinum, add some nitrite as a preservative. The amount added is very small.

Tell everyone a common sense of food:

When a food needs preservatives, you must add it, because the consequences of not adding it are often more serious. The two evils are the lesser of power.

Safety is the highest priority attribute in food production. Food safety is above everything, including health and deliciousness.

Safety and health are two different things. Processed red meat products are safe, but it is not a healthy food. You can simply understand that one is short-term poisoning and the other is long-term poisoning.

In addition to antiseptic, sodium nitrite can also be used as a coloring agent to keep red meat products red and more attractive.

Nitrite itself is not actually carcinogenic. The carcinogen is nitrosamine, which is a compound formed by nitrite and protein.

Vitamin C acts as an antioxidant to prevent the formation of nitrosamines from nitrite.

Therefore, many foods with added nitrite will also add vitamin C or its sodium salt at the same time to offset the harm of nitrite. In the ingredient list, it is usually written as “ascorbic acid”, “sodium ascorbate” and “sodium D-isoascorbate”. “

However, there are also some that do not add vitamin C, or because they need to be heated for food, vitamin C will be destroyed when heated, and the effect will not be achieved.

While eating foods containing nitrite, you can match some fresh fruits and vegetables rich in vitamin C, or just take one or two vitamin C supplements.

Because removing nitrite is equivalent to eradicating processed meat directly, it may not be cost-effective.

This time we will focus on answering the latter question, why don’t food companies take human health as the primary consideration?

Can harmful additives not be added?

For example, sodium nitrite in processed red meat is because the pH value of processed meat with a long shelf life is usually above 4.6 (not sour enough), so the risk of botulinum contamination is higher. In order to avoid the terrible eating of one bite Therefore, it can be said that nitrite alone has opened up the world of “processed meat” safe diet.

If there is no nitrite, you can never safely eat luncheon meat, ham, salami, bacon, bacon, and salami. This loss of deliciousness is definitely greater than the loss of pleasure caused by occasionally eating nitrite. After all, if you add nitrite, you can choose to eat less, but if you don’t add nitrite, you won’t dare to eat.

So here is a very serious question:

There are many dimensions of “health”. You think that not adding nitrite is what companies should do, but more people think that companies should provide safe and secure food, and nutrition and health are personal choices. Especially when food actually has an important attribute-pleasure, this problem is even more difficult.

Therefore, for the most basic level of healthy diet, you can’t just look at a certain kind of food, but comprehensively judge the “diet structure” and “diet quality” to judge whether the diet is healthy.

What’s more, to take another dimension to look at the comprehensive healthy life expectancy, it depends on: diet, exercise, mood, and even more virtual and macroscopic things such as the worldview can judge whether it is healthy.

1. Health is multi-dimensional, not strictly based on experimental results to eat the healthiest.

One example is that people who eat and drink most strictly in accordance with evidence may not be the healthiest. Otherwise, shouldn’t the healthiest, long-lived and less sick people be dietitians or medical practitioners? However, the real situation is not like this, so we can’t reject the carcinogenicity of processed meat containing nitrite, but pay attention to the degree of intake.

This is why only the “whole diet structure” can determine whether one is healthy, and not a single food. On a larger level, in order to achieve overall life health, one must balance diet, exercise, mentality and even outlook on life. This further negates the practice of “because nitrite is carcinogenic, completely remove processed meat from the human food list.”

We must know that for many people, the health benefits of the pleasure of eating preserved claypot rice once a month may be the same as the benefits of boiled broccoli chicken breast every day of the week!

Therefore, because nitrite is carcinogenic, processed meat was shot directly from human food. Obviously, it was a small loss.

2. The mechanism of research on carcinogenicity of processed meat: compare the risk calculated by eating the most and least

If you want to know how much processed meat is safe to eat, you have to know how this type of experiment is designed.

Generally speaking, to study the risks of a food and health, a dietary adjustment table is used to investigate the number of people eaten, or the number of servings. And this interval is usually 2-3 days as the unit to count the total, and then divide by the number of days to get the average daily intake.

In most experiments on the relationship between processed meat and health, the risks are as follows: 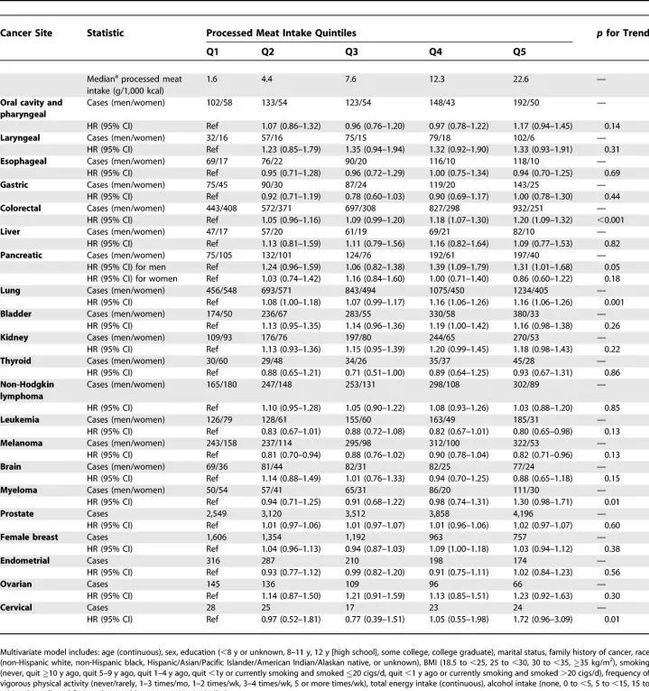 For example, in this experiment, we can see that among many cancers, there is no significant difference between Q1 and Q2, but only with Q5. This means that a lot of data does not support that “eating small amounts of processed meat” will definitely increase the risk of cancer.

Therefore, based on the experimental conclusions, we cannot believe that processed meat, like tobacco and alcohol, has no safe dose. So why smoking and drinking are clearly not supported, but processed meat only promotes “eating less” instead of saying “eating is harmful.”

3. The nutritional source of the population in a few areas is highly dependent on processed meat

This is also a question that nutrition needs to consider-the risks of food and nutrition coexist.

This is why the current large amount of data has also found that red meat intake is linearly related to the risk of colon cancer [1], but the “no red meat” is still not directly included in the dietary guidelines, which takes into account the unique health benefits of red meat. It is very meaningful for some people (such as people who are prone to iron deficiency, pregnant women, and children).

Taking a step back, processed meat is a first-class carcinogen, it is also meat. People in many areas do not eat enough meat or even protein. So for these people, should they risk malnutrition to prevent them from eating processed meat, or give them processed meat so that they risk a certain degree of cancer?

Therefore, in summary, why it is impossible not to add nitrite or to order the prohibition of processed meat is because:

Processed meat does not mean that you can’t eat it at all, the experimental data supports “eating as little or not as much as possible”

The relationship between food and health must be considered comprehensively, including pleasure.

Reference: Nitrite is a carcinogen | Why add it to meat products?

Nitrite is a carcinogen | Why add it to meat products?