Imported Cherry Tested Positive on COVID-19 in China. Will cherries infect people if they test positive?

The  nucleic acid test on the inner surface of imported cherries in Wuxi, Jiangsu Province was positive. 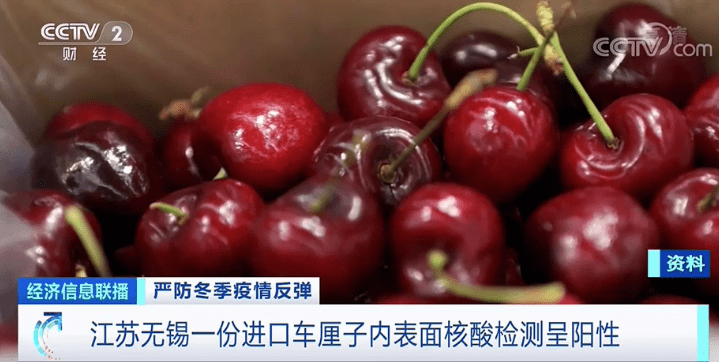 After investigation, the batch of food basically flowed to Liangxi District, Huishan District and Binhu District in Jiangsu, China. Local measures such as epidemiological investigations, nucleic acid sampling, centralized isolation of close contacts, storage of surplus food, and comprehensive environmental destruction have been implemented quickly. At present, a total of 199 environmental, object, and personnel specimens have been collected in Liangxi District, Huishan District, and Binhu District, and the test results are all negative.

The nucleic acid test is positive. Can imported cherries be eaten without “worry”?

As soon as the news came out, many consumers began to worry, can imported cherries be eaten with confidence? What does it mean that imported cherries test positive for nucleic acid? In this regard, Feng Zijian, deputy director of the China Centers for Disease Control and Prevention, said that although many imported goods show positive in nucleic acid tests, a positive nucleic acid does not necessarily mean that they are infectious.

Feng Zijian, deputy director of the Chinese Center for Disease Control and Prevention: A positive nucleic acid does not mean that it must be infectious. It depends on the amount of contamination and whether the contaminated virus is active. From what we know, the nucleic acid detected in this imported cherries in Wuxi is positive, and the virus load is very low, which will not pose too much risk of infection to consumers.

Up to now, although we continue to find that various imported goods have been tested positive, we have not found that ordinary consumers have been infected by the virus contaminated by such imported goods.

Feng Zijian said that in the past, people engaged in food processing or handling work were infected because they were exposed to the virus for a long time and frequently. For consumers, imported fruits generally do not cause infection and can be eaten safely after washing. Generally, no special treatment is required, just rinse with clean water. There is also hand hygiene. Wash your hands promptly after touching objects. Do not touch your eyes, nose, and mouth with dirty hands.

Experts say that compared with cold-chain foods, fruits are stored at a higher temperature, and the virus will not survive on the surface of the fruit for too long. However, due to the low temperature in winter, the survival time of the virus on the surface of containers and containers will be prolonged. Therefore, it is necessary to wash hands frequently to prevent the virus from spreading through contact with outer packaging.