The sleep signal from the body is actually an “alert” of brain DNA damage.

Why do you always feel sleepy when you are tired? New research has found that the sleep signal sent by the body is actually an “alert” sounded by brain DNA damage.

Sleep is essential for all animals, but the amount of sleep per day varies from species to species.

For humans, one-third of our life needs to be spent sleeping. When we are exhausted, as long as we sleep well, we can start a new day full of energy.

So, how do we know that we need to sleep, and what is the mechanism of sleep at night to help the body repair? These are still unsolved mysteries.

The Lior app elbaum team from the Faculty of Life Sciences and Multidisciplinary Brain Research Center of Bar-Ilan University in Israel published a new study titled Parp1 promotes sleep, which enhances DNA repair in neurons in Molecular Cell magazine, which aims to unlock this The mystery took a step forward.

Researchers discovered the sleep mechanism of zebrafish and obtained evidence support in mice, and found that DNA damage is the steady-state driver of sleep, and the Parp1 pathway can sense this cellular pressure and promote sleep and repair activities. 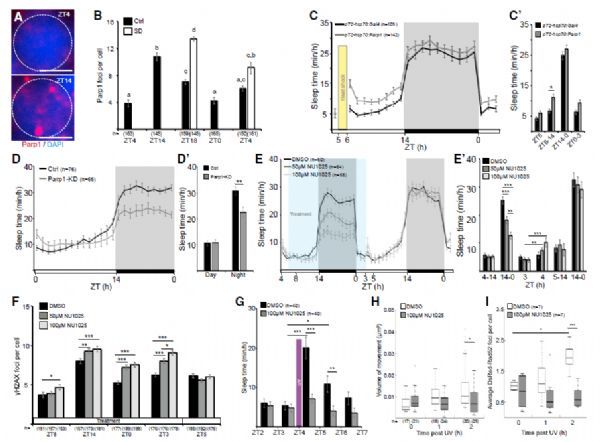 When we are awake, DNA damage gradually accumulates in neurons. This damage can be caused by a variety of factors, including ultraviolet light, neuronal activity, radiation, oxidative stress, and enzymatic reaction errors. During sleep and waking hours, the repair system in each cell corrects DNA breaks.

However, DNA damage in neurons continues to accumulate during the waking period, and excessive DNA damage in the brain can reach dangerous levels, so DNA damage must be reduced. This study shows that sleep can recruit DNA repair systems and promote effective repair to help us “restart” a new day.

In a series of experiments, the researchers tried to determine whether the accumulation of DNA damage might be a driving factor in triggering sleep states.

The use of radiation, and an optical pharmacological genetic variety of learning experimental methods , induce DNA damage in zebrafish, to assess how they affect sleep zebrafish.

The zebrafish is very transparent, has a brain and night sleep similar to humans, and is a perfect model organism for studying this phenomenon.

Experiments have shown that as DNA damage increases, so does the need for sleep.

At a certain moment, the accumulation of DNA damage reaches the maximum threshold, and the sleep (homeostatic) pressure increases to a certain level, so that the sleep impulse is triggered, and the fish enters a sleep state.

How many hours of sleep is enough?

Nothing is more important than a good night’s sleep. After confirming that accumulated DNA damage is a factor driving the sleep process, the researchers further determined the shortest time to reduce sleep stress and DNA damage in zebrafish.

Like humans, zebrafish are very sensitive to interruptions in light, so researchers gradually reduce the amount of darkness at night. After testing DNA damage and sleep, it was determined that 6 hours of sleep each night is sufficient to reduce DNA damage.

The shocking thing is that when there is less than 6 hours of sleep at night, DNA damage is not fully reduced, and zebrafish will continue to sleep during the day.

In order to promote effective DNA repair, the brain needs to tell us that it is time to sleep. What is the underlying mechanism?

The PARP1 protein is part of the DNA damage repair system and is one of the first proteins to respond quickly. PARP1 marks DNA damage sites in cells and recruits all relevant systems to eliminate DNA damage.

Through genetic and pharmacological manipulation, the overexpression and knockdown of PARP1 indicate that increasing PARP1 can not only promote sleep, but also increase sleep-dependent repair.

In order to further confirm the results of the study on zebrafish, the researchers collaborated with Professor Yuval Nir of Tel Aviv University and used EEG to detect the role of PARP1 in regulating sleep in mice. As with the results obtained on zebrafish, inhibition of PARP1 activity reduced the duration and quality of non-REM sleep. Professor app elbaum said, “In order to perform DNA repair, the PARP1 pathway can send a signal to the brain to let us know that we need to sleep.”

In this study, it was revealed that DNA damage is the steady-state driver of sleep, and the PARP1 pathway can sense this cell pressure, remind us that we can sleep, and perform DNA repair during sleep.

During sleep, the DNA repair system repairs the rest time and makes the day start again. Red is the cell body, blue is the nucleolus, and green is the site of DNA damage. (Credit by Dr. David Zada)

These latest findings describe in detail the “generating chain” of sleep at the single-cell level. This mechanism can also be used to explain sleep disorders, aging, and neurodegenerative diseases (such as Parkinson’s and Alzheimer’s). Between the links.

Although the current research is still at the stage of zebrafish and mouse models, Professor App elbaum believes that “future research will help to apply this sleep function from lower invertebrates to humans.”