According to statistics from the World Health Organization, the global sleep disorder rate is close to 30%. In China, the incidence of insomnia among adults is close to 40%, and more than 60% of people born in the 90s feel sleep deprived. This means that more than 300 million people in the country have sleep disorders, and this number is still rising year by year.

Experimental studies have shown that there is a causal relationship between complete sleep deprivation (not going to bed all night) and poor performance the next day. However, researchers still don’t know much about whether the naturally occurring lack of continuous sleep affects the consequences of daily physical and mental health.

On July 6, 2021, Dr. Soomi Lee from the Institute of Aging of the University of South Florida published a titled “Naturally Occurring Consecutive Sleep Loss and Day-to-Day Trajectories of Affective and Physical Well-Being” in the journal Annals of Behavioral Medicine. Research papers.

The research team studied the consequences of participants sleeping less than 6 hours for multiple consecutive nights. The results of the study show that only three consecutive nights of sleep deprivation is enough to cause a serious deterioration in a person’s mental and physical health. This study provides for the first time evidence that lack of sleep for multiple consecutive days predicts the deterioration of the daily emotional and physical health trajectory of adults.

As we all know, lack of sleep can have a negative impact on daily life. For example, previous studies have shown that among middle-aged people, people who sleep shorter than their average level are associated with higher negative emotions, lower positive emotions, more socio-psychological pressure, more cognitive disturbances, and first Two days lower concentration is related.

In this study, Soomi Lee investigated the data of 1958 relatively healthy and well-educated middle-aged participants in the American middle-aged study. They all participated in an 8-day American daily experience study. Participants answered a series of questions related to the previous night’s sleep time and daily well-being. Among them, 42% of people did not get enough sleep for at least one night, one and a half hours less than their usual sleep time.

Participants were also asked to report the occurrence of 28 physical symptoms, including upper respiratory symptoms (such as sore throat, runny nose), pain (such as headache, muscle aches, back pain), gastrointestinal symptoms (such as stomach problems, diarrhea), and Other symptoms. And, on the days of the onset of symptoms, they also reported the severity of the symptoms. 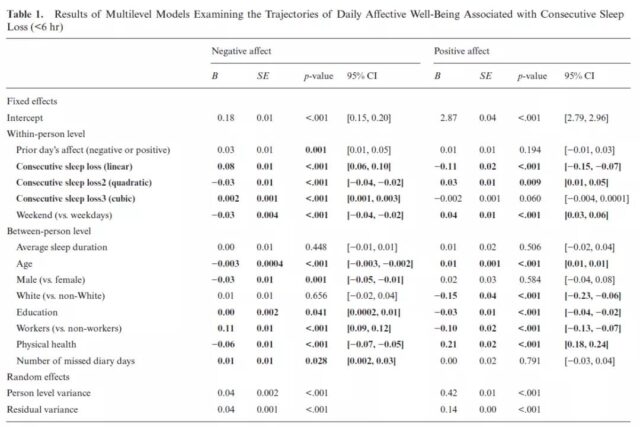 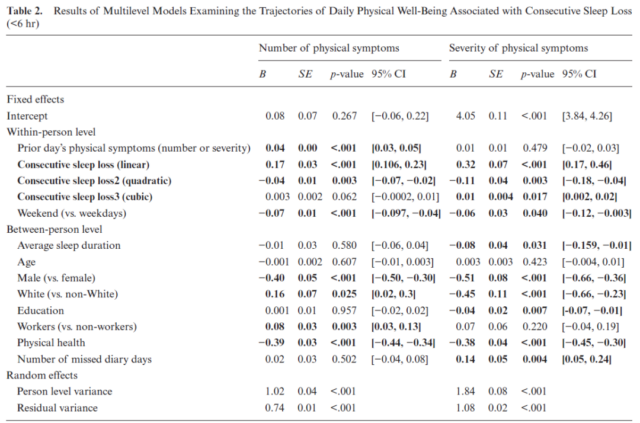 Due to lack of sleep, participants felt negative emotions such as anger, nervousness, loneliness, irritability, and depression. They also experienced more physical symptoms, such as upper respiratory tract problems, pain, gastrointestinal problems and other health problems. These negative emotions and symptoms continue to rise during consecutive days of sleep deprivation, and unless they sleep more than six hours at night, they cannot return to baseline levels. 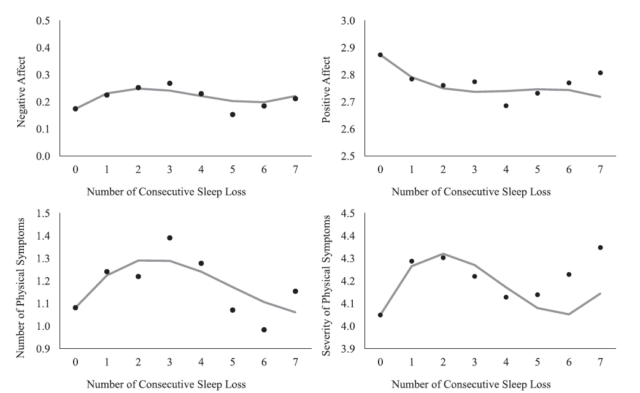 Soomi Lee also said that many people think that if you don’t get enough sleep, you can make up on the weekend to be more efficient in the next week’s workday. However, the results of this study show that just one night’s lack of sleep can damage your health.

This study shows that the increase in the number of consecutive insomnia (less than 6 hours) is related to the deteriorating trajectory of the individual’s daily emotional and physical health; moreover, due to the limited recovery of mental and physical load and the wear and tear of the body system, continuous lack of sleep may also be It is related to declining daily well-being. Sleep has an important homeostasis function, and it cannot support homeostasis and effective management of the body system in the case of insufficient sleep. Therefore, for most people, less than 6 hours of continuous sleep may increase physical burden and interfere with optimal function and health.

Soomi Lee explained: “Once lack of sleep becomes a habit, it becomes increasingly difficult for your body to fully recover from lack of sleep. This will worsen your daily health and fall into a vicious circle, which may also affect a person’s career. Slightly. Insufficient sleep will reduce daily concentration, and concentration is a key means to manage stress and maintain healthy living habits.”