WHO: Working more than 55 hours per week is a serious health hazard

With the acceleration of the pace of life in modern society, the pressure of life, study and work is increasing, and the involution is becoming more and more serious. The 40-hour normal working time has almost become a luxury. Working overtime is commonplace for many people. In recent years, some domestic Internet companies have even regarded overtime as a culture, and 996 has even been described as a kind of “blessing”.

On May 17, 2021, the World Health Organization (WHO) and the International Labor Organization (ILO) published a research paper titled: “Global, regional, and national burdens of ischemic heart disease and stroke attributable to exposure to long working hours for 194 countries, 2000–2016: A systematic analysis from the WHO/ILO Joint Estimates of the Work-related Burden of Disease and Injury”.

This is the world’s first survey report on the health effects of long-term work teams. The study provides sufficient evidence that people who work more than 55 hours a week suffer from heart disease compared with the normal working hours of 35-40 hours a week. The risk of illness and stroke is higher.

For the majority of 996 workers, the working week is 72 hours, which is 17 hours longer than the long-term work referred to by the WHO. Therefore, what netizens say 996=ICU is not only a sad sentence. Self-deprecating, but becoming a helpless reality.

The World Health Organization (WHO) and the International Labour Organization (ILO) organized a team of experts to examine the working hours of 194 countries/regions and the ischemia by gender and age in 183 countries/regions in 2000, 2010 and 2016. A comparative analysis of the attributable burden of sexual heart disease and stroke. 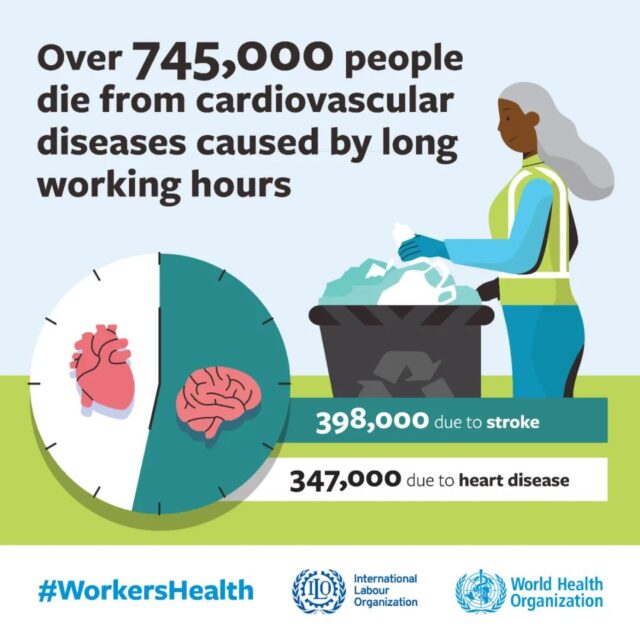 The most serious situation in these regions and countries

In 2016, Southeast Asia had the highest proportion of people working 55 hours or more a week at 11.7%, followed by Africa and the Eastern Mediterranean at 11.4%, and Europe had the lowest at 3.5%.

Over time, from 2000 to 2016, the proportion of workers working 55 hours or more per week increased the most in the Western Pacific region, while Africa experienced the largest decrease.

Among all regions in 2016, Southeast Asia was the most serious, with the highest number of deaths from ischemic heart disease and stroke due to long working hours, both at 160,000, with the largest increase, while Europe had the lowest.

Specific to the country, Egypt, Lebanon, and Ukraine have the highest heart disease death rates due to long hours of work, with approximately 15 deaths per 100,000 people. France, Rwanda and Kenya are the lowest, with less than 1 case per 100,000 people.

North Korea is the country with the highest stroke mortality rate due to long hours of work, with 28.1 deaths per 100,000 people. Countries such as France, Norway, and Switzerland are the lowest, with less than 1 case per 100,000 people. 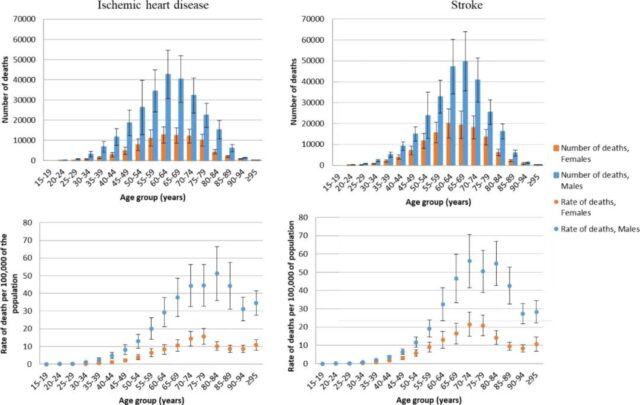 In the disease burden of ischemic heart disease and stroke caused by long working hours, the burden of men is greater than that of women, and the number of related deaths and mortality increases with age. Whether from the perspective of absolute death toll or relative mortality, men and the elderly (60-74 years old) bear a greater burden of ischemic heart disease and stroke due to long hours of work.

Why does long working hours cause heart disease and stroke?

Studies have shown that working long hours may lead to heart disease and stroke through two main “paths”, which can lead to death.

The first way: the physiological response caused by stress. Working for a long time will continue to activate the autonomic nervous system and the immune system, which will cause related stress responses and release excessive stress hormones (such as epinephrine, norepinephrine and Cortisol). This triggers a response in the cardiovascular system and causes tissue disease.

The first way: the behavioral way of coping with stress. Many people cope with the pressure of working for a long time and will choose some harmful coping styles, including smoking, drinking, unhealthy diet, lack of exercise, lack of sleep, etc. These are all ischemia Known risk factors for sexual heart disease and stroke.

According to this large-scale survey and research, the World Health Organization (WHO) and the International Labour Organization (ILO) estimate that long hours of work (≥55 hours/week) are very common worldwide, accounting for about the world’s labor force. 9%, however, long hours of work can lead to a huge burden of ischemic heart disease and stroke. In order to protect people’s health and spiritual safety, the government, employers, and workers should work together to adopt better ways to reduce long-term work patterns that can seriously harm health.