Less than 6 hours of sleep for three consecutive days is enough to cause serious harm to the body and spirit.

In today’s society, staying up late has become the “new normal” for many young people. Do you also play with your cell phone bored in the early hours of a certain night, regretting that you shouldn’t have milk tea or supper just now, and feeling that it’s another day of insomnia? ? Staying up late is also very harmful. Although many people know that staying up late is not good, they cannot change this bad habit.

According to statistics from the World Health Organization (WHO), the global sleep disorder rate is 27%, while in China, the adult insomnia rate is as high as 38.2%, and more than 60% of post-90s feel sleep deprived, that is to say, there are more than 300 million Chinese There are sleep disorders, and this data is still rising year by year.

In July 2021, Assistant Professor Soomi Lee of the University of South Florida published a paper entitled: Naturally Occurring Consecutive Sleep Loss and Day-to-Day Trajectories of Affective and Physical Well-Being in the journal Annals of Behavioral Medicine.

The study shows that 6 hours of sleep per night is the shortest sleep time to maintain the best health of ordinary adults. Only three consecutive nights sleep less than 6 hours, it is enough to cause a great deterioration of physical and mental health.

Previous studies have shown that lack of sleep can impair performance, mood and energy the next day. However, little is known about the impact of continuous lack of sleep on daily health.

Participants also answered a series of questions related to the previous night’s sleep time and daily well-being. Among them, 42% of people did not get enough sleep for at least one night, slept 1.5 hours less than usual.

Participants were also asked to report the occurrence and severity of 28 physical symptoms, including upper respiratory symptoms (such as sore throat, runny nose), pain (such as headache, muscle aches, back pain), gastrointestinal symptoms (such as stomach problems, diarrhea) )and many more.

Participants reported that due to lack of sleep, they felt angry, nervous, lonely, irritable, and depressed. They also experienced more physical symptoms, such as upper respiratory tract problems, pain, gastrointestinal problems and other health problems. These negative emotions and symptoms continue to rise during consecutive sleep deprivation days, and unless they sleep more than six hours at night, they will not return to baseline levels.

Using these data, Soomi Lee found that these symptoms experienced the greatest increase after only one night of sleep deprivation. With continuous lack of sleep, mental and physical problems continue to worsen, and the number of these worsening peaks on the third day. After that, the human body became relatively accustomed to repeated insomnia, but on the sixth day it changed, and the severity of the physical symptoms reported by the participants reached its peak. 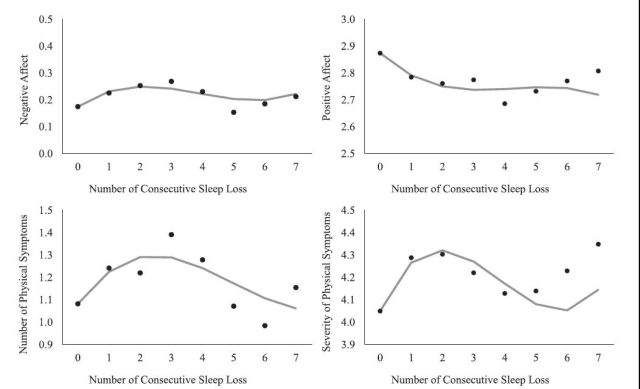 More than one-third of adults sleep less than 6 hours a night. Once this situation becomes a habit, it will become more and more difficult for your body to fully recover from lack of sleep, leading to a vicious circle that affects your physical and mental health and working status. Prior to this, a study led by Soomi Lee also found that only 16 minutes of sleep a day would affect work efficiency.

There are many people who think that even if you don’t get enough sleep, you can make up for the lack of sleep as long as you sleep more on weekends.

Therefore, the best way to ensure daily energy and physical and mental health may be to ensure at least 6 hours of sleep every night.