Sleep disturbance is a common non-motor feature in patients with Parkinson’s disease. Early diagnosis and proper management are essential to improve the quality of life of patients.

In addition to age-related sleep changes, sleep disorders may also be caused by a variety of factors, such as nocturnal motor symptoms (stiffness, resting tremor, dyskinesia, tardive dyskinesia and “fatigue” phenomenon), non-motor symptoms ( Pain, hallucinations and psychosis), nocturia and medication.

Disease-related pathology involving the brainstem and changes in the neurotransmitter system (norepinephrine, serotonin, and acetylcholine) responsible for regulating sleep structure and sleep/wake cycle play a role in the occurrence of excessive daytime sleepiness and sleep disorders.

The use of Parkinson’s Disease Sleep Scale-2 to conduct a questionnaire assessment is helpful for screening Parkinson’s disease-related nocturnal symptoms. In this review, we will focus on the current understanding and management of sleep disorders in Parkinson’s disease.

Many factors and conditions related to Parkinson’s disease are related to sleep disorders in patients with Parkinson’s disease (Table 1). Disease-related pathological changes include impaired thalamic cortex wakefulness and degeneration of the brainstem regulation center used to maintain sleep/wakefulness and rapid eye movement sleep, leading to excessive daytime sleepiness and insomnia. 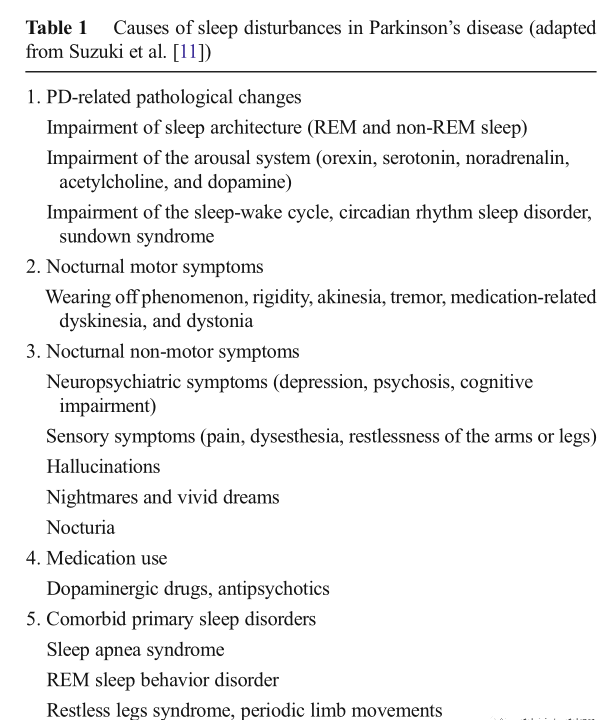 In contrast, nighttime psychiatric symptoms, including hallucinations and psychosis, can be effectively treated by reducing the dose of dopamine before going to bed or adding antipsychotic drugs. Table 2 shows the treatment methods for sleep disorders in Parkinson’s disease patients. 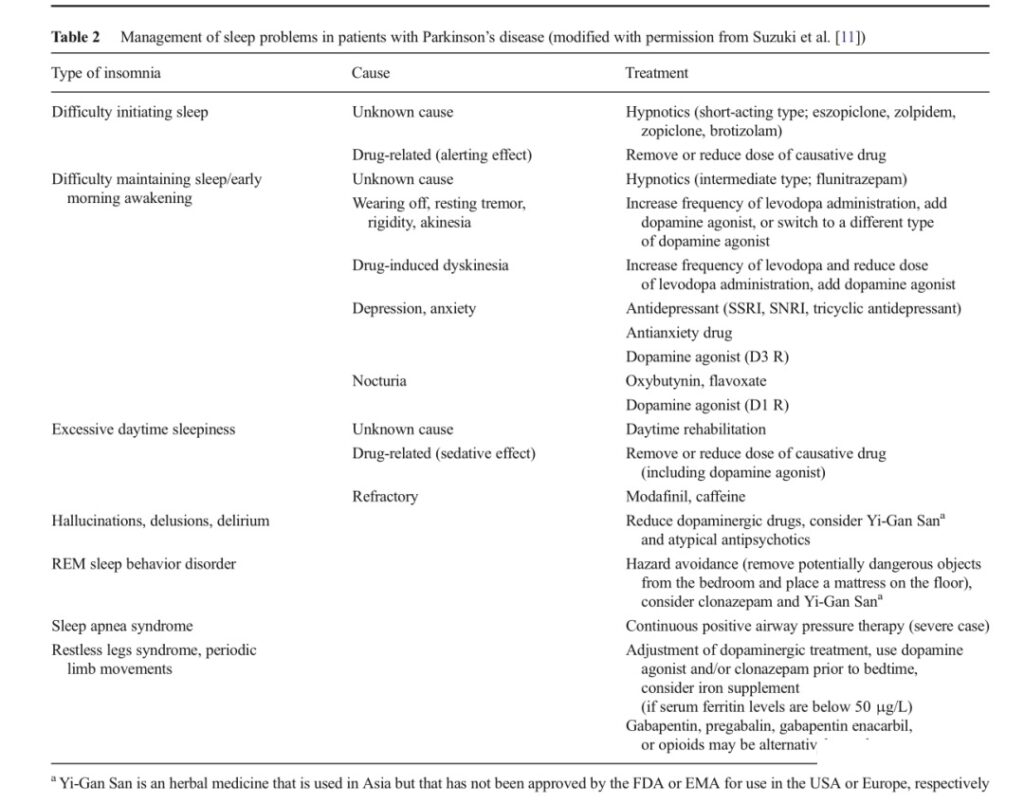 Sleep disorders in patients with Parkinson’s disease and its relationship with the course of the disease: In patients with Parkinson’s disease, in the presence of various nocturnal motion and non-motor problems and disease-related changes in sleep structure, the estimated total sleep time and sleep efficiency Will decrease, the first and second stages of sleep will increase, and slow wave sleep will decrease.

In Parkinson’s disease patients, it has been observed that hypothalamic orexin levels and loss of orexin neurons are associated with disease progression. Clinically, all dopaminergic drugs have a sedative effect on patients with Parkinson’s disease.

According to reports, 3.8% to 22.8% of Parkinson’s disease patients have sudden sleep incidents while driving. In patients with higher ESS scores (≥10), the frequency of sudden sleep episodes increases [25, 27]; therefore, it is important to screen for sleep sudden events in patients with sleep disorders.

However, people should be aware that patients sometimes fail to recognize sudden sleep events.

01 Idiopathic RBD disease and Parkinson’s disease-related diseases are characterized by the loss of normal muscle weakness during rapid eye movement sleep and dreaming behavior. Clinical manifestations include vocalization, such as speaking and shouting, violent, aggressive and complex behaviors during REM sleep, and vivid, unpleasant, and violent dreams that can cause sleep-related harm to the patient or bed partner. There is a link between RBD disease and neurodegenerative diseases.

In a clinicopathological study of 172 patients with or without neurological diseases, the neuropathological diagnosis was Lewy body disease (n=77), Lewy body disease and AD combined (n=59), MSA (n=19), AD (n=6), progressive supranuclear palsy (n=2), and others (n=9), indicating that RBD patients (n=170) associated with neurodegenerative diseases (n=170) [50 ], the proportion of synucleinopathy is higher (94%).

In summary, these longitudinal studies show that idiopathic RBD has a huge risk of synucleinopathy, especially Lewy body-related diseases, such as Parkinson’s disease and DLB disease. The lack of RBD is associated with Alzheimer’s disease-like atrophy patterns on magnetic resonance imaging and increased phosphate tau load.

The involvement of cholinergic and monoaminergic brainstem nuclei, including the pontine nucleus, dorsal tegmental nucleus, dorsal inferior nucleus, and locus coeruleus, and neuronal networks involving the limbic system and neocortex are believed to contribute to RBD The occurrence of the disease.

Patients with RBD can recall the content of their dreams when they woke up when the abnormal behavior occurred, although the details may be forgotten at noon the next day. It is also worth noting that in patients with severe sleep apnea syndrome, apnea-induced arousal can mimic the symptoms of RBD.

In a follow-up positron emission tomography study of an idiopathic RBD patient, except for a slight decrease in the left posterior putamen 1 year after the onset of RBD symptoms, the substantia nigra striatum presynaptic dopaminergic function was almost normal, but in 3.5 years after the onset of RBD, the annual reduction is 4-6%.

RLS is a sensory motor disorder characterized by unpleasant sensations in the legs. The four basic criteria include the urge to move the legs, the onset or worsening of symptoms during rest or inactivity, relief through exercise, and predominantly occurring at night or night rather than during the day. In addition, the impact of RLS on daytime functions and sleep problems has been added to the latest ICSD-3.

However, these recurrent laryngeal nervous system standards are applicable to the general population, and there are currently no recurrent laryngeal nervous system standards for patients with Parkinson’s disease. Due to the dopaminergic dysfunction observed in the two diseases and the good response to dopaminergic drugs, the age of onset of Parkinson’s disease in both old and young is associated with RLS comorbidities.

Two studies found that the prevalence of the recurrent laryngeal nervous system in patients with Parkinson’s disease did not increase significantly.

Sleep apnea synthesis Compared with the non-snoring control group, habitual snorers with an apnea-hypopnea index (AHI) less than 5 have more frequent daytime sleepiness. Among subjects with an AHI index ≥5, 22.6% were women and 15.5% were women. Of men report frequent drowsiness. In patients with Parkinson’s disease, upper airway dysfunction associated with Parkinson’s syndrome during sleep may lead to snoring and obstructive sleep apnea (OSA).

Compared with the OSA control group, mild nocturnal desaturation was observed in OSA patients, and the sympathetic response to OSA was slow; this may indicate that these autonomic disorders can protect Parkinson’s disease patients from cardiovascular disease. The severity of the disease is not generally related to the severity of OSA.