Why does bile reflux get worse and develop into gastric cancer?

What is bile reflux gastritis 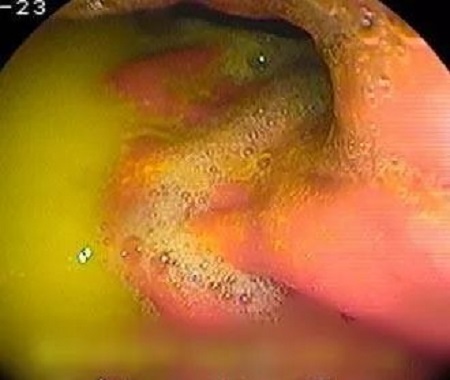 The mechanism of action is:

Bile acid can dissolve the mucus in the stomach and destroy the mucosal surface; bile can activate lecithinase a. Change lecithin into lysolecithin and destroy cell membranes. When the alkaline duodenal juice neutralizes the acidic gastric juice and the pH is close to neutral, pancreatin is activated, causing mucosal damage.

After partial gastrectomy and cholecystectomy, most patients have bile reflux.

In some patients who have undergone gastrectomy and gastrojejunostomy, patients with pyloric dysfunction and chronic biliary diseases, bile can flow directly back into the stomach, and it is also easy to cause bile reflux gastritis.

2. Eating too fast or too full

Since the speed of gastrointestinal emptying is relatively fixed, when eating too fast or eating too much, food cannot enter the intestine smoothly, and bile reflux can also be induced.

5. The mechanism of duodenal gastrointestinal reflux

Bile acid is the main component of the mucosal damage caused by duodenal reflux fluid, which has a significant damaging effect on the mucosal barrier. In an acidic environment, the invasiveness of juice acid on the gastric mucosa is enhanced, and its combined action with digestive enzymes and other components can cause changes in mucosal cells and tissue structure, weaken the various protective mechanisms of the gastric mucosa, and promote the action of other damage factors such as gastric acid And the role of Helicobacter pylori.

For example, primary pyloric sphincter dysfunction can prolong the open time of the pylorus, relax the pylorus or keep it open, causing the contents of the duodenum to flow back into the stomach, causing duodenal gastrointestinal reflux; such as gastrointestinal neuropeptides and Abnormal levels of hormones can cause disturbances in gastrointestinal motility and lead to duodenogastric reflux.

What are the symptoms of bile reflux gastritis?

The main clinical symptoms of bile reflux gastritis are as follows:

A small number of patients may present as pain behind the sternum, or a feeling of indigestion in the stomach. Bile vomiting is its characteristic performance. Due to gastric emptying disorder, vomiting usually occurs in the evening or midnight. The vomit may be accompanied by food and occasionally a small amount of blood. Because of fear of worsening symptoms after eating, patients reduce their food intake, which can lead to symptoms such as anemia, weight loss, malnutrition, and diarrhea.

What are the effects of bile reflux on human health?

Bile reflux may cause cancer!

The possible carcinogenic mechanisms of bile reflux are as follows:

1. The direct damage effect of bile on gastric mucosa.

During bile reflux, secondary bile acids and free bile acids flow back into the stomach, which can destroy the lipoprotein layer of gastric epithelial cells, thereby destroying the gastric mucosal barrier.

2. Bile reflux provides conditions for other factors to damage the gastric mucosa.

Studies believe that after bile flows back into the stomach, soluble bile acids enter mucosal cells in a non-ionized lipophilic state, and can accumulate up to 8 times the luminal concentration, causing damage to the cell membrane and its tight junctions.

Therefore, the reflux of duodenal contents such as bile participates in chronic gastric mucosal injury.

3. Bile reflux after gastrectomy can destroy the mucosal barrier of the remnant stomach.

The destruction of gastric mucosal barrier by bile acids and bile salts is also one of the most important mechanisms for the occurrence of gastric ulcer. Studies believe that the damage of bile reflux to gastric mucosa is mainly manifested as active inflammation, intestinal metaplasia, gland atrophy and localized hyperplasia, while chronic atrophic gastritis, gastric mucosal dysplasia or intestinal epithelial metaplasia, gastric glands Cystic dilation, etc. are considered to be pre-cancerous lesions of the stomach.

4. Bile reflux leads to an increased risk of gastric cancer.

The remnant stomach after distal gastric surgery is now considered a precancerous lesion of gastric cancer. The mechanism of remnant gastric cancer may be related to the following factors:

(1) After partial gastrectomy, the normal physiological anatomical relationship of the gastrointestinal tract is changed, leading to major pathophysiological changes in the gastric mucosa, which is an important pathological basis for the occurrence of remnant gastric cancer. Mainly after partial gastrectomy, the normal pyloric function is lost, and a large amount of bile and pancreatic juice flows back into the remnant stomach, causing strong stimulation and damage to the gastric mucosa.

(2) After gastrectomy, the mucosal barrier function of the remnant stomach is damaged. Due to the removal of the pylorus and gastric antrum, the lack of G cells to secrete gastrin, gastric mucus secretion decreases, glands atrophy, and the remnant stomach is in a low or acid-free state, so alkaline reflux fluids such as bile are more likely to damage the gastric mucosa, especially It is the defatted lecithin in the bile that has a strong damaging effect on the gastric mucosal barrier mechanism.

(3) Bile reflux leads to long-term low acidity in the stomach, which is conducive to bacterial reproduction, especially the increase of bacteria with nitrate reductase and the increase of carcinogens-nitrosamines, which may also increase the chance of remnant gastric cancer.