Harmfulness of gastric ulcer. Peptic ulcer is a common gastrointestinal disease, mainly divided into gastric ulcer and duodenal ulcer. It usually occurs in the esophagus, stomach or duodenum.

Peptic ulcer is a common gastrointestinal disease, mainly divided into gastric ulcer and duodenal ulcer. It usually occurs in the esophagus, stomach or duodenum. Gastric ulcer and duodenal ulcer are formed by gastric acid and pepsin digesting the mucosa itself. Gastric acid and pepsin are only one of the main reasons for the formation of ulcers, and other reasons can form peptic ulcers. 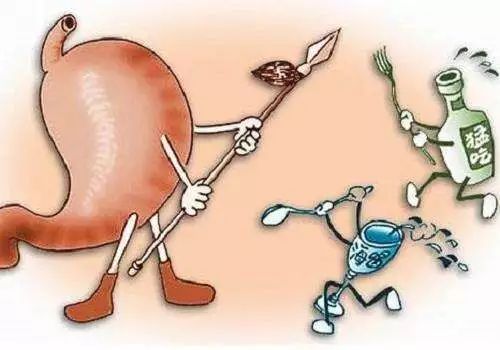 What are the causes of gastric ulcer or duodenal ulcer:

Helicobacter pylori reaches the gastric mucosa by mouth and colonizes the infection. It causes chronic and superficial gastritis over several weeks or months, and later develops into duodenal ulcer and gastric ulcer.

2. Taking medicine to cause peptic ulcer

On the one hand, the formation of peptic ulcer is caused by excessive gastric acid/pepsin secretion and digestion by the stomach itself.

4. Acute stress can cause stress ulcer

Some patients with gastric ulcer have gastric dyskinesia, such as increased gastric acid secretion due to delayed gastric emptying and damage to the gastric mucosa caused by bile, pancreatic juice and lysolecithin due to duodenal-gastric reflux.

The clinical manifestations of peptic ulcer Pain in the upper abdomen is the main symptom of this disease. It is mostly located in the upper abdomen, but also in the upper left abdomen or behind the sternum and xiphoid process. Often presents dull pain, dull pain, swelling pain, burning pain. The pain of gastric ulcer usually occurs within 1 hour after a meal, and gradually relieves after 1 to 2 hours, until the above rhythm is reproduced after the next meal. Some patients may be asymptomatic or have complications such as bleeding and perforation as the main cause.

Gastric ulcer can worsen and cause what symptoms:

According to statistics, ulcers account for about 50% of the various causes of upper gastrointestinal bleeding, ranking first. . Gastric ulcer bleeding is more than duodenal ulcer. Bleeding easily occurs within 1 to 2 years after the appearance of peptic ulcer.

Peptic ulcer perforation can be divided into acute, subacute and chronic clinically. The incidence of duodenal ulcer is higher than that of gastric ulcer.

Approximately 10% of patients with peptic ulcer may have pyloric obstruction, most of which occur in duodenal ulcer, followed by pyloric duct or pre-pyloric ulcer.

If you have gastrointestinal discomfort symptoms such as “stomach pain, bloating, acid reflux, heartburn, bitter mouth, bad breath, belching, diarrhea”, you should perform a gastrointestinal examination in time for early detection, early diagnosis and early treatment.