JAMA: Staying in space for a long time can cause brain damage

JAMA Sub-Journal: Staying in space for a long time can cause brain damage.

As we all know, staying in space for a long time will have adverse effects on the astronaut’s body, including muscle atrophy, osteoporosis, decreased vision, and changes in intestinal flora.

Recently, researchers from the University of Munich in Germany, the University of Gothenburg in Sweden and the Russian Academy of Sciences published a research paper titled: Changes in Blood Biomarkers of Brain Injury and Degeneration Following Long-Duration Spaceflight in JAMA Neurology, a sub-journal of JAMA.

The research team tracked and studied five Russian male astronauts working on the International Space Station 400 kilometers from the surface of the Earth. Through blood tests, they found their neurofilament (NfL), glial fibrillary acidic protein (GFAP), and amyloid. The concentration of protein Aβ40 has increased significantly, which indicates that long-term stay in space may cause damage to the human brain.

The research team collected blood samples 20 days before the five astronauts went to the International Space Station. The five astronauts spent an average of 169 days (about five and a half months) on the space station, and their average age was 49 years.

After they returned to Earth, follow-up blood samples were collected one day, one week, and about three weeks after landing. Used to analyze 5 kinds of biomarkers of brain damage. They are: neurofilament (NfL), glial fibrillary acidic protein (GFAP), total tau protein (T-tau) and amyloid Aβ40, Aβ42.

For three of the brain injury biomarkers-NfL, GFAP and Aβ40, the concentration increased significantly during their stay on the space station.

After the astronauts returned to Earth, these brain damage markers did not change synchronously, but over time, the general trend was consistent. It is understood that this is the first time that specific evidence of brain cell damage has been recorded in a blood test after a space flight. 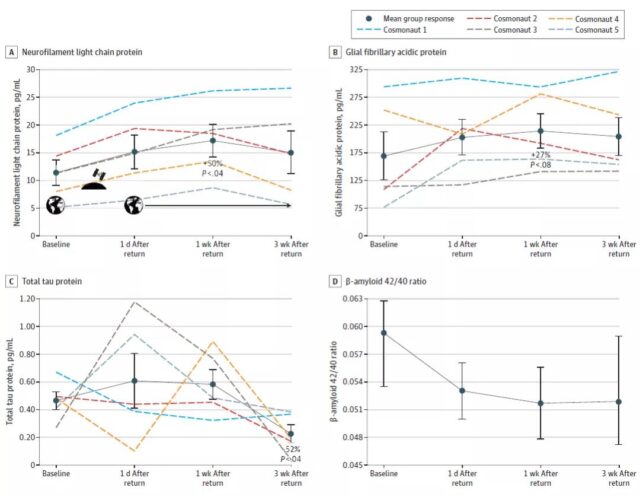 Why does a long stay in space cause these signs of brain damage related to weightlessness, brain fluid changes, and overweight stress related to launch and landing? Or some other unknown reason? There is still no definite answer.

These changes may be related to brain function, as evidenced by the changes observed in the brain magnetic resonance imaging (MRI) of these astronauts after returning to Earth. However, due to the small scale of the study, with only 5 astronauts, it is impossible to further explore the specific relationship between this change and brain function.

In recent decades, mankind’s ability to explore space has progressed rapidly, and civil aerospace companies such as Space X and Blue Origin have also begun to send mankind to space. Perhaps in the not-too-distant future, space travel will become more common, which requires us to further explore the reasons for the signs of brain damage in space and further prevent this situation from occurring.

JAMA: Staying in space for a long time can cause brain damage