Snoring is a relatively common phenomenon in life, and we or our relatives may also have such troubles. But everyone didn’t think it was a disease, but just thought it was a bad sleep habit.

But in fact, snoring is caused by some abnormalities of the body. It is a disease that should not be ignored. The clinical professional name is obstructive sleep apnea syndrome (OSAS). OSAS is the apnea and hypoventilation caused by the blockage or narrowing of the upper airway during sleep, which causes symptoms such as night snoring, apnea, abnormal sleep structure, etc., which causes repeated occurrence of hypoxia, daytime sleepiness, lack of concentration, etc. Phenomenon.

Researchers from the Royal Melbourne Institute of Technology in Australia published a clinical research paper in Sleep magazine entitled: Alzheimer’s disease neuropathology in the hippocampus and brainstem of people with obstructive sleep apnea.

This is also the first clinically validated study to find amyloid deposits plaques similar to Alzheimer’s in the brains of patients with obstructive sleep apnea. This is an understanding of the relationship between these two diseases. The important advances in this field have also opened up new directions for the development of therapies for the treatment and prevention of Alzheimer’s disease.

In this new study, the research team examined the hippocampus of 34 patients with obstructive sleep apnea (18 females, 16 males, with an average age of 67 years) after death, and the brain stems of 24 patients with obstructive sleep apnea. organization. The test also looks for amyloid deposits and neurofibrillary tangles, which are known indicators of Alzheimer’s disease.

The test results show that in Alzheimer’s disease, amyloid deposits and neurofibrillary tangles first appear in nearby cortical areas, then transfer to the hippocampus, and then spread to the rest of the cortex. 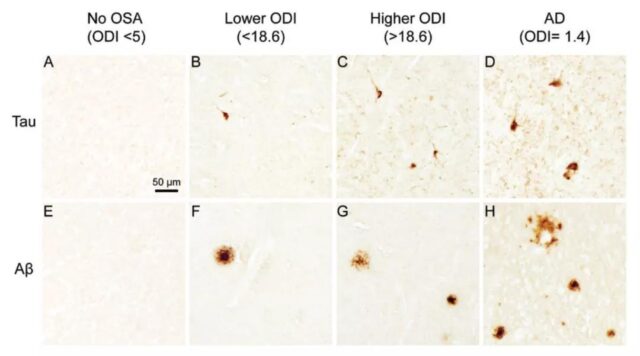 For those patients with mild sleep apnea, amyloid deposit plaques and neurofibrillary tangles can only be found in the cortical area near the hippocampus. This is also the first time these plaques and tangles appear in Alzheimer’s disease. The place.

In general, this is the first clinically validated study to find amyloid deposits plaques similar to Alzheimer’s in the brains of patients with obstructive sleep apnea, which is effective for these two diseases. Important advances in the understanding of the relationship have also opened up new directions for the development of therapies for the treatment and prevention of Alzheimer’s disease.

The research team said that the next stage will continue to analyze these samples to fully understand neuropathology, including signs of inflammation and changes in blood vessels that provide nutrients to the brain. At the same time, the research team also pointed out that the sample size of this study is limited, so the team will continue to work hard to establish a larger cohort of clinical studies.