However, in recent years, clinical trials of Alzheimer’s drugs targeting these two targets have been smashed. In the entire field of new drug research and development, perhaps no one can be as ups and downs as the field of Alzheimer’s.

The most ups and downs among them is the drug candidate aducanumab developed by Biogen and Eisai for Alzheimer’s disease.

In November 2007, Biogen introduced aducanumab, a monoclonal antibody candidate for the treatment of early Alzheimer’s disease from Neurimmune, which can selectively interact with β-starch in the brains of Alzheimer’s patients. Aβ-like protein (Aβ) deposits and binds, and then activates the immune system to clear the Aβ deposit protein in the brain.

Since October 2017, Biogen and Eisai have cooperated on the development and commercialization of this monoclonal antibody globally.

However, on March 21, 2019, Biogen announced the termination of the two global phase III clinical trials of aducanumab code-named ENGAGE and EMERGE. The independent committee assessed that it is likely to be difficult to achieve the expected efficacy. As soon as the news came out, Biogen’s stock price plummeted 27%, and its market value shrank by US$15 billion.

Unexpectedly, on October 22, 2019, Biojian announced that after analyzing a larger data set, its medical data statistician found that aducanumab had a significant effect compared to placebo. So re-submitted the “Biologics License Application” (BLA) application to the FDA. Affected by this news, Biogen’s share price soared 40%.

However, this is not over yet.

On November 6, 2020, the FDA’s Peripheral and Central Nervous System Drug Advisory Committee re-applied for Biogen, and most members voted against it.

In April 2021, Caleb Alexander, Scott Emerson, and Aaron Kesselheim, three members of the US FDA’s Peripheral and Central Nervous System Drug Advisory Committee, published an article in the JAMA journal criticizing aducanumab, saying that Biogen is shooting arrows first and then drawing targets.

The future of aducanumab, which has come back from the dead, is still uncertain. The outside world is still full of doubts about whether the FDA will approve the Alzheimer’s drug candidate aducanumab developed by Biogen and Eisai, which also makes it the most watched drug development story in 2021 ( one).

On June 7th, local time in the United States, the FDA announced the accelerated approval of aducanumab developed by Biogen to treat patients with Alzheimer’s disease. Aducanumab has also become the first new treatment approved for Alzheimer’s disease since 2003.

In September 2020, Genentech, a Roche company, and its partner AC Immune jointly announced that its in-development antibody drug targeting Tau amyloid, Semorinemab, missed the primary endpoint and two secondary endpoints in the Phase 2 clinical trial. On the day the results were announced, AC Immune’s stock price fell 42%. This failure was named by FiercePharma as one of the top ten failed clinical studies in the world in 2020.

The Donanemab monoclonal antibody targeting β-amyloid (Aβ) developed by Eli Lilly reached the primary endpoint in a phase 2 clinical trial, and the deposition of β-amyloid (Aβ) and Tau amyloid in the patient’s brain was achieved. Effectively clear. 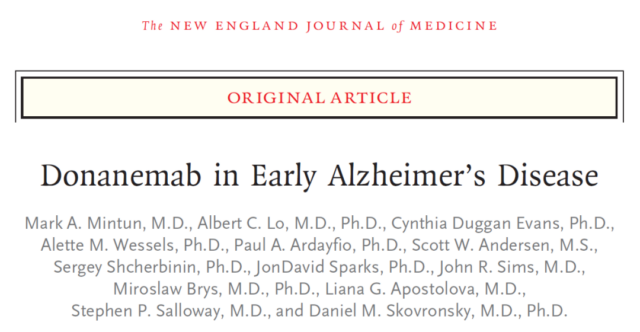 Donanemab is a monoclonal antibody developed by Eli Lilly and Company, which can target and bind β-amyloid (Aβ) modified by pyroglutamate at position 2 of the N-terminal to quickly and completely remove amyloid deposits.

The test results showed that the β-amyloid (Aβ) and Tau amyloid deposits in the patient’s brain were effectively eliminated, and Donanemab monoclonal antibody reached its primary endpoint. In terms of cognition and daily function, these symptomatic early Alz The rate of decline in the Integrated Measurement of Cognition and Daily Functioning (iADRS) of patients with Hemer’s disease slowed by 32%.

Overall, in patients with early Alzheimer’s disease, Donanemab monoclonal antibody treatment can significantly slow the decline of patients’ cognitive and daily function, although the secondary endpoint has mixed results.

Although the field of Alzheimer’s disease has failed frequently, scientists are now finding new hope from these failures.