The new oral NMDA receptor antagonist AXS-05 (dextromethorphan/bupropion) has been reviewed by the U.S. FDA as priority.

Recently, the company announced that the U.S. Food and Drug Administration (FDA) has accepted AXS-05 (dextromethorphan/bupropion modified release tablets) for the treatment of major depression (MDD) new drug application (NDA) and granted it The NDA is prioritized for review.

Priority review means that the review cycle of AXS-05 NDA will be shortened from the standard 10 months to 6 months.

Axsome CEO Herriot Tabuteau, MD, said: “We are very pleased that the FDA has accepted and prioritized the review of AXS-05’s NDA for depression. We look forward to continuing to work closely with the FDA throughout the review process. If approved, AXS-05 will become An important new treatment option for many American depression patients.”

AXS-05 is a new oral N-methyl-D-aspartate (NMDA) receptor antagonist with multimodal activity. It is currently in clinical development for the treatment of depression and other central nervous system (CNS) )disease.

AXS-05 is composed of a proprietary formula and dosage of dextromethorphan and bupropion, and uses Axsome’s metabolic inhibition technology.

The dextromethorphan component of AXS-05 is a non-competitive NMDA receptor antagonist, also known as a glutamate receptor modulator. This is a new mechanism of action, which means that its effect is similar to the current Most depression medications available are different.

The bupropion component of AXS-05 can improve the bioavailability of dextromethorphan. It is a norepinephrine and dopamine reuptake inhibitor and a nicotinic acetylcholine receptor antagonist.

AXS-05 has more than 100 U.S. and international patents with a protection period until 2040. 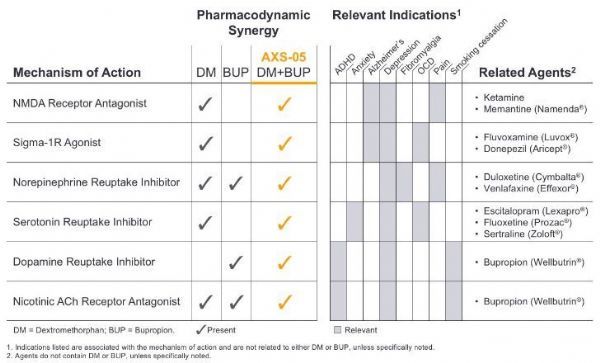 The NDA of AXS-05 in the treatment of MDD was supported by the results of 2 clinical trials (Phase 3 GEMINI trial, Phase 2 ASCEND trial).

These two trials are randomized, double-blind, controlled trials, carried out in patients diagnosed with moderate to severe MDD.

The results showed that compared with the placebo group and the positive control drug group, patients in the AXS-05 treatment group had a statistically significant improvement in depressive symptoms.

This is a randomized, double-blind, placebo-controlled, multicenter, phase 3 study in the United States. A total of 327 patients diagnosed with moderate to severe MDD were enrolled. In the study, these patients received AXS-05 or placebo at a 1:1 ratio, and were treated twice a day for 6 weeks.

The results showed that the study reached the primary endpoint. Compared with the placebo group, the AXS-05 treatment group showed a substantial, rapid, and statistically significant reduction in depressive symptoms: Montgomery-Sperger depression in the 6th week of treatment The overall score of the MADRS score scale achieved a statistically significant reduction from baseline (average reduction from baseline: 16.6 points vs 11.9 points, p=0.002).

In terms of key secondary endpoints, compared with the placebo group, the AXS-05 treatment group achieved a statistically significant improvement in the MADRS total score in the first week (p=0.007).

In addition, compared with the placebo group, the AXS-05 treatment group had a statistically significant improvement in all secondary endpoints at week 6, including: disease remission (p<0.001), disease severity (p=0.002) ), functional impairment (p=0.002) and quality of life (p=0.011), etc.

AXS-05 was well tolerated in the test. The most common adverse reactions in the AXS-05 group were dizziness, nausea, headache, diarrhea, drowsiness and dry mouth.

This is a randomized, double-blind, positive drug-controlled, multicenter, phase 2 study in the United States. A total of 80 patients diagnosed with moderate to severe MDD were enrolled.

In the study, these patients were treated with AXS-05 or bupropion.

The results showed that compared with the bupropion treatment group, the AXS-05 treatment group showed a substantial, rapid, and statistically significant reduction in depressive symptoms.

In terms of the pre-specified primary endpoint, during 6 weeks of treatment, compared with the bupropion treatment group, the Montgomery-Sberg Depression Rating Scale (MADRS) total score in the AXS-05 treatment group achieved statistical significance relative to the baseline Significantly reduced (13.7 points vs 8.8 points, p <0.001). In the study, AXS-05 was safe and well tolerated.