On October 1, 2021, Merck announced that the oral antiviral drug Molnupiravir developed by it and Ridgeback is safe and effective for the treatment of COVID-19.

Because the results exceeded expectations, the study was terminated early.

This news quickly stirred up a frenzy, not only was quickly forwarded by various media, but also set off a frenzy in the stock market.

The interim analysis of the Phase 3 MOVe-OUT clinical trial announced this time is a multi-center RCT study. This time, a total of 775 subjects’ data were evaluated.

Subjects have laboratory-confirmed mild to moderate COVID-19, at least one risk factor related to serious illness (such as obesity, age> 60 years, diabetes, and heart disease), and symptoms appear before randomization 5 Within days.

The main efficacy indicator is the percentage of hospitalizations and/or deaths within 29 days after randomization.

Among the evaluated cases, mutants such as Delta, Gamma and Mu accounted for 80% of the infected.

This phase 3 clinical trial originally planned to recruit 1550 patients. As the interim analysis showed very positive results, the recruitment and further trials were stopped after communication with the FDA.

Merck is currently applying for an emergency use authorization (EUA) from the FDA.

Merck expects to produce 10 million treatment courses by the end of 2021. According to the purchase agreement signed by Merck and the US government in June 2021, if the US FDA grants emergency use authorization for Molnupiravir, the United States will purchase 1.7 million treatment courses of Molnupiravir, worth Approximately 1.2 billion U.S. dollars.

In addition, Merck has also signed agreements with multiple generic drug companies to accelerate the supply of Molnupiravir in low- and middle-income countries.

The basis of Molnupiravir’s success

The antiviral drug Molnupiravir (EIDD-2801) is an antiviral small molecule (RdRp inhibitor) that I tracked from the in vitro experiment to the phase 3 results of the clinical trial. So happy to see this result.

As early as March 2020, Baric, a well-known coronavirus expert and UNC who had reported the bat coronavirus SHC014 with Shi Zhengli, just uploaded a very important article on bioRxiv, reporting that his newly synthesized compound NHC is killing the new type of coronavirus. In terms of viruses, it is more active than Remdesivir in vitro, and the coronavirus that is resistant to Remdesivir is still effective.

Its IC50 for the new coronavirus SARS-CoV-2 in the Vero cell line is 0.3uM, which is stronger than Remdesivir’s 0.77uM.

EIDD-2801 is a biological prodrug of NHC (beta-4-hydroxycytosine-5′-isopropyl ester). EIDD-2801 administered to mice infected with SARS-CoV can relieve the weight loss of mice and inhibit pulmonary hemorrhage. And the coronavirus replicates in the lung tissue. At the same time improve lung function, reduce acute lung injury and alveolar disease.

Uploaded on June 21, 2021 on medRxiv, in a clinical trial led by the University of North Carolina (UNC), 3 days after treatment, the probability of isolating replicative virus in patients treated with EIDD-2801 (Molnupiravir) at 800 mg was significant It is lower than the placebo group (1.9% vs. 16.7%, p = 0.02), which is a gold standard for testing the infectivity of the virus.

NHC will cause viral RNA replication to incorporate a large amount of A and G, resulting in mutations in the RNA product. Structural analysis of the RdRp-RNA complex containing the mutagenized product showed that NHC can form a stable base pair with G or A in the active center of RdRp, which explains how the drug evades proofreading and synthesizes mutant RNA.

This two-step mutagenesis mechanism may be applicable to various viral polymerases, so Molnupiravir may have broad-spectrum anti-RNA virus activity.

In the early stages of infection, the virus replicates rapidly, and the host’s immune system has not yet had enough time to establish an immune defense, so the best time for antiviral treatment to block the virus is a few days before the infection.

Molnupiravir is designed for outpatient use in the early stage of the disease and is an oral capsule, so the number of beneficiaries will be greatly increased.

In this regard, Dr. Fauci, the chief medical adviser of the White House, commented today as “impressive,” (impressive).

In the treatment of early and mild COVID-19, the three drugs that have been approved are all monoclonal antibodies, all of which are injections, and usually require hospitalization, which severely limits their clinical use.

Another antiviral drug, once the “people’s hope”, the remdesivir developed by Gilead is also an injection, so it cannot be used early in outpatient clinics but can only be used for severely ill patients who are hospitalized; moreover, there is more and more evidence Shows that Redcivir is ineffective in treating patients with severe COVID-19.

The final clinical trial of Merck’s antiviral drug Molnupiravir has shown positive results far beyond market expectations, and has greatly satisfied the most important and far-resolved clinical problems at present.

As Scott Gottlieb, the former director of the U.S. FDA, said:

“This is a phenomenal result, I mean this is a profound game-changer to have an oral pill that had this kind of effect,”

Sure enough, on the one hand, not only did Merck’s share price soar, but even the U.S. stock market, especially the share prices of companies in the travel sector such as Disney, also rose sharply after hearing the news. It means that people value the important role of Molnupiravir in returning to normal life as soon as possible. 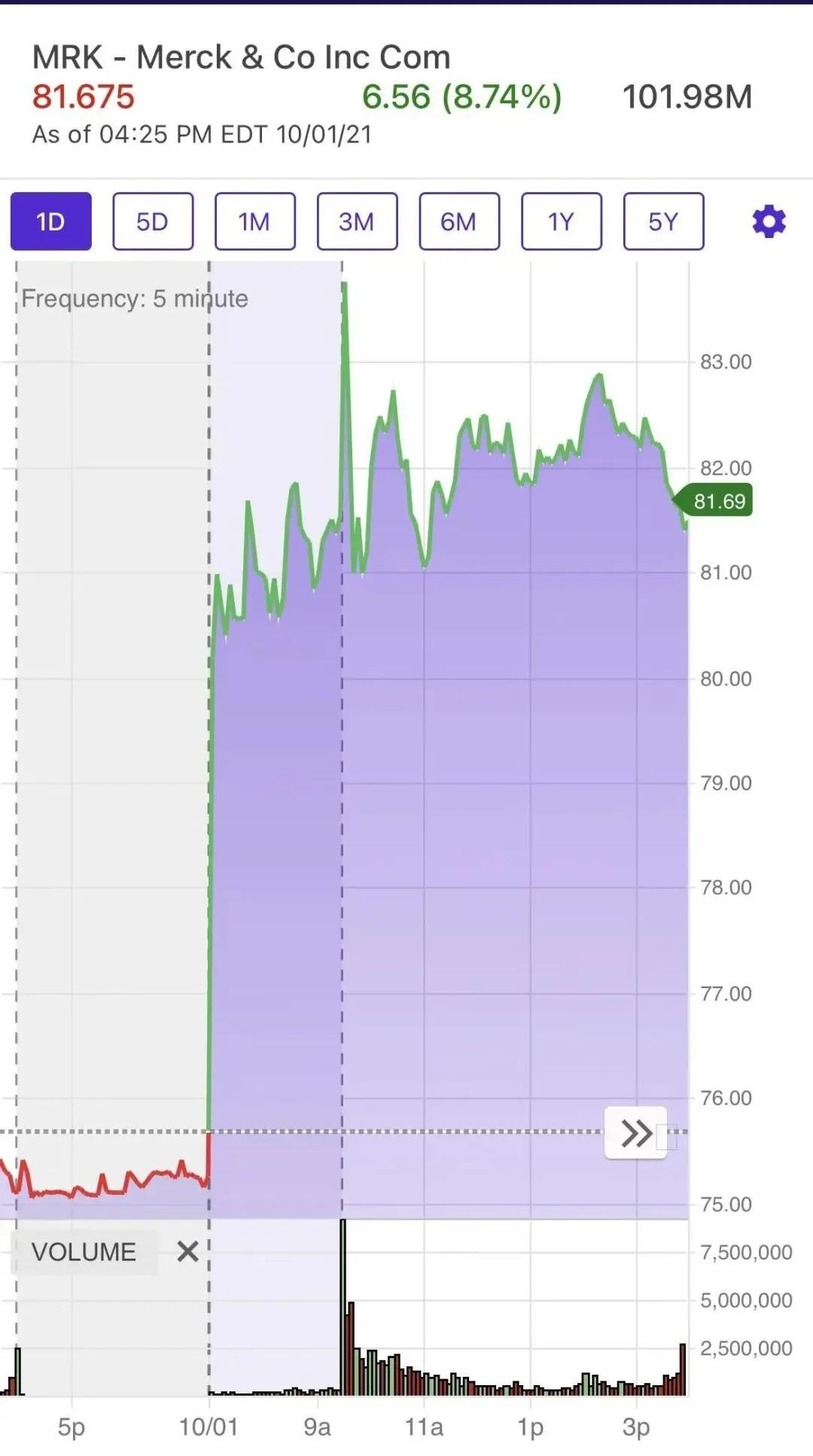 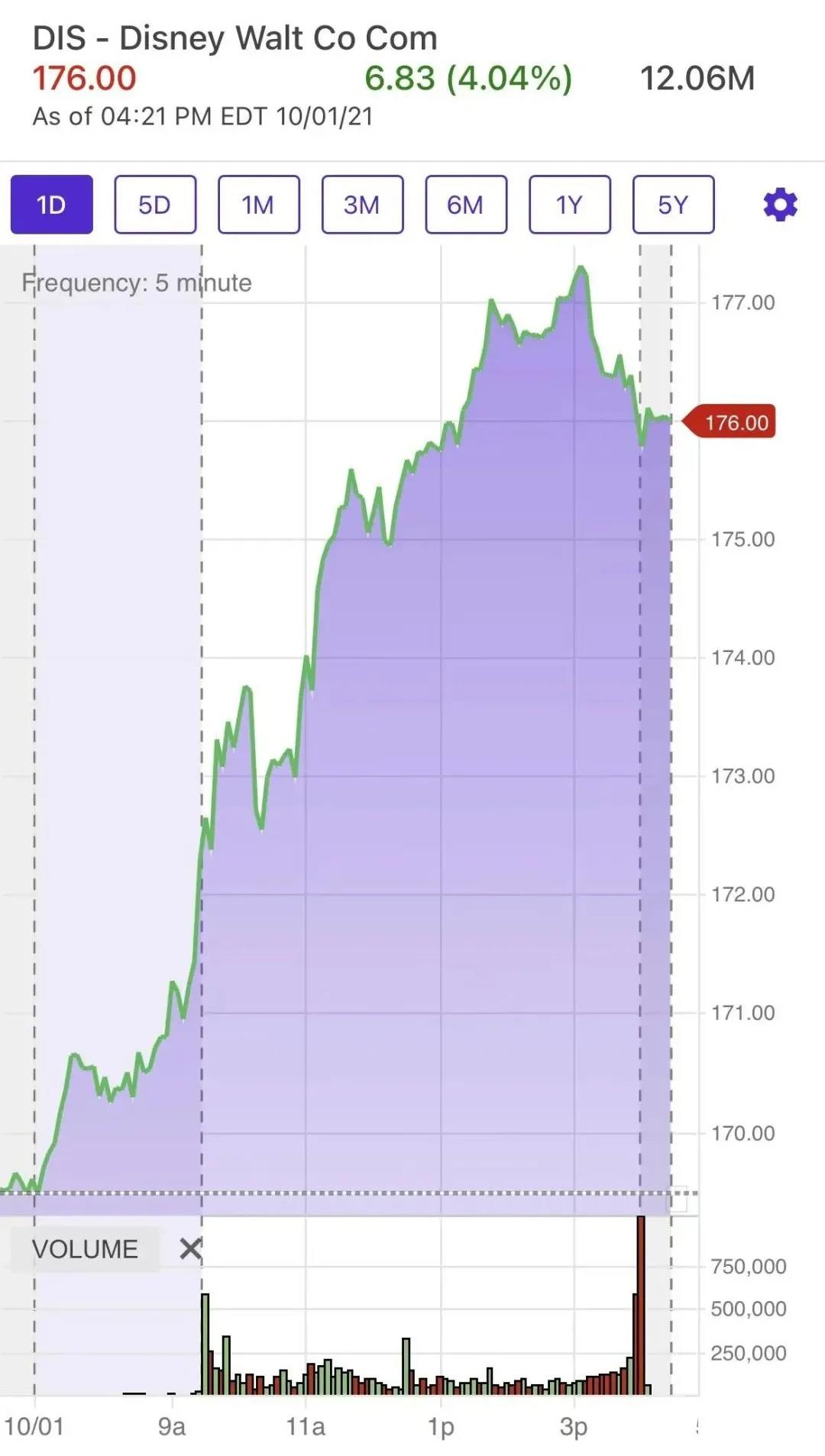 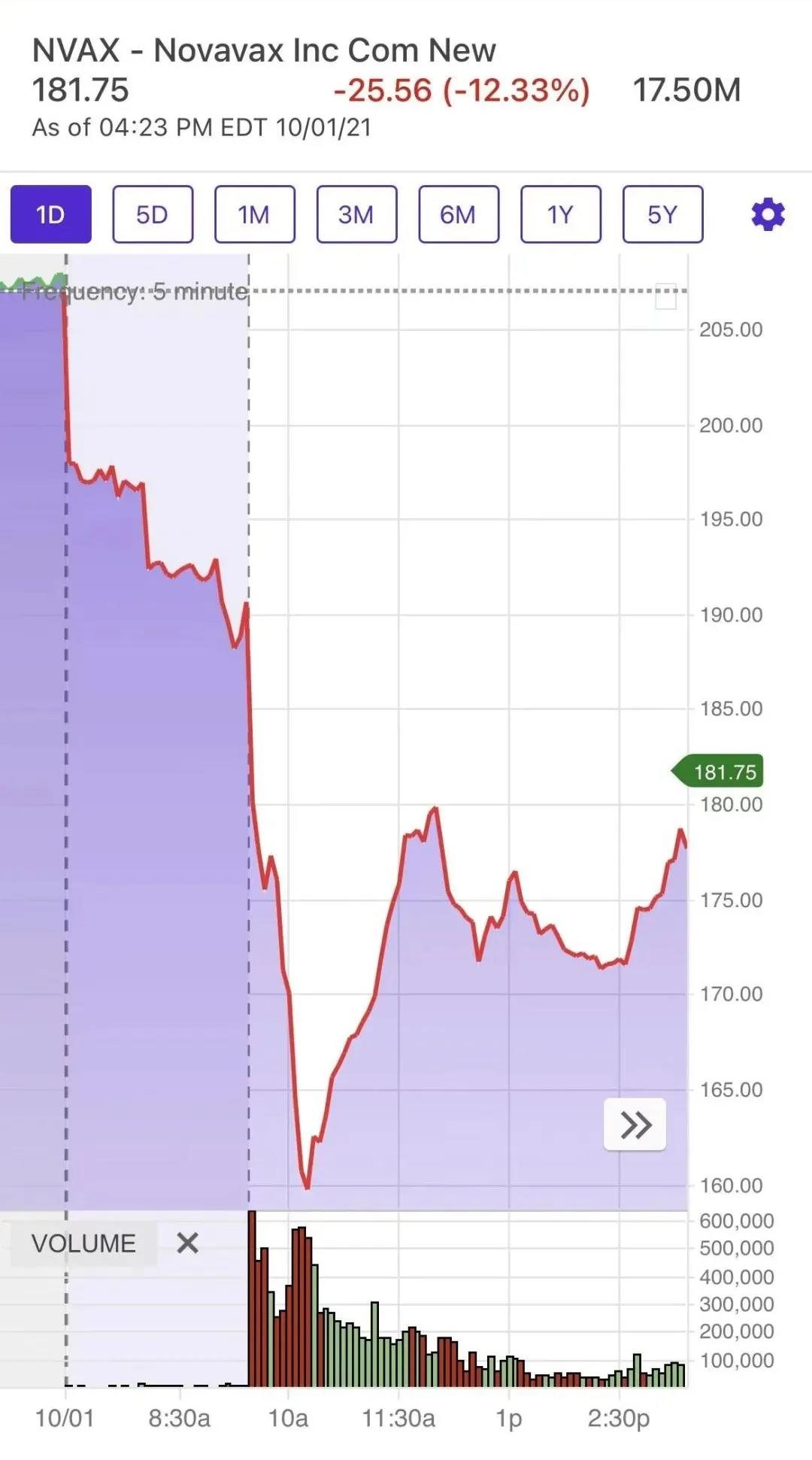 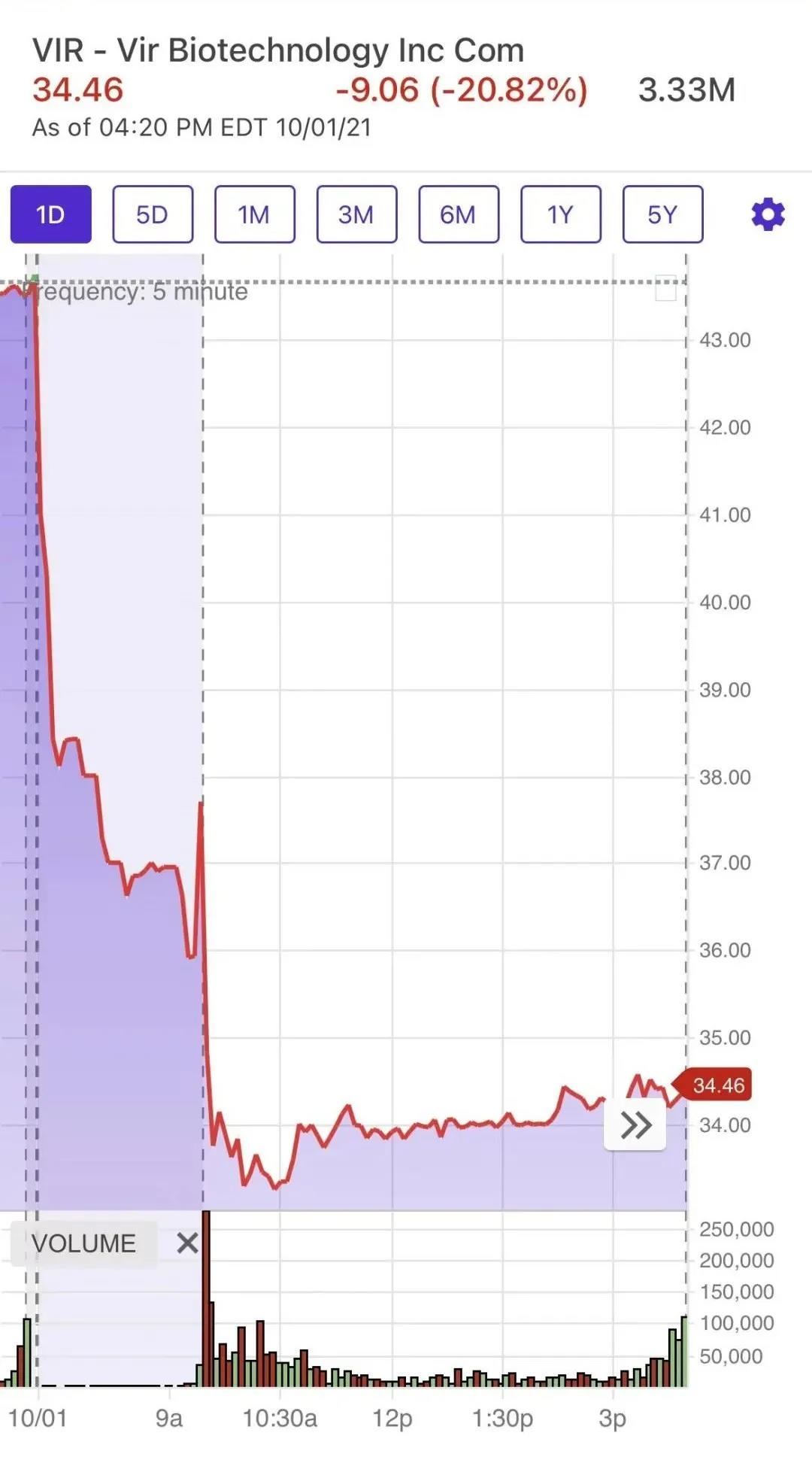 However, antiviral drugs, as a treatment plan used after infection, cannot actually replace vaccines as a preventive method used before infection. That is to say, human beings are still inseparable from vaccines, and vaccination is still the basis for preventing COVID-19 infection. As a result, the stock price of vaccine companies gradually recovered after a sharp drop.

But oral antiviral drugs will obviously replace part of the use of antiviral monoclonal antibodies.

However, we also need to see that the current oral antiviral drugs can only reduce the critical illness/mortality rate by 50%. That is to say, 7.3% of the infected group after oral antiviral treatment still suffered from severe illness or death, which still cannot meet the needs of human beings.

This means that looking for more effective antiviral drugs, as well as antiviral drugs combined with monoclonal antibodies, is still a need for the treatment of COVID-19.

While making breakthroughs in oral antiviral drugs, approved monoclonal antibodies have also studied outpatient intramuscular injections to treat COVID-19, and some progress has been made.

Because of the positive results of the oral antiviral drug Molnupiravir in clinical trials, people have even more reason to look forward to getting rid of the troubles of the new coronavirus and returning to normal life as soon as possible.