Here is a summary of the most comprehensive treatment options for ovarian cancer.

The symptoms of ovarian cancer are not obvious, and many patients are at an advanced stage when they are diagnosed. The first line of treatment for ovarian cancer is platinum-based chemotherapy. After the disease progresses, anti-angiogenic drugs bevacizumab and PARP inhibitors such as olaparib, niraparib, and lucaparib can be considered. However, the results of the patient’s first-line treatment affect the choice of subsequent treatment drugs.

The treatment of recurrent ovarian cancer combined with the latest literature is summarized as follows.

From the existing research, the main influence on the treatment decision of recurrent ovarian cancer is the platinum-free interval, which is the time from platinum-containing chemotherapy to disease progression (PFI).

According to the length of PFI, ovarian cancer is defined as several subgroups:

About 50% of patients with high-grade serous ovarian cancer have homologous recombination defects (HRD), including BRCA1 and BRCA2 gene mutations.

These mutations affect the response to platinum-based chemotherapy and PARP inhibitors. The cause of homologous recombination defective HRD may not only be the BRCA gene mutation, but also include CCNE1 amplification, PTEN, RB1 or NF1 gene deletion.

Because tumors have the characteristics of continuous evolution and heterogeneity, resistance to platinum-containing chemotherapy seems to be destined to happen. The main goal of treatment of ovarian cancer is to prolong the emergence of platinum resistance. Possible strategies include the use of drugs with different mechanisms of action for alternative chemotherapy, selection of drugs based on the biological characteristics of the tumor, and the alternation between platinum-based chemotherapy (short-term stress) and maintenance therapy (continuous stress).

When choosing a treatment for recurrent ovarian cancer, there are four situations based on the patient’s previous treatment:

1. Only chemotherapy was used, bevacizumab was not used, and PARP inhibitors were not used.

2. Chemotherapy combined with PARP inhibitors, bevacizumab was not used.

4. Chemotherapy, bevacizumab, and PARP inhibitors are all used.

The first treatment scenario: For untreated patients who are responsive to platinum, ESMO-ESGO recommends that patients with high disease burden and priority relief of symptoms should be treated with platinum-containing chemotherapy combined with bevacizumab. For other patients, platinum-based chemotherapy is the main treatment. Then use PARP inhibitors for maintenance therapy. The results of clinical studies have shown that PARP inhibitors are very effective for prolonging progression-free survival, especially for patients with BRCA germ cell mutations or HRD defects.

The second treatment scenario: If the patient has previously used PARP inhibitors and may be sensitive to platinum-based chemotherapy, ESMO-ESGO recommends platinum-based chemotherapy combined with bevacizumab. In clinical studies, compared with carboplatin combined with gemcitabine, the addition of bevacizumab can extend the median progression-free survival time from 8.4 months to 12.4 months.

The third treatment scenario: If the patient has received bevacizumab before, but may be sensitive to platinum-based chemotherapy. Regardless of the mutation status of BRCA and HRD. Then, platinum-containing chemotherapy first, followed by maintenance therapy with PARP inhibitors is the best option.

PARP inhibitors such as olaparib, niraparib, and Lucappanil can also be used for relapsed ovarian cancer that is resistant to a variety of treatments, but if the disease progresses after treatment with PARP inhibitors, is chemotherapy still effective? There are doubts. The results of an Italian retrospective study were disappointing. After olaparib maintenance treatment progressed, chemotherapy was used again, and the treatment response rate was relatively low.

The response rate of re-chemotherapy for completely sensitive type (PFI>12 months) was 22.2%;

Partially sensitive (6 months <PFI <12 months), and the response rate of re-chemotherapy was 11.1%;

Resistant type (PFI<6 months), the response rate of re-chemotherapy was 9.5%;

If PARP inhibitors maintain treatment resistance, the effect of re-chemotherapy may be poor, which may be a cross-type resistance.

Of course, this conclusion needs more large-scale clinical research support. The resistance mechanisms of PARP inhibitors are multifaceted, which may be secondary mutations of BRCA, mutations of P53 gene, and high expression of related proteins and efflux PARP drugs. What is interesting is that the resistance of this PARP inhibitor is heterogeneous, and the metastasis of ovarian cancer does not exist. Therefore, it also provides the use of surgery to remove the original disease that has developed resistance.

The fourth treatment scenario: If it is a newly diagnosed advanced ovarian cancer, in the PAOLA-1 / ENGOT-OV25 clinical study, the patient first uses platinum chemotherapy combined with bevacizumab, and then uses olaparib for maintenance treatment to obtain 22.1 The progression-free survival time of 6 months, while the placebo maintenance treatment was only 16.6 months of median progression-free survival. But because the patient has used all the drugs, if the disease progresses, he can only use chemotherapy.

Although for patients with BRCA gene mutations in embryonic cells, olaparib is used for maintenance therapy after first-line chemotherapy. But this part of patients is still relatively small. For patients with homologous recombination-deficient HRD, it is important to use suitable PARP inhibitors such as niraparib for maintenance therapy, but this requires appropriate testing (Note: HRD testing can be found on the genetic testing page of Cancer Degree APP Select, BGI’s HRD testing product). 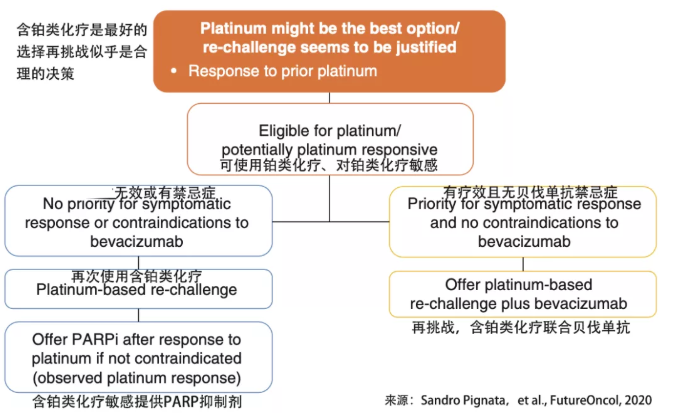 The importance of inserting different mechanisms of action

The main goal of treating recurrent ovarian cancer is to prolong patient survival, which may span multiple treatment methods. Sequential treatment is used after each relapse to delay disease progression while maintaining a high quality of life.

When planning a treatment plan, you need to pay attention to the importance of maintaining platinum sensitivity. Unfortunately, after every platinum treatment, the loss of efficacy and the increase in toxicity are normal. Therefore, it is very important to intersperse chemotherapy or drugs with different mechanisms.

Since ovarian cancer may involve a variety of treatment methods, it is particularly important to restart the previously administered drugs. Studies have reported the use of platinum, paclitaxel, bevacizumab, polyethylene glycol liposomal doxorubicin (PLD) again.

A multi-center clinical research trial evaluated the reactivation of polyethylene glycol liposomal doxorubicin (PLD) treatment. The response rate of 27 patients with recurrent ovarian cancer was 49%, and the complete remission rate was 19%. The remission rate was 30%.

Looking to the future, choose the most suitable among more options

Clinical research data on chemotherapy, immunotherapy, and bevacizumab will be released in the next few months, and there will be multiple treatment options for future ovarian cancer treatment. The main challenge for clinicians is to choose the most suitable plan for the patient.

Patients with ovarian cancer usually undergo multiple treatments, and it is very important to conduct forward planning. After the progression of platinum-containing chemotherapy, in addition to considering this progression-free time PFI, multiple factors need to be considered to ensure that the onset of drug resistance is delayed. The alternating use of chemotherapy with different mechanisms of action and the reactivation of previously resistant chemotherapy drugs are all treatment options worth considering.

Statement: The information involved in this document is for reference only, please follow the advice or guidance of doctors or other medical and health professionals