Combination medication may produce uncontrolled side effects. Bispecific antibodies simultaneously bind to two different targets, or different epitopes of the same target, which solves this problem to a certain extent.

In 1983, scientists Milstein, C. from MRC and Cuello, A. C. from Oxford University established the Hybrid-Hybridoma technology, which uses the fusion of two hybridoma somatic cells to produce bispecific antibodies.

Each hybridoma expresses one of the monoclonal antibodies, and then the two antibody-expressing hybridoma cells are fused to express IgG light and heavy chains from the two parents.

As the first technology to produce bispecific antibodies, the yield was low, and the random combination of light and heavy chains resulted in poor uniformity and difficult purification. 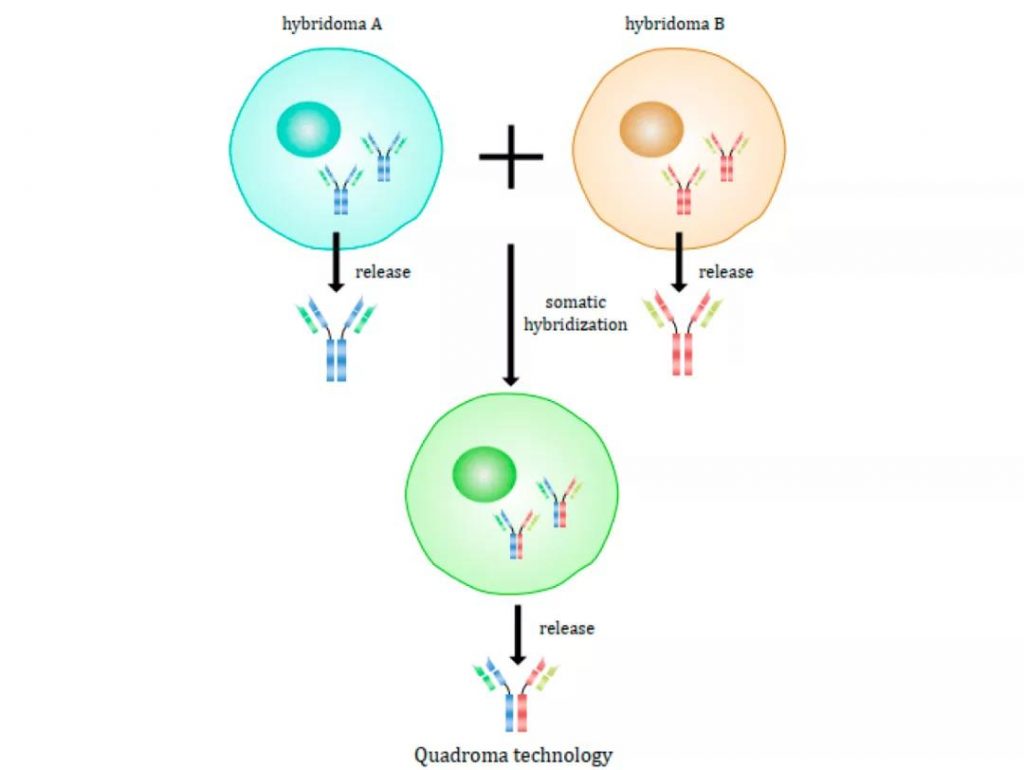 In order to solve the problem of poor uniformity caused by the random combination of light and heavy chains, in 1995, German scientist H Lindhofer developed the mouse-rat chimera Quadroma technology.

Compared with the first-generation Quadroma technology, mouse-rat chimera bispecific antibody enrichment and purification is more convenient. ProteinA does not bind to rat antibody, and at pH 5.8, bispecific antibody can be eluted, pH 3. 5 Mouse maternal antibodies are eluted.

The first bispecific antibody Catumaxomab (anti-EpCAMx anti-CD3) is the product of mouse-rat chimera Quadroma technology, which was approved in Europe in 2009. 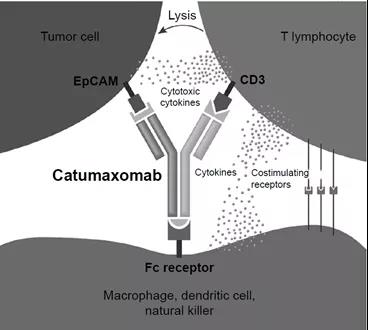 In heavy chain assembly, the usual strategy is to have two different heavy chain structures or complementary charges.

The heavy chain forms dimers mostly through the CH3 domain of Fc, and different technology platforms mainly focus on the modification of CH3. 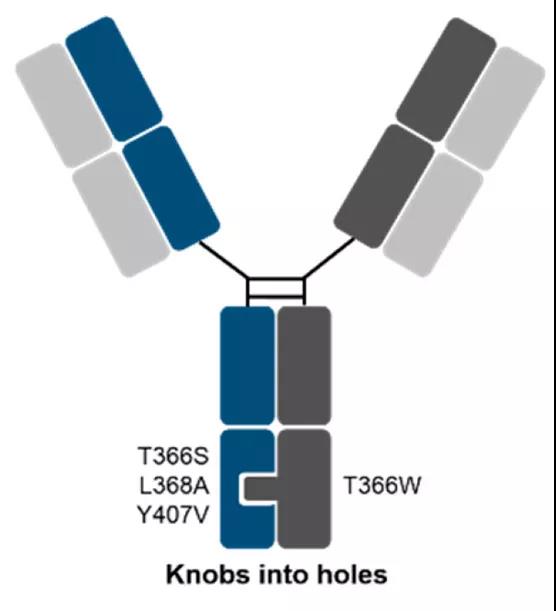 KIH was the first packaging model of amino acid side chains in alpha helix proposed by Crick in 1953.

In 1996, Carter of Genentech and his colleagues developed the KIH technology for double-antibody heavy chain assembly (Reference 6).

Amino acid substitution (such as T366W), insert it into Hole (large amino acid is replaced by small amino acid), this is the first technology platform for double antibody heavy chain assembly.

One of the problems is that the binding site of ProteinA and FcRn is located at the junction of CH2 and CH3 of IgG, which is not in IgA. Therefore, the residues exposed in the solvent must be replaced with the IgG sequence to bind to ProteinA, facilitate purification, and bind to FcRn , Extend the half-life. 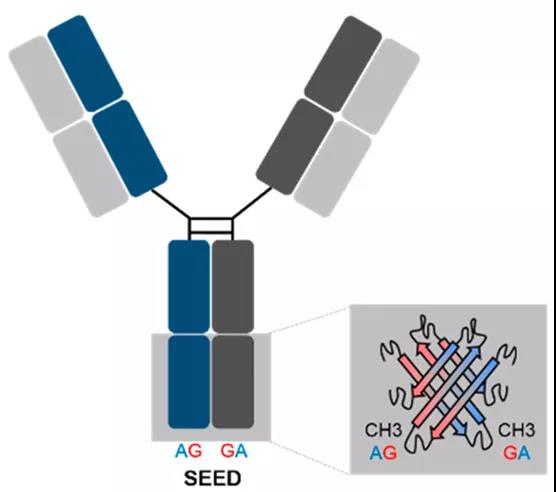 In 2016, Regeneron invented a new method in which one heavy chain was mutated with two amino acids, which basically did not change the structure of the antibody.

Transfer the two amino acids (phenylalanine and arginine) of IgG3 (not bound to ProteinA) CH3 to CH3 (H435R and Y436F) of IgG1 to prevent the double antibody from binding to ProteinA resin. 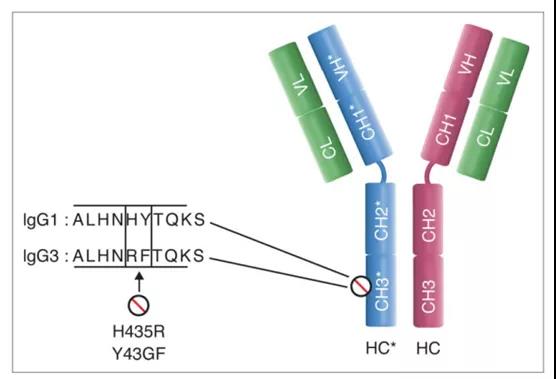 A salt bond is formed between the two lysines, and the natural amino acid and the replacement amino acid on the opposite CH3 stabilize the DEKK structure together. 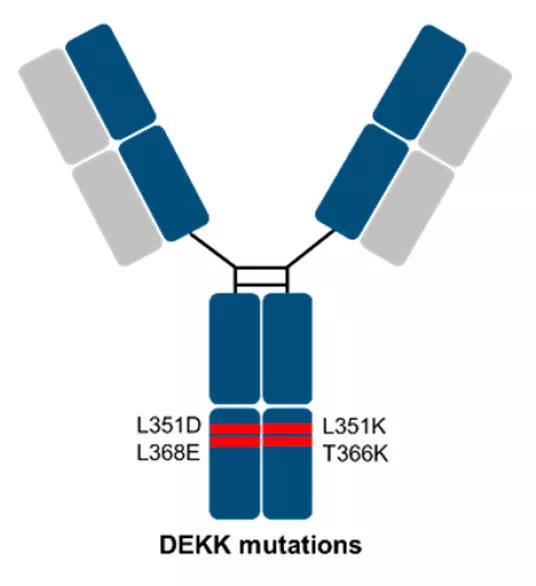 It is expressed together with the common heavy chain, and purified by ProteinA, κ-selection column, and λ-selection column to obtain both κ chain and λ chain Bispecific antibodies. 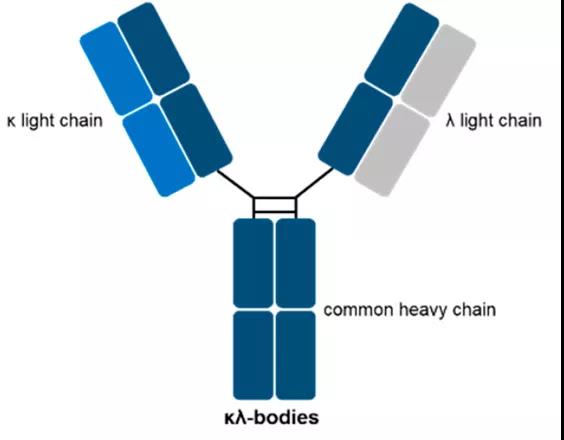 The technology developed by both Amgen and Pfizer generates charge polarity in CH3 mutations, and forms heterodimers through the attraction of charges. 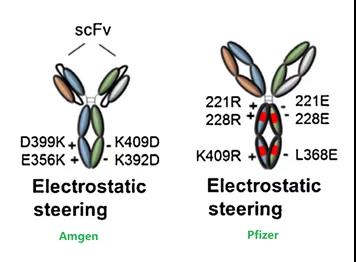 Two different IgG1 antibodies after mutation were expressed in two CHO cell lines and the assembly between the light and heavy chains of the half-antibody was completed.

After protein A affinity purification, the use of a mild oxidant system can achieve heterologous half-antibody in vitro Precise assembly between. 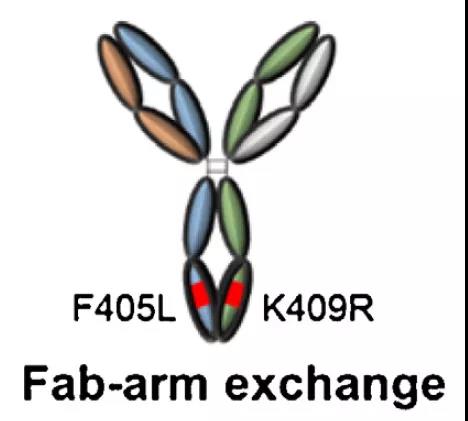 Scientists at Genentech added a leucine zipper to the CH3 of the heavy chain of a single antibody to facilitate antibody assembly and easy removal after purification.

Crossmab technology is based on the “knob and socket” transformation, which swaps CL and CH1 in the Fab domain of one antibody, while the Fab structure of the other antibody remains unchanged.

The light chain of the modified antibody is not easily mismatched with the heavy chain of another antibody, and the “knob and socket” structure can promote the heterodimerization of the two heavy chains. 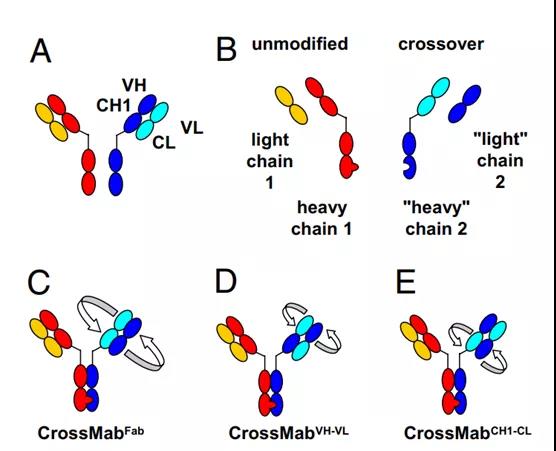 On the basis of its Basic DART technology, MaroGenics has added Fc to establish an IgG-like bispecific or trispecific antibody platform.

The Phase2 clinical trial of head and neck cancer (NCT04634825) was recently started.

It is another design that retains the Fc domain of an antibody. Its structure is to connect the VL and VH of another antibody at the N-terminus of the light and heavy chains of a normal antibody, respectively.

Such molecules have the same Fc region as existing antibodies, so they can be produced using existing general antibody technology. 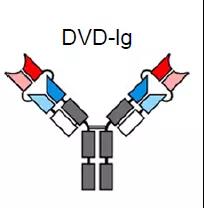 Proposed by Genentech company Bostrom and others, it uses phage display technology to optimize the commercial antibody Herceptin that specifically binds to the HER2 target, so that it can specifically bind to VEGF while retaining the ability to bind to HER2, thereby achieving a The antibody binds to two targets at the same time, so it is called Two-inone bispecific antibody, also known as DAF antibody (Dual Action
Fab, DAF). 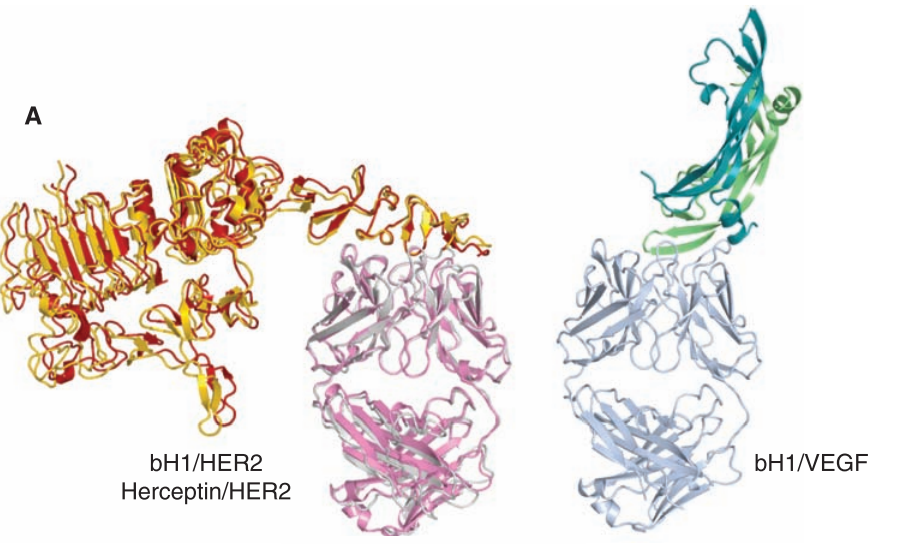 Moreover,the molecular structure of IgG-like double antibodies is much more than that.