The development history of bispecific antibodies!

The development history of bispecific antibodies!  When it comes to antibodies, many people are not unfamiliar. The so-called antibody refers to the protective protein produced by the body due to the stimulation of antigen.

Bispecific antibodies have rapidly become a hot research project in the field of immunotherapy due to their unique structural specificity and significant clinical treatment effects, especially in the field of tumors.

With the advancement of research and technology, we have entered a new era of customized immunotherapy, and the demand for bispecific or multispecific immunoglobulins is increasing at a huge rate for the treatment of various diseases.

Next, I will briefly share with you the development history of bispecific antibodies.

In 1960, Nisonoff et al. linked two different antigen-binding fragments together through reoxidation, and proved that the product can recruit two different types of cells, and proposed the concept of bispecific antibodies for the first time.

In 1975, Kohler and Milstein successfully fused the splenic B lymphocytes of immunized mice with myeloma cells in the Molecular Biology Laboratory of the Medical Committee of the University of Cambridge, forming a B cell-myeloma hybrid. This cell hybrid can not only proliferate and survive indefinitely in vitro culture, but also secrete monoclonal antibodies against sheep red blood cells. On August 7 of the same year, Kohler and Milstein published a famous paper entitled (Continuous cultures off used cells secreting antibody of predefined specificity) in the British journal Nature, and formally proposed the concept of hybridoma. Later, for their contribution to immunology, they and Niels K. Jerne won the Nobel Prize in Physiology and Medicine in 1984.

In 1983, Milstein et al. used the fusion of two hybridoma cells to produce bispecific antibodies with an asymmetric structure for the first time, and proved the advantage of this method over chemical synthesis, that is, it avoids the latter in processing the antibody to melt the chain. When causing protein denaturation, the antibody is inactivated. However, in the random pairing of the heavy and light chains of the fusion hybridoma cells, a large number of non-functional antibodies are produced, which makes the yield of bispecific antibodies extremely low. This phenomenon is called the chain cross-linking problem (Chain- associationissue).

In 1988, Huston et al. invented ScFvs (single-chain antibody fragment). ScFvs consist of a single-chain variable region composed of a heavy chain variable region (VH) and a light chain (VL) variable region. 15-20 amino acid links. Each subunit of ScFvs includes 3 hypercomplementarity determining regions (CDRs) that can bind to antigen. Since ScFvs is only about 25kDa, ScFvs is considered to be the smallest IgG unit with full antigen binding activity. 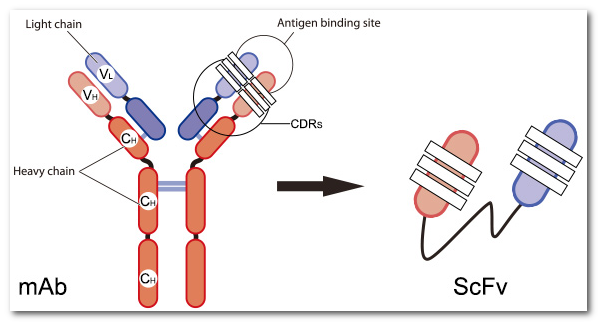 In 1993, Diabodies, a bispecific antibody without Fc segment, was reported for the first time. Diabodies have small molecules, strong tissue penetrating ability, and easy access to the focus of the disease. They play an important role in immunotherapy.

In 1995, Lindhofer et al. solved the problem of chain cross-linking. They found that the fusion of rat and mouse hybridomas can increase the correct rate of light chain and heavy chain pairing. This discovery significantly increased the yield of bispecific antibodies. , Provides the possibility of its mass production.

In 1996, Ridgway et al. solved the problem of chain cross-linking by using a spherical hole method on the CH3 domain of an antibody.

In 2009, the world’s first bispecific antibody drug Catumaxomab (Catumaxomab) was approved in the European Union for the treatment of patients with EpCAM-positive malignant ascites. Catumaxomab is a trifunctional antibody with a molecular weight of 150kDa. It consists of a mouse IgG2a targeting tumor EpCAM and a rat IgG2b targeting CD3ε. It can also activate monocytes, macrophages, and stellate cells through Fcγ receptors. Cells and NK cells.

Although Catumaxomab is the first bispecific antibody approved for marketing, it also has very obvious limitations, which are mainly reflected in the complicated production process of Triomab antibody and the immunogenicity problem that heterologous antibodies are easier to produce.

In 2014, the world’s second bispecific antibody drug Blinatumomab (bonatumomab) was approved in the United States for the treatment of Fischer-negative precursor B-cell acute lymphoblastic leukemia.

The approval of Emicizumab indicates that the treatment of hemophilia is no longer limited to traditional clotting factor replacement therapy, but is moving towards immunotherapy and gene therapy.

Amivantamab is a bispecific antibody that targets EGFR resistance mutations, MET mutations and amplifications. It can simultaneously bind to the extracellular structures of EGFR and c-Met, block the binding of ligands to EGFR and MET, and promote Body degradation can also trigger antibody-dependent cytotoxicity.

On the whole, there are still few bispecific antibody drugs that have been approved for marketing. Most drugs are in the preclinical development stage or clinical research stage. Opening up a new field of molecular medicine, we look forward to the launch of more and better dual-antibody drugs to benefit human health.