Prostate-specific membrane antigen (PSMA) has been confirmed in many studies to be specifically expressed on the neovascularization of prostate cancer cells and several other cancer entities.

However, the expression of PSMA on both tumor cells and tumor blood vessels remains unclear, even though this “dual” expression will constitute an important asset to facilitate the influx of sufficient effector cells into a given tumor site.

To this end, researchers from the University of Tubingen in Germany published an article “An IgG-based bispecific antibody for improved dual targeting in PSMA-positive cancer” in EMBO Molecular Medicine. In the article, they reported the effectiveness of a PSMA antibody. Produced, called 10B3, has superior dual reactivity to sections of prostate cancer and lung squamous cell carcinoma. 1

OB3 is used to construct bispecific PSMAxCD3 antibodies based on Fab- and IgG-format T cell recruitment, designated as Fabsc and IgGsc, respectively. In vitro, both molecules showed comparable activity.

In contrast, only the larger IgGsc molecules induced complete and durable elimination of established tumors in humanized mice. After treating 3 patients with prostate cancer with IgGsc reagent, significant activation of T cells and a rapid decrease in PSA levels were observed.

Ideally, an optimal target antigen is not only expressed on tumor cells, but also on tumor blood vessels to allow adequate influx of immune cells through the damaged vascular endothelium and subsequent tumor cell destruction. It has been previously reported that PSMA is expressed on tumor cells in prostate cancer samples and on tumor vascular cells in many other solid tumors. However, the problem of simultaneous and dual expression of this antigen still exists.

In terms of format, bsAbs are usually constructed as two covalently linked single-chain fragments, whether in a secondary antibody or BiTE format. The low serum half-life of this molecule ensures good controllability during clinical application, but requires cucumber-some continuous infusion system. Another disadvantage of these formats is the tendency of many single-stranded fragments to form agglomerations. The author believes that this not only constitutes a technical problem for process development and operation, but also may lead to undesirable immunogenicity and increase the activation of T cells outside the tumor.

Recently, various bispecific formats based on IgG have been developed. However, some of them retain the tendency to gather or lack the stability required by the industrial production process.

In summary, researchers intend to use the following methods to overcome the above-mentioned challenges of bsAb development:
*Generate and characterize a new PSMA antibody to improve dual targeting of tumor cells and tumor vascular cells.

10B3 is an IgG2b antibody, obtained using conventional hybridization procedures, as described in the Materials and Methods section. Compared with J591 (Wang et al., 2015), 10B3 is a mature PSMA antibody. According to reports, it can recognize the linear epitope on the native PSMA molecule located in its apical domain (Figure 1A). 10B3 is not suitable for Western blotting. Analysis and detection of PSMA (Figure EV1A). However, both of these antibodies can specifically precipitate PSMA from prostate cancer cell lines, and it is worth noting that they can also precipitate PSMA from lung squamous cells.

Then, 10B3 and J591 were compared by immunohistochemistry on frozen sections of various normal and malignant human tissues. Both antibodies have a certain reactivity with normal prostate epithelium, proximal renal tubules, salivary glands and (to varying degrees) liver cells, as well as breast and gastrointestinal epithelial cells, the latter may be excessive in these tissues The illusion of mucin. Although the benchmark PSMA antibody J591 and the authors’ new PSMA adhesive 10B3 showed similar binding affinity to PSMA in vitro (Figures EV1E and F), when the researchers compared and analyzed their binding in various solid tumor samples Time. The results shown in Figures 1B-D and EV2 show that:

1. In prostate cancer, the staining of tumor cells with J591 and 10B3 is comparable, and in this disease entity, it is observed that 10B3 binds to new blood vessels more obviously than J591 (Figures 1B and D, and EV2A).

2. In the SCC samples of various cancer entities other than lung cancer (non-lung cancer SCC, n = 34, 28 head and neck cancers, 3 cervical/uterine cancers, 2 bladder cancers, 1 penile cancer), two were observed The binding rate of this antibody to tumor cells is very low. 10B3 exhibited slightly but significantly more pronounced staining. Substantial binding of J591 and 10B3 to the neovascularization of these non-pulmonary SCC samples was observed, and 10B3 again showed slightly but significantly higher staining (Figure 1D). This is consistent with the previously published results on the massive expression of PSMA on the tumor blood vessels of various cancer entities).

3. The most important difference is that the combination of 10B3 and J591 can be recorded in the lung SCC. Here, they observed that compared with J591, 10B3 had significantly and significantly higher binding to tumor cells, while binding to new blood vessels was quite similar to the two antibodies (Figure 1C and D, and EV2B). They further confirmed that 10B3 recognizes membrane PSMA on SCC cancer cells by double-color immunofluorescence using 10B3 and an antibody against membrane-associated epithelial cell adhesion (EpCAM) molecules (Figure EV3B). 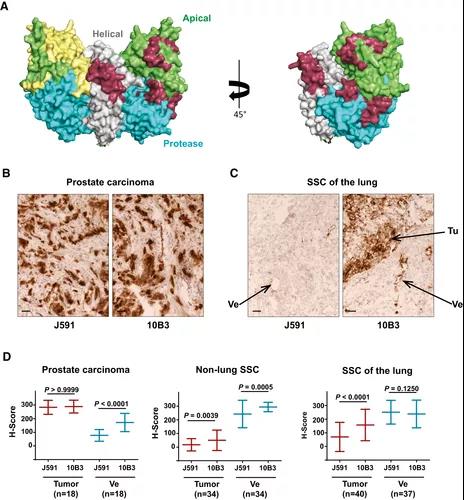 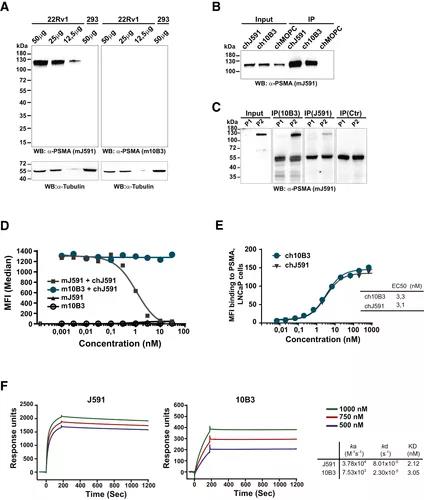 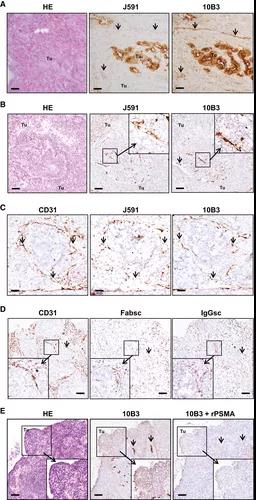 In terms of anti-tumor activity in vitro, for analysis of T cell activation, tumor cell killing and cytokine release, 22Rv1low and LNCaP cells express approximately 3,000 and 40,000. The PSMA molecule of each cell was used as the target (see Materials and Methods for explanation of PSMA expression during 22Rv1 cell culture).

In the presence of LNCaP cells, the maximum T cell activation and tumor cell depletion were induced by two BSs at a concentration of about 10pM, and the PBMC:target ratio was 4:1. Importantly, IgGsc molecules did not induce any undesired T cell activation in the absence of target cells, while Fabsc reagents always induced non-specific proliferation of T cells at a concentration of >0.1 μg/ml, accompanied by moderate cytokines. freed.

In vivo pharmacokinetics and anti-tumor activity, the chelating agent p-NCS-Bn-NODAGA was used to label these two antibodies with 64Cu, and it was proved that the conjugation process neither affects the binding to PSMA or CD3 expressing cells, nor does it affect T cell activation in the presence of PSMA-expressed target cells.

Subsequently, two different mouse models were used to study the in vivo anti-tumor activity of the constructs. After 21 days, the number of metastatic cells in the lungs of the animals was measured by flow cytometry. In this model, the activity of IgG molecules is significantly better than that of smaller molecules, although the Fabsc reagent is repeatedly injected to compensate for its lower serum half-life. Next, we adopted a second tumor model in which large tumors are being treated Established before.

LNCaP cells were injected into the right wing of the animal, and treatment was started when the tumor diameter reached 5 mm. Mice treated with IgGsc molecules experienced complete and long-lasting tumor regression when they were applied three times a week with human PBMC at a relatively low dose of 2 micrograms.

First application in the human body

After the completion of GMP production, public funds provided by the Helmholtz Association were used, and the IgGsc protein was designated as CC-1. Applied to 3 patients with metastatic prostate cancer resistant to standard treatments.

Before treatment, all patients received MRT and PET scans with a PSMA-specific tracer, which confirmed the PSMA expression in multiple tumor sites. Then apply CC-1 in the process of individualized experimental treatment methods, using a daily dose upgrade from 20-40μg to 2.6mg.

In order to prevent the clinically relevant cytokine release syndrome (CRS), the anti-IL-6R antibody Tocilizumab should be used immediately once fever ≥38.5° appears for the first time. Compared with the intravenous injection of steroids widely used to prevent CRS, toxelizumab does not interfere with T cell activation in vitro and in vivo.

Under these conditions, the serum concentration of CC-1 is as high as 200-500 ng/ml, which is more than two orders of magnitude higher than the concentration achieved by the benchmark bsAb Blinatumomab. Patient 1 had no related side effects, and patient 3 developed urticaria, which resolved after topical steroids.

Patient 2 developed pulmonary edema and eventually needed high-dose intravenous steroid therapy to fully recover. It is worth noting that retrospective analysis found that the patient had undergone allogeneic stem cell transplantation due to hematopoietic malignancies. The original human antibody may enhance the elimination of CC-1, but importantly, it also enhanced The protective antibody tocilizumab.

In all patients, profound T cell activation and a rapid and significant decrease in PSA levels were observed, which rose again 20-30 days after cessation of CC-1 treatment.

This article explores the issue of bispecific antibodies (bsAbs) related to tumors.
The target antigen and T cell receptor (TCR)/CD3 complex can redirect T cells to fight cancer cells, sometimes leading to complete rebirth, as observed in patients with B-cell-derived leukemia. However, the activating effect of bsAb on solid tumors is not so impressive, which may be due to the limited accessibility of such tumors to T cells. For this reason, the ideal target antigen must not only be expressed on tumor cells, but also on tumor blood vessels to allow immune cells to fully influx into damaged blood vessels (dual targeting).

The result of the experiment is:

Prostate-specific membrane antigen (PSMA) is expressed on prostate cancer cells and vascular cells of many solid tumor types. We have generated a PSMA antibody that recognizes a conformational epitope and seems to be particularly suitable for dual targeting. We have used this antibody to construct two different formats of bs antibodies based on Fab and IgG scaffolds (Fabsc and IgGsc). The anti-tumor activities of these two molecules in vitro are comparable. In vivo, IgGsc is more efficient due to its longer half-life and better tumor localization.

They have developed an IgG-derived bispecific antibody to improve dual targeting of PSMA-expressing tumors. The GMP-compliant production has been completed, and the first human-based study (NCT04104607) in patients with anterior tooth cancer is underway.