Janssen Pharmaceuticals, a subsidiary of Johnson & Johnson (JNJ), recently announced the first human dose of talentamab (JNJ-64407564) for the treatment of relapsed or refractory multiple myeloma (R/R MM) at the 62nd Annual Meeting of the American Society of Hematology (ASH) Preliminary data for incremental research. The results showed that at the recommended phase 2 dose (RP2D) for subcutaneous (SC) administration, the overall response rate (ORR) of the talentamab treatment reached 69%.

Ajai Chari, director of clinical research for the Multiple Myeloma Project of the Mount Sinai Cancer Clinical Trials Office, said: “There is an urgent need to continue to innovate multiple myeloma treatment methods, especially for those who have received other therapies to relapse. Encouraging. The overall response rate and safety data from the Phase I study support further research into the monotherapy and combination therapy of talquetamab in a patient population with few treatment options.”

Dr. Yusri Elsayed, Global Head of Hematology Malignancies at Janssen Research and Development, said: “GPRC5D is a new target for the treatment of multiple myeloma. As a bispecific antibody, by targeting CD3 to bind to T cells, talquetamab is becoming an excessive prognosis. A potential treatment option for treating patients. Based on the preliminary efficacy, safety, pharmacokinetic and pharmacodynamic data provided today, we are committed to fully exploring the prospects of talentamab in the treatment of multiple myeloma.” 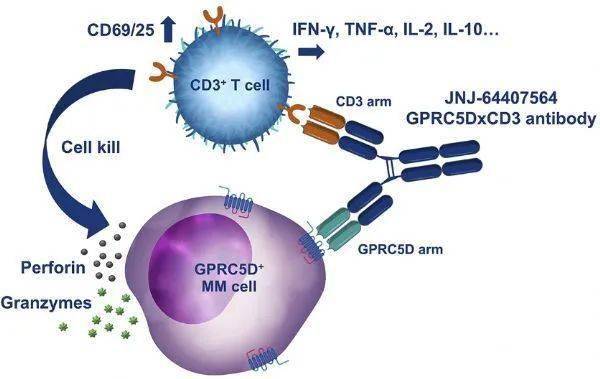 The phase I study announced at the meeting enrolled 157 patients with multiple myeloma (MM) who have received any existing therapies but have progressed or are intolerant. The median number of previous treatment options received is 6 types (range: 2-20), 87% are ineffective to the last treatment regimen, 82% are refractory to Class III drugs, and 33% are refractory to five types (for ≥2 immunomodulators, ≥2 Proteasome inhibitor (PI) and an anti-CD38 therapy are ineffective). The study is divided into two parts: dose escalation (part one) and dose extension (part two).

In the study, the therapeutic dose of talquetamab is: intravenous (IV) dose of 1-180μg/kg, subcutaneous (SC) dose of 5-800μg/kg. The results of the first part of the study showed that patients treated with talltaamab showed treatment responses in each dose group; at all doses, the median time from treatment to the first confirmation of response was 1 month (range: 0.2-3).

The researchers determined that the RP2D for SC administration was 405μg/kg, and concluded that SC administration therapy may provide an opportunity for lower dosing frequency than IV formulations. Treatment response was observed in 6/9 of three types of refractory patients and 2/2 of five-fold refractory patients. The pharmacokinetic results indicate the target exposure level at the RP2D dose. When RP2D was 405 μg/kg SC, the pharmacodynamic data showed sustained T cell activation, cytokine production and redistribution.