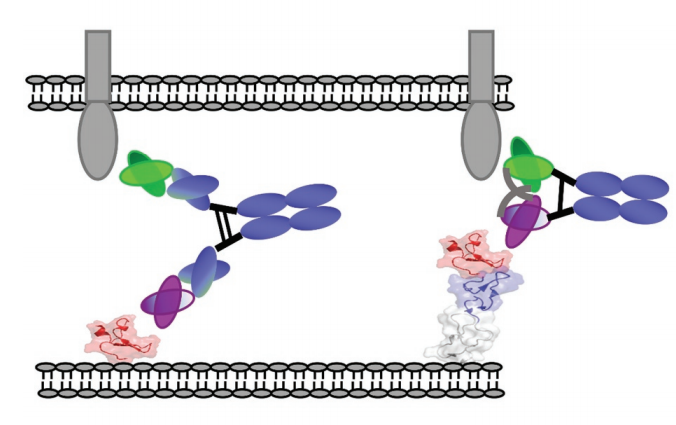 The success of blinatumomab in the treatment of relapsed or refractory acute lymphoblastic leukemia has made T cell-directed therapy based on bispecific antibodies a hot spot in the development of tumor immunotherapy drugs.

This molecular structure connects T cells and tumor cells by interacting with CD3 on T cells and tumor-associated antigen (TAA) on cancer cells. By bypassing MHC/TCR recognition, this method can induce T cell activation without clonal restrictions and overcome tumor immune escape due to down-regulation of MHC expression.

In recent years, with continuous breakthroughs in double antibody expression and purification technology, double antibodies have developed nearly 70 structures, and different structures produce different antigen recognition arm distances. Considering that the geometric configuration may play a key role in the formation of immune synapses, by constructing two different forms of bispecific antibody models: diabody FC (DbFc) and IgG-based molecular models, the study found that IgG molecules with longer binding arms The structure is more effective for epitopes at the proximal end of the membrane, and DbFc with shorter binding arms is more effective for epitopes at the far end of the membrane.

The form of double antibody depends on the purpose of action

With the development of recombinant protein expression technology and antibody engineering technology, many different antibody forms have been produced. The optimal antibody structure depends on the desired biological effect and its underlying structural conditions. Multispecific antibodies are used for various purposes, including receptor activation, blocking, internalization, aggregation, binding of membrane-associated proteins, or targeted targeting of cytotoxic effector cells.

cSMAC is surrounded by surrounding SMAC (pSMAC), which contains many adhesion molecules, which mediate cell-cell binding (such as LFA1). The distal ring (dSMAC) includes inhibitory tyrosine phosphatase CD45 and dynamic actin. The membrane distance between APC and T cell is about 13-15nm. Experiments have shown that an elongated membrane spacing reduces T cell activation, indicating that a closer distance is necessary to properly induce T cell activation.

It is well known that BsAb promotes the formation of regular cytolytic immune synapses by simultaneously binding the TCR subunits CD3ε and TAA on target cells. The artificial immune synapse is a highly organized structure with the same characteristics as the physiological topology. The membrane distance between tumor and T cell is very important, therefore, antibody size is a key parameter for synapse formation.

In order to compare the relationship between the binding arms of different double antibody forms and the ability to form artificial immune synapses to induce T cell activation, the experimenters designed a new bispecific diabody Fc (DbFc) format, which uses a more compact structure. type. Compared with the IgG-based molecular format, the distance between the two antigen recognition arms is estimated to be 3–6 nm and 9–15 nm, respectively. 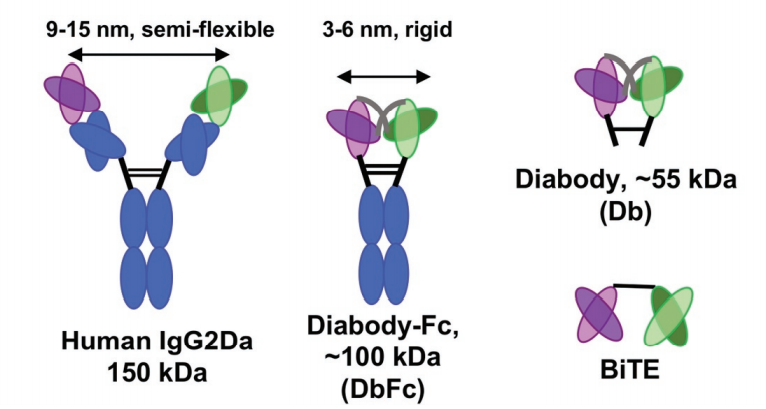 In addition, in order to systematically study the role of epitope position in T cell-directed therapy, the experimenters designed a series of cell lines expressing BCMA antigen by using epidermal growth factor (EGF)-like domain as a relatively rigid structural spacer. These cell lines use different EGF-like domains as tethers to increase the distance to the target cell membrane.

The study found that at a 24-hour effector-to-target ratio (E:T ratio) of 5:1, all three molecules showed almost equal activity in inducing the lysis of T0 cell lines, and T0 cell lines showed BCMA on the cell surface. There is no tethering. As the distance to the cell surface increases with the increase in the number of EGF-like domains, the ability of bispecific IgG2 to induce the directed lysis of T cells rapidly weakens, while Db and DbFc show quite strong cells in cell lines T0 to T5 Toxicity, the potency in T6 and T7 is significantly reduced.

This indicates that the proximity of T cells to target cells by bispecific antibody molecules has an important impact on the efficiency of immune synapse formation. The difference between full-length IgG and Db-derived molecules can be explained by the arm spacing of the two antigen binding sites, because Db and DbFc are more rigid and compact, resulting in a relatively short distance between T cells and antigen-expressing cells. When the distance threshold for T cell activation is exceeded, the killing function of the double antibody will be significantly reduced.

Then the experimenters checked the opposite situation. The epitope is located in the proximal region of the membrane and is covered by a different number of structural units on it.

In the MOv cell line without any masking, the two molecules showed almost indistinguishable EC50 and Emax at 15 hours and 24 hours. The 24-hour data clearly showed a higher maximum killing rate and a significant left shift. EC50. For M2v and M4v, at the 15-hour time point, DbFc activity was significantly lower than that of IgG-based molecules.

However, the dose-response curves of these two molecules tend to be the same at 24 hours. This result may be due to the difference in the kinetics of T cell activation. In a long enough time, the EGF-like domain may have a certain degree of structural flexibility. Sex, allowing exposure of the BCMA antigen at the proximal end of the membrane. For the M7v cell line, even at 24 hours, the Emax of DbFc is stable at about 50%, which is lower than that of IgG-based molecules, indicating that in this case, even flexibility cannot overcome steric hindrance to compensate for DbFc bridging CD3 And the low probability of BCMA.

In order to understand how the epitope position affects the cell-killing activity of the double antibody, the experimenters designed and studied a variety of FLT3/CD3 bispecific antibody molecules on the EoL1 acute myeloid leukemia (AML) cell line that overexpresses FLT3. FLT3 is a receptor tyrosine kinase whose extracellular domain consists of five Ig-like domains.

The results showed that, consistent with the research results of a series of engineered cell lines expressing BCMA, the bispecific molecules targeting different domains of FLT3 showed significantly different cytotoxicity, which was strongly affected by the molecular form. DbFc, which targets the membrane distal domains D1 and D3, mediates more effective cytotoxicity than its IgG counterparts, possibly due to its ability to bind the two cell membranes tightly.

On the other hand, IgG bispecific molecules directed against membrane proximal domains D4 and D5 induce specific target cell lysis, while for the same anti-FLT3 antibody in the form of DbFc, no significant cytotoxicity was observed at concentrations up to 10 nM .

By using two types of double antibodies (based on IgG and DbFc), the relationship between the epitope position and the in vitro potency of the double antibody molecules to activate T cells was studied. Studies have found that when the epitope is located in the distal region of the membrane, the DbFc format is more effective, while the IgG-based bispecific molecule is more effective for the proximal epitope masked by other domains.

In addition, in a more biologically relevant context, bispecific molecules targeting different domains of the FTL3 antigen confirmed these findings. Therefore, when designing double antibody molecules for T cell-directed therapy, in addition to considering the affinity, molecular form, and antigen characteristics of the antibody, it is also necessary to pay attention to the relationship between different double antibody forms and the position of the antigen binding epitope.