Relationship between vascular aging and arteriosclerosis

Relationship between vascular aging and arteriosclerosis. Aging uses a variety of complex ways to gradually stiffen the originally young, vigorous and elastic blood vessels.Scientists estimate that the total length of all blood vessels in the human body can reach 96,000 kilometers. The survival of every cell in the body depends on blood.

Blood vessels are the river of life. Just as William Osler, the founder of modern medicine, said “A man is only as old as his arteries”, it reveals the importance of vascular aging for health and longevity. Although the aging of life is irresistible, it is not a dream to make blood vessels young.

With the development of gerontological research, “people and blood vessels are the same old” has been confirmed by more and more research results.

As the aging of the global population spreads and deepens, vascular aging-related diseases are widespread among the elderly.

Recently, the team of Professor Liu Youshuo from the Institute of Aging and Geriatric Diseases of Central South University and the Department of Geriatrics of the Second Xiangya Hospital of Central South University published in the journal “Ageing research reviews” (IF=10.616, JCR1 area, ranked 1/ 34, Neuroscience 1/142) published a review article “Roles and mechanisms of MFG-E8 in vascular aging-related diseases”. 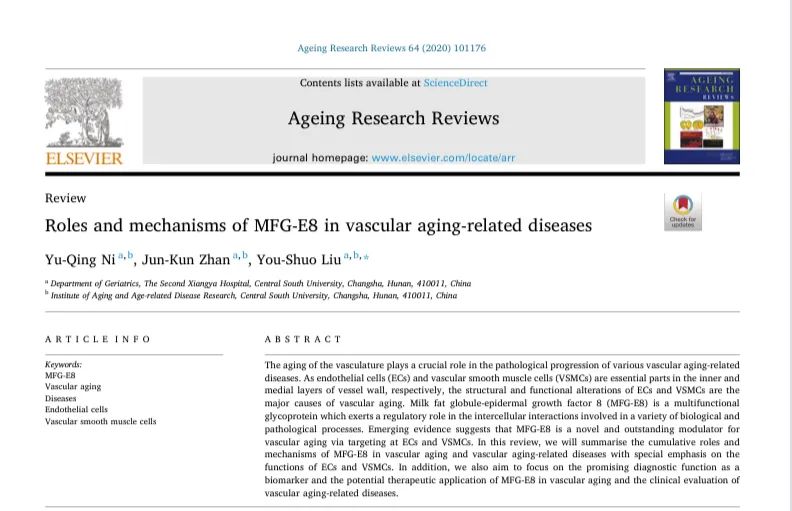 It is necessary to untie the “indissoluble bond” between vascular aging and arteriosclerosis, and to understand the role of various internal factors in the process of vascular aging. Various external factors (such as high blood sugar, high blood pressure, high blood fat, high uric acid, low Exercise, smoking, drinking, anxiety, etc.) and why are the effective methods of treating vascular diseases for young people not effective for the elderly?
The Liu Youshuo team from the Department of Geriatrics of the Second Xiangya Hospital explained this way:

Morphologically, aging blood vessels are characterized by increased deposition of collagen fibers, increased and disordered elastic fibers, disordered arrangement of smooth muscle cells and thickening of the intima; functionally manifested by increased stiffness, decreased sensitivity to vasodilator factors, and The sensitivity of vasoconstrictor factors increases and the angiogenesis capacity decreases.
Vascular aging increases the susceptibility to hypertension and arteriosclerosis.

How to delay vascular aging?

“Strategies to delay vascular aging” refer to strategies that intervene in the process of vascular aging at the molecular, cellular, tissue, organ and overall levels, delay the occurrence and development of age-related diseases, and thereby prolong healthy span.

Focusing on the key findings of anti-aging strategies in the past century, exercise, diet and other good lifestyles are currently proven interventions that have significant effects. They can reduce the incidence of aging-related diseases after middle age, improve the quality of life, and increase For the average or maximum human life span, further study of its molecular mechanism is of far-reaching significance.

But these strategies are not enough to prevent the progress of aging-related diseases and promote healthy aging. Therefore,
More research has begun to pay attention to the influence of some small molecule compounds or natural molecules on the aging process and the occurrence and development of senile diseases, which has become one of the most popular areas of life science research.

The mechanism of vascular aging

The mechanism of vascular aging is an intricate network regulation from tissue to cell and molecular level. It involves multiple mechanisms and multiple diseases. Understanding at any level alone is one-sided and limited. The current understanding is still at a low level.

More and more evidences show that senescent cells have harmful effects during the aging process. The elimination of senescent cells in animal models has been proven to improve aging-related diseases and bring dawn to clinical intervention.
Vascular senescence is the result of senescence of vascular endothelial cells and smooth muscle cells, and its senescence is regulated by the interaction of environment and genes.

Stress-induced aging is related to the accumulation of harmful components in the blood. Telomere-independent events include chemical induction, pre-oncogene induction, changes in the nucleus and nuclear fibrils, DNA damage, etc., which lead to premature cell aging, involving intercellular communication and appearance. Genetics, numerous signal pathways, etc., are currently the focus of research on the mechanism of vascular aging.

What are diseases related to vascular aging?

How to evaluate vascular aging clinically?

With the deepening of research, it is found that calorie restriction, antioxidants, sirolimus (mTOR inhibitor), resveratrol (Sirt1 activator), metformin, and plasma therapy may all have a certain effect on delaying vascular aging.

Aging takes many complex ways to make the originally young, vigorous and elastic blood vessels gradually stiffen. One day, it will cause the damage of various vital organs of the body and develop into arteriosclerosis. He has been treated in various hospitals for decades. In the “entanglement” of vascular aging and arteriosclerosis, any single factor is unlikely to be the dominant pathophysiological mechanism.